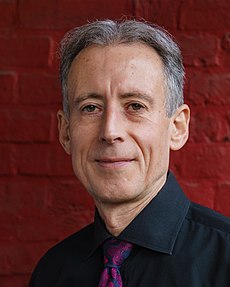 The Peter Tatchell Foundation (PTF) is a non-profit, nonpartisan organisation based in the United Kingdom and named after its director, human rights activist Peter Tatchell. It "seeks to promote and protect the human rights of individuals, communities and nations, in the UK and internationally, in accordance with established national and international human rights law" and its stated aims and objectives are "to raise awareness, understanding, protection and implementation of human rights, in the UK and worldwide".[1]

In 2012 the foundation gained funding from The Funding Network for three projects: "Casework & Advice", including adding an "Advice" section to its website; "Equal Love", campaigning on same-sex marriage and opposite-sex civil partnerships; and "Olympic Equality Initiative", working against sexism and homophobia in the Olympic movement.[3]

The organisation was named after Peter Tatchell to honour his 50+ years of globally campaigning for human rights.[4]

Activist Peter Tatchell started the Foundation as a company in 2011,[5] which gained charitable status in 2018.[6]

Other articles of the topic Organized labour : United Steelworkers, Starbucks Workers Union, 2008 GO Wellington dispute, AFL-CIO, Federation of Independent Trade Unions of Moldova, Big labor, Recognition strike
Some use of "" in your query was not closed by a matching "". Official website

Share
Retrieved from "https://en.everybodywiki.com/index.php?title=Peter_Tatchell_Foundation&oldid=1761437"
Categories:
Hidden categories:
This page was last edited on 11 June 2021, at 10:57.
Content is available under License CC BY-SA 3.0 unless otherwise noted.
This page has been accessed 304 times.
Privacy policy
About EverybodyWiki Bios & Wiki
Disclaimers