Philip Schram is an expert on French vintage cars, especially the Le Zebre. He is also one of the owners of Buffalo Wings & Rings, a restaurant franchise based in Cincinnati, Ohio. 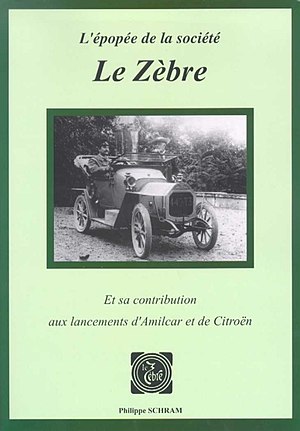 In 1997, Schram published the first book ever written about the Le Zebre, a French make manufactured between 1909 and 1931 in Suresnes, Hauts-de-Seine, near Paris.[1][2][3] It is currently in its fifth printing. In 2012, a German version was co-authored with Marek Hötzelt & Schram de:Le Zèbre.

For the 100th anniversary in 2009 of the Le Zebre, Schram organized the rally of owners of vintage Le Zebres.[4][5] It has become an annual event. In 2015, 45,918 visitors attended, while 534 national exhibitors and 56 foreign exhibitors participated.[6]

In 2012, the city of Suresnes, where many automotive companies were headquartered, asked Schram to release his Le Zebre content to assist the city with organizing a yearly exhibit "Suresnes Auto Retro". [7] The event promotes the car brands headquartered in Suresnes.

Schram manages the online photo archive for Le Zebre and Amilcar. He authored two books about drivers of the Le Zebre, which are available through the photo archive site.[8] [9]

Schram collaborated on Les Ornais Celebres (The Orne Celebrities) in 2010 as a contributor of photographs and knowledge about Joseph Lamy, a famous resident of France's Orne region and key executive at Le Zebre and Amilcar.[10]

In 2005, Schram invested in the restaurant franchise Buffalo Wings and Rings in Cincinnati, Ohio. He is the chief development officer and spokesperson for the company.

In 2008 he was nominated for the Ernst & Young Entrepreneur of the Year Award, and his restaurant chain was ranked at the fastest growing restaurant chain in the United States that year.[11]

Magazines in the franchise industry interview him for opinion pieces, [12][13] [14][15][16] and he was one of the speakers at the International Franchise Association’s “Emerging Franchisor Conference 2017.” [17] He is a spokesperson for multi-unit franchising.[18]

Retrieved from "https://en.everybodywiki.com/index.php?title=Philip_Schram&oldid=944237"
Category:
Hidden categories:
This page was last edited on 11 August 2020, at 09:43.
This page has been accessed 572 times.
Content is available under License CC BY-SA 3.0 unless otherwise noted.
Privacy policy
About EverybodyWiki Bios & Wiki
Disclaimers
Mobile view