While cats have a variety of breeds and coats, pink is not a natural colour among them. Nevertheless, several instances of pink cats have been reported by the media, sometimes as a result of interference with chemicals or dyes. Additionally, several fictional pink cats have been used in popular culture.

In September 2005, a cat, Brumas, briefly left his owners in Launceston, Cornwall, and returned with his fur coloured pink. The cause of the colour change was not identified, but Brumas was examined by the RSPCA and found to have no toxins.[1]

In September 2010, a cat with dyed pink fur was discovered in Swindon. The RSPCA called the dyeing a "sick prank" and were unable to wash the colour out of the cat's fur, though no side-effects were observed.[2] The event made worldwide news,[3] before the owner came forward and said the cat had been dyed pink using food colouring because she was a fan of the colour.[4] She said the act "seemed like a good idea. I always wanted a pink animal – a bit like my hair" and insisted she read the instructions carefully, knowing that the colouring could not be toxic as it was intended for human consumption.[5] The RSPCA later confirmed they would not press charges.[6]

In May 2011, four kittens were found abandoned in a concrete factory in Redruth, Cornwall, one of which had pink fur. The charity Cats Protection attempted to wash out the colour with shampoo, but were unsuccessful.[7]

In 2010, a report showed pollution from the Port Talbot Steelworks in Wales has turned cats both grey and pink.[8] 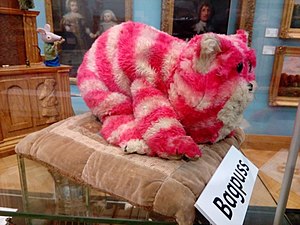 Bagpuss was supposed to be a marmalade cat, but the puppet was accidentally dyed pink.

The Pink Panther is a cartoon character created by Friz Freleng. As well as featuring in the opening titles of the Peter Sellers starring films, he has appeared in spin-off cartoon series. Animation historian Jerry Beck has said the character is "anti-authority – he’s cool yet he’s pink".[9]

The title character of the children's television series Bagpuss was a pink cat. The puppet used for animation was originally supposed to be marmalade, but was dyed pink accidentally during the manufacturing process.[10] Another children's television series, Roobarb and Custard featured a pink cat, Custard. Creator Grange Calveley based Custard's mannerisms on Sid James.[11]

This article "Pink cat" is from Wikipedia. The list of its authors can be seen in its historical and/or the page Edithistory:Pink cat. Articles copied from Draft Namespace on Wikipedia could be seen on the Draft Namespace of Wikipedia and not main one.

Retrieved from "https://en.everybodywiki.com/index.php?title=Pink_cat&oldid=944702"
Categories:
This page was last edited on 11 August 2020, at 13:58.
This page has been accessed 135 times.
Content is available under License CC BY-SA 3.0 unless otherwise noted.
Privacy policy
About EverybodyWiki Bios & Wiki
Disclaimers