Lua error in Module:Effective_protection_level at line 16: attempt to index field 'FlaggedRevs' (a nil value). A school prank is a prank primarily occurring in a school setting. The effect and intent of school pranks may range from everyday play and consensual bonding behavior to crimes including hazing, bullying and assault, including sexual assault. 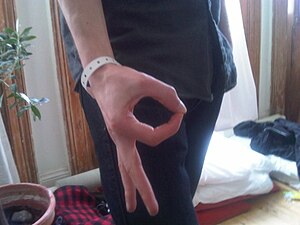 The objective of the "circle game" or "basic killer"[1][2] is to form a circle with one's thumb and forefinger (the "OK" gesture) on the leg below the waist and get someone else to look at it.[2] If the person looks, the gesture-maker gets to hit them,[1] or is simply considered "out" or "killed".[2] In some variations the target can put their index finger through the hole without looking at it and thereby win the right to punch the maker of the gesture.[1]

The heel of the victim is trodden upon, which may cause the victim to fall. Stepping on the rear portion of the shoe as the foot lifts and thereby removing it is also a "heels" variant known as a "flat tire" or "score". A variant is to kick one's heel forwards as it lifts, known as an "airwalk".[3]

This is a prank done by grasping the victim's forearm firmly in both hands, and then twisting the hands in opposite directions about the victim's arm to stretch his or her skin, making it red and sore.[3]

Known primarily as a "Chinese burn" or a "snake bite" in the United Kingdom, Ireland, Australia, "donkey bite" or "Chinese bangle" in South Africa, "buffalo skin" in India, "snake bite", "Chinese Sunburn" or "Indian rub" in Canada, and "Indian burn", "Indian sunburn" or "Indian rug burn" in New Zealand and the United States (except in some midwest states such as Wisconsin and Illinois where it is known as a snakebite), "Indian burn" or "les orties" in France, "policeman's glove" or "hundred needles" in Hungary, "barbed wire" in the Netherlands, "needles" in Romania and Bulgaria and "Brennnessel" ("stinging nettle") in Austria, Switzerland and the southern parts of Germany, "thousand needle stings" in the northern parts of Germany, “el hormiguero” (anthill) in Costa Rica, "manita de puerco" (pork's little hand) in Mexico, "little fire" in the Czech Republic, "thousand needles" in Sweden, "Nettle" in Estonia, Latvia, Lithuania, Poland and Russia, "French cuff" in Norway and Denmark, "kuuma makkara" (hot sausage), "intiaanihieronta" (Indian massage) or "nokkonen" (nettle) in Finland and again "snakebite" in Flanders.[citation needed]

"Kick Me" or other signs[edit]

1901 cartoon of a man being punished in Hell for his selfishness in life, forced to wear mismatched clothes and a "Kick Me" sign

A note, commonly reading "Kick Me", is attached to the back of an unsuspecting victim. This prank may be performed with Post-it Notes or other items, such as paper and tape.[3]

"Mooning" is displaying one's bared buttocks to someone, so-called because the buttocks are generally not suntanned, so resemble a full moon. It is commonly performed out of windows of moving buses and cars.

Sometimes called a Monkey Scrub, Hippo Handing or Russian Haircut, a noogie is performed when the middle knuckles of the fore and middle fingers are rubbed vigorously against the surface of the scalp, stretching the skin and pulling the hair. A headlock may be applied for more exact or prolonged execution. This will trap the victim. The headlock noogie is called "La Savonette du Chef" ("The chief's bath soap") in the area around Toulon, France.

Also described as a 'Skully' in Australian Playgrounds circa 1980's. An open-hand variant known as the Dutch Rub is performed with the heel of the hand. In Czech Republic noogie is called "peanut".[3]

Pantsing (also known as "flagging", "depantsing", and various other names) is the act of pulling down a person's trousers and sometimes also the person's underpants, which reveals the person's genitalia. The most common method is to sneak up behind the intended victim, grab the waistband of the garment, and apply a quick downward tug before the victim becomes aware.[3]

This prank involves the tying of a victim's shoe laces together, typically while the victim is seated and distracted. The laces may also be tied to a nearby object such as a chair leg. This may cause the victim to unexpectedly trip or stumble when attempting to get up and move. This prank may be combined with a taunt or additional prank designed to provoke the victim into getting up and running after the prankster, resulting in a more pronounced effect. A related but more destructive prank involves secretly cutting the shoelaces with scissors.[3]

Another variant of this prank involves tying another student's backpack to a table. This is often done at lunch time to cause panic when the bell rings for students to go back to class and the victims only then realize their predicament.

Apple-pie (UK) or short-sheet (US) bed is a prank done at boarding schools, college dorms, camps or on excursions where children sleep in full beds (also common in the military services). A bed sheet is untucked at the head end of the bed and folded, making it look as if it is two sheets (an undersheet and top sheet). The victim will find that he or she cannot get into bed (as doing this "shortens" the bed length). Also known as a 'wallet bed' (lit en portefeuille) in France and as an 'apple-pie bed' in the UK.[3] An apple-pie bed sometimes involves sewing up the sheets with a needle and thread so that it is impossible for the prankee to get in, and requires a degree of effort to make the bed usable again.

A "spitball" is a clump of paper that the prankster has chewed and made wet with saliva, to be thrown, spat, or blown at a person or object. If not removed from some types of surface, they dry and harden into a sort of paper cement. Small spitballs are often propelled by placing them in a straw or the shaft of a disassembled hollow pen and blowing through the other end. Larger spitballs are sometimes flicked with the fingers, a flexible ruler or through the use of a rubber band. Sometimes, whole sheets of paper are crumpled and inserted into the mouth for a period of up to five minutes to form a large spitball that is usually thrown manually.[3]

The act of holding the victim upside down and dunking their head in a toilet bowl while flushing water. Instances of swirling have been prosecuted in courts.[6][7]

Also known as a "towel whip", "towel whipping", a "rat-tail", or "rat-tailing", "kangaroo tail" in Australia, "cat tail" or "skaapstert" (Afrikaans, lit. "sheep's tail") in South Africa, the prankster twists a towel along the diagonal (typically dampened to hold its shape) by spinning it at the corner, making it into a whip with a towel corner at the tip. The prankster then "snaps" the towel as if cracking a whip, striking the victim with the end tip of the towel and causing pain. This prank is usually performed in communal showers, where wet towels are plentiful and bare skin provides opportunity to maximize the pain inflicted.[3]

A wedgie (sometimes also known as a "gotchie", a "snuggy", "grundy" or "melvin" and in instances where the undergarments are torn off, a "Chinese Laundry") is any one of a variety of pranks involving pulling the victim's underwear up so that it wedges between the buttocks and may even be performed to the extent that the victim's underpants are torn off. The victim's underwear may also be hung on something in a more extreme form of this prank. A wedgie may be performed by one attacker, or by a group. In April 2006, an Albany, New York teacher was arrested for endangering the welfare of a child by giving the 10-year-old student a wedgie.[3][8]

A prank whereby an assailant moistens one of their fingers with saliva, quietly sneaks up behind a victim and inserts the finger into the victim's ear hole.

Retrieved from "https://en.everybodywiki.com/index.php?title=List_of_school_pranks&oldid=607580"
Categories:
Hidden categories:
This page was last edited on 14 January 2020, at 03:32.
This page has been accessed 238 times.
Content is available under License CC BY-SA 3.0 unless otherwise noted.
Privacy policy
About EverybodyWiki Bios & Wiki
Disclaimers