Prasant Payyappilly Palakkappilly (born 29 September 1964) is a Syro-Malabar priest, social activist and environmentalist from the Indian state of Kerala.[2][3][4] He is currently serving as the Principal of Sacred Heart College, Thevara.[2][3][5][6][7][8] 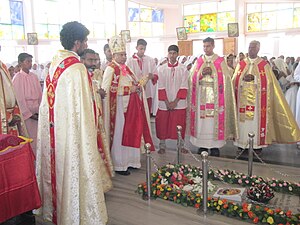 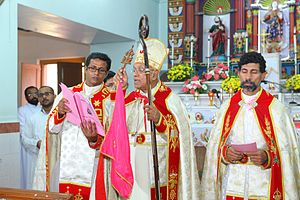 Fr. Palakkappilly did his schooling at Sacred Heart High School, Thevara. Later he decided to join C. M. I., a Syro-Malabar congregation for men. He did Philosophy and Theology studies from Dharmaram Vidya Kshetram, Bangalore and was ordained a priest on 28 December 1994.[9] He took Master's degree in Social Work from Tata Institute of Social Sciences in 1997 and Ph. D in Social Work from Rajagiri College of Social Sciences in 2007.

Fr. Palakkappilly served as the head of the School of Social Work of Rajagiri College of Social Sciences from 2007 to 2010.[14] During his tenure in Rajagiri, he turned around 22 acres of land to lush greenery and named the whole project, Environmental Lesson.[3] He was also instrumental in starting several environmental initiatives like setting up of micro forests and other forestation efforts, water conservation projects and introduction of waste management systems. As a result, in 2009, Rajagiri College won the Haritha Award by the Kerala State Biodiversity Board for the best environmental initiatives in the state.[3]

In 2010, Fr. Palakkappilly was appointed as the Principal of Sacred Heart College, Thevara. He started a new trend in the college by cultivating paddy in a small piece of land, and now it has practising organic farming on four acres of land.[3][15][16][17] In 2014, under his leaderhip, the college became one among the first five autonomous colleges in Kerala.[18] Fr. Palakkappilly is also part of numerous human rights, child rights and environmental organisations in Kerala.[19]

Since 2012 he has been heading Organic Kerala Charitable Trust, the environment initiative focusing on healthy and safe food and Organic Farming. The College is a partner organisation of the green initiative. He was elected as the President of Kerala Association of Professional Social Workers, the professional organisation of Professional Social Workers of Kerala, with chapters across the state. Recognizing the efforts of Sacred Heart College, Kerala Bio-diversity Board conferred Green Campus Award on SH college on June 5, 2018. Under his guidance, in 2018 September, Sacred Heart College received the best college award among the Catholic Colleges of India instituted by Xavier Board of Higher Education, and he was honoured with best principal award by All India Association of Christian Colleges (AIACHE) in 2018 January.

You have to Sign in or create an account to comment this article !
Retrieved from "https://en.everybodywiki.com/index.php?title=Prasant_Palakkappilly&oldid=252838"
Categories:
Hidden categories:
This page was last edited on 25 November 2018, at 08:16.
This page has been accessed 474 times.
Content is available under License CC BY-SA 3.0 unless otherwise noted.
Privacy policy
About EverybodyWiki Bios & Wiki
Disclaimers
Mobile view