Rights are legal, social, or ethical principles of freedom or entitlement; that is, rights are the fundamental normative rules about what is allowed of people or owed to people according to some legal system, social convention, or ethical theory.[1] Rights are of essential importance in such disciplines as law and ethics, especially theories of justice and deontology.

Rights are fundamental to any civilization and the history of social conflicts is often bound up with attempts both to define and to redefine them. According to the Stanford Encyclopedia of Philosophy, "rights structure the form of governments, the content of laws, and the shape of morality as it is currently perceived".[1] 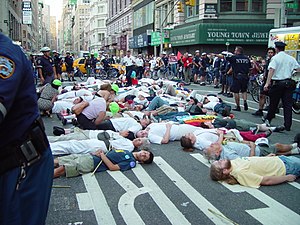 Rights are widely regarded as the basis of law, but what if laws are bad? Some theorists suggest civil disobedience is, itself, a right, and it was advocated by thinkers such as Henry David Thoreau, Martin Luther King Jr., and Mohandas Karamchand Gandhi.

There is considerable disagreement about what is meant precisely by the term rights. It has been used by different groups and thinkers for different purposes, with different and sometimes opposing definitions, and the precise definition of this principle, beyond having something to do with normative rules of some sort or another, is controversial.

One way to get an idea of the multiple understandings and senses of the term is to consider different ways it is used. Many diverse things are claimed as rights:

A right to life, a right to choose; a right to vote, to work, to strike; a right to one phone call, to dissolve parliament, to operate a forklift, to asylum, to equal treatment before the law, to feel proud of what one has done; a right to exist, to sentence an offender to death, to launch a nuclear first strike, to carry a concealed weapon, to a distinct genetic identity; a right to believe one's own eyes, to pronounce the couple husband and wife, to be left alone, to go to hell in one's own way.[1]

There are likewise diverse possible ways to categorize rights, such as:

Who is alleged to have the right: Children's rights, animal rights, workers' rights, states' rights, the rights of peoples. What actions or states or objects the asserted right pertains to: Rights of free expression, to pass judgment; rights of privacy, to remain silent; property rights, bodily rights. Why the rightholder (allegedly) has the right: Moral rights spring from moral reasons, legal rights derive from the laws of the society, customary rights are aspects of local customs. How the asserted right can be affected by the rightholder's actions: The inalienable right to life, the forfeitable right to liberty, and the waivable right that a promise be kept.[1]

There has been considerable debate about what this term means within the academic community, particularly within fields such as philosophy, law, deontology, logic, political science, and religion.

According to some views, certain rights derive from deities or nature
Main article: Natural and legal rights

Some thinkers see rights in only one sense while others accept that both senses have a measure of validity. There has been considerable philosophical debate about these senses throughout history. For example, Jeremy Bentham believed that legal rights were the essence of rights, and he denied the existence of natural rights; whereas Thomas Aquinas held that rights purported by positive law but not grounded in natural law were not properly rights at all, but only a facade or pretense of rights.

The general concept of rights is that they are possessed by individuals in the sense that they are permissions and entitlements to do things which other persons, or which governments or authorities, can not infringe. This is the understanding of people such as the author Ayn Rand who argued that only individuals have rights, according to her philosophy known as Objectivism.[4] However, others have argued that there are situations in which a group of persons is thought to have rights, or group rights.[5] Accordingly:

Do groups have rights? Some argue that when soldiers bond in combat, the group becomes like an organism in itself and has rights which trump the rights of any individual soldier.

There can be tension between individual and group rights. A classic instance in which group and individual rights clash is conflicts between unions and their members. For example, individual members of a union may wish a wage higher than the union-negotiated wage, but are prevented from making further requests; in a so-called closed shop which has a union security agreement, only the union has a right to decide matters for the individual union members such as wage rates. So, do the supposed "individual rights" of the workers prevail about the proper wage? Or do the "group rights" of the union regarding the proper wage prevail? Clearly this is a source of tension.

The Austrian School of Economics holds that only individuals think, feel, and act whether or not members of any abstract group. The society should thus according to economists of the school be analyzed starting from the individual. This methodology is called methodological individualism and is used by the economists to justify individual rights.

Other distinctions between rights draw more on historical association or family resemblance than on precise philosophical distinctions. These include the distinction between civil and political rights and economic, social and cultural rights, between which the articles of the Universal Declaration of Human Rights are often divided. Another conception of rights groups them into three generations. These distinctions have much overlap with that between negative and positive rights, as well as between individual rights and group rights, but these groupings are not entirely coextensive.

In the United States, persons who are going to be questioned by police when they are in police custody must be read their "Miranda rights". The Miranda warning requires police officers to read a statement to people being arrested which informs them that they have certain rights, such as the right to remain silent and the right to have an attorney.

Rights are often included in the foundational questions that governments and politics have been designed to deal with. Often the development of these socio-political institutions have formed a dialectical relationship with rights.

Rights about particular issues, or the rights of particular groups, are often areas of special concern. Often these concerns arise when rights come into conflict with other legal or moral issues, sometimes even other rights. Issues of concern have historically included labor rights, LGBT rights, reproductive rights, disability rights, patient rights and prisoners' rights. With increasing monitoring and the information society, information rights, such as the right to privacy are becoming more important.

Some examples of groups whose rights are of particular concern include animals,[6] and amongst humans, groups such as children[7] and youth, parents (both mothers and fathers), and men and women.[8]

Accordingly, politics plays an important role in developing or recognizing the above rights, and the discussion about which behaviors are included as "rights" is an ongoing political topic of importance. The concept of rights varies with political orientation. Positive rights such as a "right to medical care" are emphasized more often by left-leaning thinkers, while right-leaning thinkers place more emphasis on negative rights such as the "right to a fair trial".

Further, the term equality which is often bound up with the meaning of "rights" often depends on one's political orientation. Conservatives and libertarians and advocates of free markets often identify equality with equality of opportunity, and want equal and fair rules in the process of making things, while agreeing that sometimes these fair rules lead to unequal outcomes. In contrast, socialists often identify equality with equality of outcome and see fairness when people have equal amounts of goods and services, and therefore think that people have a right to equal portions of necessities such as health care or economic assistance or housing.[9]

In philosophy, meta-ethics is the branch of ethics that seeks to understand the nature of ethical properties, statements, attitudes, and judgments. Meta-ethics is one of the three branches of ethics generally recognized by philosophers, the others being normative ethics and applied ethics.

Rights ethics has had considerable influence on political and social thinking. The Universal Declaration of Human Rights gives some concrete examples of widely accepted rights.

Some philosophers have criticised rights as ontologically dubious entities. For instance, although in favour of the extension of individual legal rights, the utilitarian philosopher Jeremy Bentham opposed the idea of natural law and natural rights, calling them "nonsense upon stilts".[10] Further, one can question the ability of rights to actually bring about justice for all. 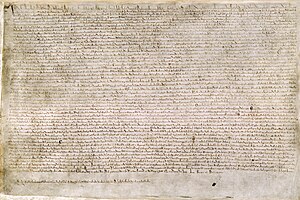 Magna Carta or "The Great Charter" was one of England's first documents containing commitments by a king to his people to respect certain legal rights. It reduced the power of the monarch.

The Declaration of the Rights of Man and of the Citizen in 1789 in France.

The specific enumeration of rights has differed greatly in different periods of history. In many cases, the system of rights promulgated by one group has come into sharp and bitter conflict with that of other groups. In the political sphere, a place in which rights have historically been an important issue, constitutional provisions of various states sometimes address the question of who has what legal rights.

Historically, many notions of rights were authoritarian and hierarchical, with different people granted different rights, and some having more rights than others. For instance, the right of a father to be respected by his son did not indicate a right of the son to receive something in return for that respect; and the divine right of kings, which permitted absolute power over subjects, did not leave much possibility for many rights for the subjects themselves.[11]

In contrast, modern conceptions of rights have often emphasized liberty and equality as among the most important aspects of rights, as was evident in the American and French revolutions.

Important documents in the political history of rights include:

Share
Retrieved from "https://en.everybodywiki.com/index.php?title=Rights&oldid=2108277"
Categories:
Hidden categories:
This page was last edited on 15 October 2021, at 10:29.
Content is available under License CC BY-SA 3.0 unless otherwise noted.
This page has been accessed 193 times.
Privacy policy
About EverybodyWiki Bios & Wiki
Disclaimers