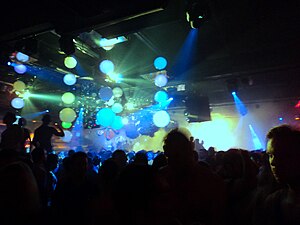 The Week Rio during the New Year's Eve.

Rio de Janeiro Gay New Year's Eve (often just referred to as Rio Gay Reveillon) is a LGBT new year's eve located in Rio de Janeiro, Brazil. Rio is the most disputed Brazilian city to this period of the year, however, other Brazilian cities are increasing to this event, such as Florianópolis.[1]

The Week International, the top gay nightclub in Rio de Janeiro, and Revolution, a big party and pool party, organizes an annual gay new year's eve party event. Rio de Janeiro has always been a favorite destination for gays from Brazil, and in 2009, the city is elected the best LGBT destination in the world.[2] In 2010, the same city also was elected the most sexiest city of the world to LGBTs, according to the U.S. Logo channel and TripOutGayTravel.[3]

Gay communities from different places, local to international people coming in to join the New Year's festivities in Rio de Janeiro know that it is all about parties, everywhere, all night long. There are parties going from local clubs, international bars and even cruise ships, with the ambience of festivity. The gay party events are full of energy, going from huge to the simplest parties. Members of the LGBT community really trust the Brazilian gay party scene for the amazing celebrations most especially the New Year's Eve celebration.[4]

Share
Retrieved from "https://en.everybodywiki.com/index.php?title=Rio_de_Janeiro_Gay_New_Year%27s_Eve&oldid=951729"
Categories:
Hidden category:
This page was last edited on 14 August 2020, at 06:05.
This page has been accessed 536 times.
Content is available under License CC BY-SA 3.0 unless otherwise noted.
Privacy policy
About EverybodyWiki Bios & Wiki
Disclaimers
Dark mode