From EverybodyWiki Bios & Wiki
Jump to:navigation, search
This article is about Planet Earth and all life upon it, including human civilization. For other uses, see Earth or World (disambiguation).

The Blue Marble, a photograph of the planet Earth made on December 7, 1972 by the crew of the Apollo 17 spacecraft 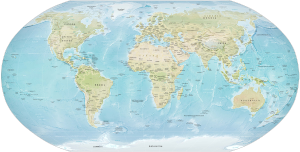 The world is the Earth and all life on it, including human civilization.[1] In a philosophical context, the "world" is the whole of the physical Universe, or an ontological world (the "world" of an individual). In a theological context, the world is the material or the profane sphere, as opposed to the celestial, spiritual, transcendent or sacred spheres. "End of the world" scenarios refer to the end of human history, often in religious contexts.

The history of the world is commonly understood as the history of humanity spanning the major geopolitical developments of about five millennia, from the first civilizations to the present. In terms such as world religion, world language, world government, and world war, the term world suggests an international or intercontinental scope without necessarily implying participation of every part of the world.

The world population is the sum of all human populations at any time; similarly, the world economy is the sum of the economies of all societies or countries, especially in the context of globalization. Terms such as "world championship", "gross world product", and "world flags" imply the sum or combination of all sovereign states.

The corresponding word in Latin is mundus, literally "clean, elegant", itself a loan translation of Greek cosmos "orderly arrangement." While the Germanic word thus reflects a mythological notion of a "domain of Man" (compare Midgard), presumably as opposed to the divine sphere on the one hand and the chthonic sphere of the underworld on the other, the Greco-Latin term expresses a notion of creation as an act of establishing order out of chaos.

"World" distinguishes the entire planet or population from any particular country or region: world affairs pertain not just to one place but to the whole world, and world history is a field of history that examines events from a global (rather than a national or a regional) perspective. Earth, on the other hand, refers to the planet as a physical entity, and distinguishes it from other planets and physical objects.

"World" was also classically used to mean the material universe, or the cosmos: "The worlde is an apte frame of heauen and earthe, and all other naturall thinges contained in them."[4] The earth was often described as "the center of the world".[5]

The term can also be used attributively, to mean "global", or "relating to the whole world", forming usages such as world community or world canonical texts.[6]

By extension, a world may refer to any planet or heavenly body, especially when it is thought of as inhabited, especially in the context of science fiction or futurology.

World, in its original sense, when qualified, can also refer to a particular domain of human experience. 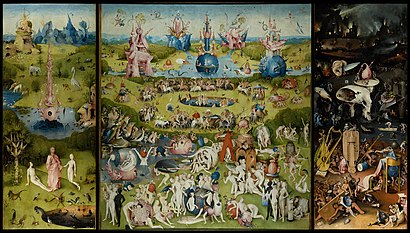 The Garden of Earthly Delights triptych by Hieronymus Bosch (c. 1503) shows the "garden" of mundane pleasures flanked by Paradise and Hell. The exterior panel shows the world before the appearance of humanity, depicted as a disc enclosed in a sphere.

In philosophy, the term world has several possible meanings. In some contexts, it refers to everything that makes up reality or the physical universe. In others, it can mean have a specific ontological sense (see world disclosure). While clarifying the concept of world has arguably always been among the basic tasks of Western philosophy, this theme appears to have been raised explicitly only at the start of the twentieth century[7] and has been the subject of continuous debate. The question of what the world is has by no means been settled.

In his Allegory of the Cave, Plato distinguishes between forms and ideas and imagines two distinct worlds: the sensible world and the intelligible world.

In Georg Wilhelm Friedrich Hegel's philosophy of history, the expression Weltgeschichte ist Weltgericht (World History is a tribunal that judges the World) is used to assert the view that History is what judges men, their actions and their opinions. Science is born from the desire to transform the World in relation to Man; its final end is technical application.

Two definitions that were both put forward in the 1920s, however, suggest the range of available opinion. "The world is everything that is the case," wrote Ludwig Wittgenstein in his influential Tractatus Logico-Philosophicus, first published in 1921.[8] This definition would serve as the basis of logical positivism, with its assumption that there is exactly one world, consisting of the totality of facts, regardless of the interpretations that individual people may make of them.

Martin Heidegger, meanwhile, argued that "the surrounding world is different for each of us, and notwithstanding that we move about in a common world".[9] The world, for Heidegger, was that into which we are always already "thrown" and with which we, as beings-in-the-world, must come to terms. His conception of "world disclosure" was most notably elaborated in his 1927 work Being and Time.

In response, Sigmund Freud proposed that we do not move about in a common world, but a common thought process. He believed that all the actions of a person are motivated by one thing: lust. This led to numerous theories about reactionary consciousness.

Some philosophers, often inspired by David Lewis, argue that metaphysical concepts such as possibility, probability, and necessity are best analyzed by comparing the world to a range of possible worlds; a view commonly known as modal realism. 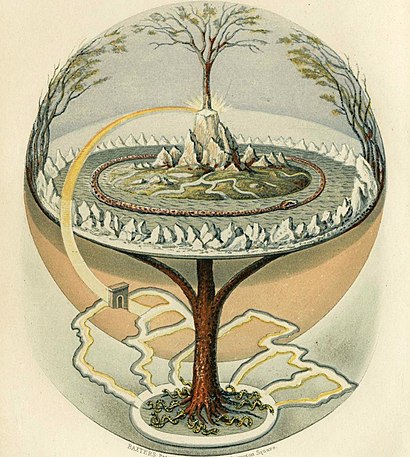 Yggdrasil, a modern attempt to reconstruct the Norse world tree which connects the heavens, the world, and the underworld.

Mythological cosmologies often depict the world as centered on an axis mundi and delimited by a boundary such as a world ocean, a world serpent or similar. In some religions, worldliness (also called carnality)[10][11] is that which relates to this world as opposed to other worlds or realms.

In Buddhism, the world means society, as distinct from the monastery. It refers to the material world, and to worldly gain such as wealth, reputation, jobs, and war. The spiritual world would be the path to enlightenment, and changes would be sought in what we could call the psychological realm.

In Christianity, the term often connotes the concept of the fallen and corrupt world order of human society, in contrast to the World to Come. The world is frequently cited alongside the flesh and the Devil as a source of temptation that Christians should flee. Monks speak of striving to be "in this world, but not of this world"—as Jesus said—and the term "worldhood" has been distinguished from "monkhood", the former being the status of merchants, princes, and others who deal with "worldly" things.

This view is clearly expressed by king Alfred the Great of England (d. 899) in his famous Preface to the Cura Pastoralis:

"Therefore I command you to do as I believe you are willing to do, that you free yourself from worldly affairs (Old English: woruldðinga) as often as you can, so that wherever you can establish that wisdom that God gave you, you establish it. Consider what punishments befell us in this world when we neither loved wisdom at all ourselves, nor transmitted it to other men; we had the name alone that we were Christians, and very few had the practices."

Contemptus mundi is the name given to the belief that the world, in all its vanity, is nothing more than a futile attempt to hide from God by stifling our desire for the good and the holy.[12] This view has been criticized as a "pastoral of fear" by modern historian Jean Delumeau.[13]

During the Second Vatican Council, there was a novel attempt to develop a positive theological view of the World, which is illustrated by the pastoral optimism of the constitutions Gaudium et spes, Lumen gentium, Unitatis redintegratio and Dignitatis humanae.

In Eastern Christian monasticism or asceticism, the world of mankind is driven by passions. Therefore, the passions of the World are simply called "the world". Each of these passions are a link to the world of mankind or order of human society. Each of these passions must be overcome in order for a person to receive salvation (theosis). The process of theosis is a personal relationship with God. This understanding is taught within the works of ascetics like Evagrius Ponticus, and the most seminal ascetic works read most widely by Eastern Christians, the Philokalia and the Ladder of Divine Ascent (the works of Evagrius and John Climacus are also contained within the Philokalia). At the highest level of world transcendence is hesychasm which culminates into the Vision of God.

Orbis Catholicus is a Latin phrase meaning Catholic world, per the expression Urbi et Orbi, and refers to that area of Christendom under papal supremacy. It is somewhat similar to the phrases secular world, Jewish world and Islamic world.

Dunya derives from the root word "dana" that means to bring near. In that sense, "dunya" is "what is brought near".[14][page needed]

Hinduism is an Indian religion and dharma, or a way of life, widely practised in the Indian subcontinent. It includes a number of Indian religious traditions with a loose sense of interconnection, as different from Jainism and Buddhism, and (since medieval and modern times) Islam and Christianity. Hinduism has been called the oldest religion in the world.[note 1]

Others articles of the Topics Environment AND Geography : List of federal lands in Colorado

Share
Retrieved from "https://en.everybodywiki.com/index.php?title=World&oldid=990663"
Categories:
Hidden categories:
This page was last edited on 29 August 2020, at 23:42.
Content is available under License CC BY-SA 3.0 unless otherwise noted.
This page has been accessed 1,022 times.
Privacy policy
About EverybodyWiki Bios & Wiki
Disclaimers