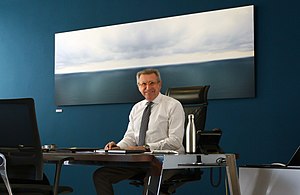 Piatti was involved in the automotive field since his university years. At that time, he worked at Auto & Design magazine and La Stampa as a contributing editor, and he wrote several books.[citation needed]

After obtaining a master's degree in mechanical engineering at Politecnico di Torino, Piatti joined I.DE.A. Institute as a project leader in the automotive field, creating relations with emerging countries such as China, India, and South America.[citation needed]

In 1996, Piatti moved to Stile Bertone,[1] where he stayed for ten years, becoming General Director in 1998.[2] He managed the company's expansion, improving its range of services, and oversaw innovative projects born in that period such as the Opel Filo (2001), the Saab Novanta (2002) with drive-by-wire technology, and the Cadillac Villa (2005).[citation needed]

Due to his passion for sailing, Piatti moved the knowledge he obtained in the automotive field to nautical[3] and aeronautical pursuits.

In March 2006, he founded Torino Design, a new car design center, of which he is the owner and managing director. He put together a pool of designers[4], engineers, managers, and model developers highly skilled in automotive and industrial design.

Share
Retrieved from "https://en.everybodywiki.com/index.php?title=Roberto_Piatti&oldid=2217927"
Categories:
Hidden categories:
This page was last edited on 31 December 2021, at 16:41.
Content is available under License CC BY-SA 3.0 unless otherwise noted.
This page has been accessed 327 times.
Privacy policy
About EverybodyWiki Bios & Wiki
Disclaimers