The Royal Chapel of Milot is a religious establishment located in the Sans Souci Palace in Haiti. 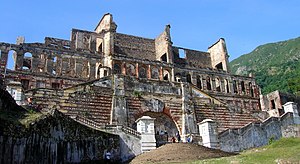 The Royal Chapel of Milot was built by King Henri Christophe and he had Our Lady of the Immaculate Conception built by Joseph Chery Warlock. The first construction took place from (1810-1813) and it is located at the entry to the Sans-Souci Palace, in the town of Milot, Nord, about 5 kilometers (3.1 mi) northeast of the Citadelle Laferrière, and 13 kilometers (8.1 mi) southwest of the Three Bays Protected Area. 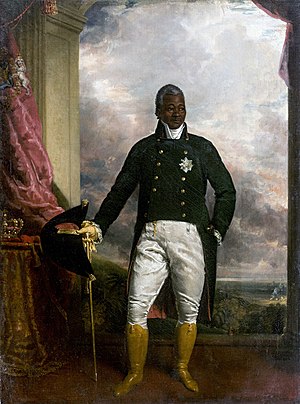 The Haitian monument Sans-Souci Palace was the royal residence of the King. Henri I lived there with his wife, Queen Marie-Louise Coidavid, and their two daughters. From today point of view, it was the most important structure the king had built (including nine other palaces, fifteen castles, numerous forts, and sprawling summer homes on his twenty plantations..[1]

And before Sans-Souci was built, Milot used to be a French plantation that Christophe managed for a period of time during the Haitian Revolution.[2] Under his administration, the palace was the site of opulent feasts and dances. It had beautiful arts, immense gardens, artificial springs, and a system of waterworks. Though Sans-Souci is now an empty place, at the time its splendor was noted by many foreign visitors. One American physician even remarked that it had "the reputation of having been one of the most magnificent edifices of the West Indies."[3]

In Haiti, the Citadelle Laferrière is located in the northern department of Haiti and the palace is also surrounded by large mountains and the surrounding area is very rich in trees. The oldest palace is now a tourist attraction visited by people from around the world.

Back then, A wicked earthquake in 1842 destroyed a considerable part of the palace and devastated the nearby city of Cap-Haïtien; the palace was never rebuilt since then. The dome of the chapel, which collapsed during the earthquake, was rebuilt in 1970 by Haitian architect Albert Mangonès. The palace (before its destruction) was acknowledged by many to be the Caribbean equivalent of the Palace of Versailles in France.

In today's society, Haiti has used the palace as monuments valued by Haitian citizens to welcome visitors from all over the world[4].

The Royal Chapel of Milot was built by Henri Christophe at the time he had full control of the land during his terms. King Henri was a top general in the Haitian army and the chief administrator of the country's northern regions[5]. The Chapel was constructed by more than 20,000 ex-slaves, was built several kilometers inland atop the 900 meters (3,000 ft) Bonnet a L’Eveque mountain, as a means of providing the optimal military vantage point[6]. The Chapel was eventually abandoned when it was struck by numerous earthquakes and a French attack never came[7]. Unfortunately, there was an invasion at the palace when King Henri suffered a stroke, but to prevent him from getting killed by invaded enemies, he committed suicide[8].

The Royal Chapel of Milot is now a Haitian monument located in Milot, at the same location. The monument is now a destination for visitors[9].

On April 12, 2020, at 3 a.m. Eastern Daylight Time, a fire destroyed the dome and the interior of the chapel, leaving no deaths and injuries[10].

According to Bishop Alain Prophète and director Patrick Durandis[11], the art objects and religious relics that were inside the building were destroyed by fire, but there is a small percentage of objects that were near the door which survived but suffered smoke damage. Even some exterior elements were damaged because the fire was strong[12]. According to government officials in Haiti, it will take some time to build the Royal Chapel of Milot as before under the leadership of King Henri Christophe, but Unesco has offered to help[13].

According to Jacques Bernadin, the mayor of Milot, the firefighters from the Cap-Haitien town hall arrived on the scene two hours after being alerted, but it was too late[15].

At around 3 a.m., residents near the place and Werley Nortreus noticed a large smoke in the air which prevented people near and far from the chapel from breathing until they saw it was the Chapel that was under fire[16]. The Haitian leader Werley Nortreus was one of the leaders who demanded answers after the fire destroyed the Church[17].

After the fire destroyed the monument church, Bishop Alain Prophète, director Patrick Durandis, political leader Werley Nortreus[18], the residents of Milot and other leaders across Haiti responded and young people also demanded an investigation right away[19].

A few days later, after the fire destroyed the building, the Ministry of Tourism, Haitian President Jovenel Moïse, and Prime Minister Joseph Jouthe asked Milot leaders to investigate the cause of the fire[22]

The investigation is continuing as Haiti has opened an investigation into the case[23]. But, According to authorities in Milot, the cause of the fire is unknown and the fire may have been caused by lightning.

Retrieved from "https://en.everybodywiki.com/index.php?title=Royal_Chapel_of_Milot_(Haiti)&oldid=1034587"
Categories:
Hidden categories:
This page was last edited on 8 October 2020, at 03:05.
This page has been accessed 461 times.
Content is available under License CC BY-SA 3.0 unless otherwise noted.
Privacy policy
About EverybodyWiki Bios & Wiki
Disclaimers