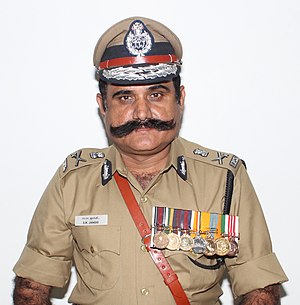 S. R. Jangid is a police officer and former DGP in Tamil Nadu, India. He was famous for his actions and bravery in the Operation Bawaria. He was awarded police medal by the President for his efforts in the case.[1]

S R Jangid was born in a village Bandra (PO: Kavas), Barmer District [1] in Rajasthan state on 01.08.1959. His parents were agriculturists. He did his early schooling in a Government run middle school at Kavas. Thereafter, he studied at Barmer and he did his Master degree in Economics at the University of Rajasthan, Jaipur in 1982. Soon he was appointed as Assistant Professor and he worked at this post for two years (1983-85) at Govt PG College, Sri Ganganagar and Govt PG College, Jalore.

S R Jangid was selected to the Indian Police Service by the UPSC in 1985. He underwent Foundation Course at the Lal Bahadur Shastri National Academy of Administration, Mussoorie. During this training, he was awarded the Gold Medal and the Army Trophy by the then Chief of the Army Staff, General K Sunderji  in the triple competition viz Essay, Group discussion and Elocution. His essay “Aid to civil authorities” was published in National Military magazines. He was allotted to Tamil Nadu state cadre where he joined in 1986. He underwent practical training in Thoothookudi (also known as Tuticorin) district. On completion of this training, he was posted as Assistant Superintendent of Police (ASP), Ambasamuthiram in Tirunelveli district wherein he worked for two years (1988-1989). He worked as Superintendent of Police of Nilgiris, Cuddalore, Tirunelveli and Thoothukudi (Tuticorin) Districts. He worked as Deputy Inspector General of Police in 1999 in Madurai, Tirunelveli, Chengalput and Thanjavur Ranges.[2] He served as the Commissioner of Police of Madurai City and Tirunelveli City. He joined as the first Commissioner of Police of the newly formed Chennai Suburban Commissionerate in July 2008 and continued for two and half years. Presently, he is working as Director General of Police, and CVO, Metropolitan Transport Corporation.

On promotion as Deputy Inspector General of Police, Jangid was posted to head Madurai Range in February, 1999.  Subsequently  he held dual charge as  Commissioner of Police, Madurai City and  Deputy Inspector General of Police, Madurai Range  also in the year 2000-01. In order to prevent crimes and bootlegging and also to fill the gap between police and public, Mr Jangid came up with the following initiatives with different objectives and a well laid out plan of execution:

Jangid was instrumental in carrying out various administrative reforms in the City. Subsequently, the Greater Chennai City was bifurcated. In July 2008, another Commissionerate, namely Chennai Suburban Commissionerate, was carved out, which included outer and Suburban areas of Chennai City to provide better policing to the people of these neglected areas.

Jangid assumed  charge as the first Commissioner of the newly created Commissionerate on July, 23, 2008 and brought out various changes in the system of policing. These were:

The operation was launched in January 2005 soon after the murder of AIADMK Gummidipoondi MLA Sudarsanam when armed dacoits struck affluent houses surrounding the National Highway in Tamil Nadu, Karnataka and Andhra Pradesh.

Bawaria was the prime suspect in dacoities in which many prominent figures including Salem district Congress committee president Thalamuthu Natarajan and Dravida Munnetra Kazhagam functionary Gajendran, were killed. In Sriperumbudur, they killed a schoolgirl and injured her parents grievously while committing a dacoity. Bawaria was wanted by the police in nine States for his involvement in about 200 major dacoity cases. One of his recent operations was at Gummidipoondi where AIADMK MLA Sudarsanam, was shot dead and his house looted.The operation against the Bawaria criminals was launched in January 2005 soon after the murder of Sudarsanam. When armed dacoits struck affluent houses along National Highways in Tamil Nadu, Karnataka and Andhra Pradesh, Chief Minister of Tamilnadu, Jayalalithaa ordered intensive action against the culprits. Director General of Police S. R. Jangid along with ADGP Sanjay Arora led a team to investigate.

The team started investigating. They soon realized that the fingerprints and style of killings matched. They speculated the murders were carried out by a single team in different parts of India. The team coordinated with the Uttar Pradesh Police and central intelligence agencies.[3] The team raided a house in Kannauj in the early hours. With reinforcement from the U.P. Special Task Force, they nabbed Bawaria and his wife Beena Devi as they were preparing for a major dacoity nearby.[4] Though the accused resisted, the police overpowered the couple and took them into custody.Beginning in January 2005, the team nabbed ten Bawaria gang members in various parts of the country along with four trucks used by them.[4] Over the course of the next eight years, the team hunted down the criminals and finally they found the remaining gang members in Rajasthan. The important culprits Oma Bawaria and Ashok Bawaria were executed in the order of the court.[3]

Jangid has encountered some notorious criminals. Some of them are:

Retrieved from "https://en.everybodywiki.com/index.php?title=S._R._Jangid&oldid=1459167"
Categories:
Hidden categories:
This page was last edited on 14 March 2021, at 07:14.
This page has been accessed 12,203 times.
Content is available under License CC BY-SA 3.0 unless otherwise noted.
Privacy policy
About EverybodyWiki Bios & Wiki
Disclaimers
Mobile view