Savitri Ganesan (born Nissankara Sarasavanidevi) was an Indian film actress, playback singer, dancer, director and producer known for her works primarily in Telugu cinema and Tamil cinema. She is also known for her works in Kannada, Malayalam, and Hindi films.

Savitri received "A Moon Among Stars" honor at the 30th International Film Festival of India, "Woman in Cinema" section in 1999.[7] The 2018 biographical film Mahanati based on the life of Savitri has garnered the "Equality in Cinema Award" at the 2018 Indian Film Festival of Melbourne.[8]

Savitri was born on 6 December 1936[citation needed] into a Telugu speaking family in Chirravuru, Guntur district, Madras Presidency,[citation needed] now a part of Andhra Pradesh. Her father was Nissankara Guruvaiya and mother was Nissankara Subhadramma.[9][10] Her father died when she was six months old, after which her mother took Savitri and an older sibling, Maruti, to live with an aunt and uncle. Her uncle, Kommareddy Venkataramaiah Chowdary, enrolled her in classes when she began to show a talent for dance.[1]

Savitri married Tamil actor Gemini Ganesan in 1952, having first met him in 1948. The marriage led to a permanent rift with her uncle because Ganesan was already married, had four daughters and was involved in an affair with Pushpavalli.[1] Her marriage became public when she signed a photograph as Savitri Ganesh.[11] Ganesan later acknowledged that he had two daughters with Pushpavalli while married to Savitri, with whom he had a daughter and a son.[1] 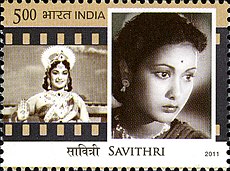 Savitri acted in dance dramas as a child, including some work with a theatre company run by Kongara Jaggaiah. She made an unsuccessful speculative trip to find film work in Madras at the age of 12, when she was deemed to be too young to play heroine roles, but in 1950 was cast as the female lead in Samsaram. That role did not become actuality because she became too excited, necessitating numerous retakes and eventually her replacement in the part. She was given a minor speaking role in the film and in the next year had two more minor roles, in Roopavati and Patala Bhairavi, before getting her big break as second heroine in Pelli Chesi Choodu.[1]

Savriti was known for her hospitality, philanthropic gestures, and her love of buying property and jewellery, but she kept little control of her spending. Ganesan continued to philander and she was susceptible to favouring hangers-on with her largesse. Her career took a downturn in the late 1960s. Her properties were seized by tax officials and she turned to acting in any film that would have her, while sycophants encouraged her to direct and produce films that were unsuccessful and financially draining. Among her few supporters during her financial difficulties was Dasari Narayana Rao, who used her in most of his films, such as Gorintaku (1979), and specifically made Devadasu Malli Puttadu (1978) as a movie for her.[1] Her only Malayalam film was Chuzhi (1973).[12]

Savitri died on 26 December 1981, at the age of 45, after being in a coma for 19 months. She had developed diabetes and high blood pressure.[1][13] The Government of India issued a postage stamp in commemoration of Savitri.[14]

Share
Retrieved from "https://en.everybodywiki.com/index.php?title=Savitri_(actress)&oldid=820130"
Categories:
Hidden categories:
This page was last edited on 19 June 2020, at 15:42.
Content is available under License CC BY-SA 3.0 unless otherwise noted.
This page has been accessed 896 times.
Privacy policy
About EverybodyWiki Bios & Wiki
Disclaimers