Savitribai Phule Pune University (SPPU), formerly University of Pune and University of Poona, is a collegiate public state university located in Pune, Maharashtra. Established in 1949, and spread over a 411 acres (1.66 km2) campus,[3] the university is home to 43 academic departments. The university is named after Savitribai Phule, a 19th-century Indian social reformer who is known for her contribution towards empowerment and emancipation of women through education. The university has affiliated colleges, departments, and research institutes, which are primarily in Pune, Ahmednagar and Nashik Districts.

In 2018, the University of Pune was ranked 7th among universities in India by the Times Higher Education.[4]

University of Pune was established on 10 February 1949 under the Pune University Act, passed by the Bombay legislature in 1948.[5] M. R. Jayakar became its first Vice-Chancellor. Its first office was started from the Nizam Guest House, which is part of Bhandarkar Oriental Research Institute on Law College Road. The university was operated at Nizam Guest House till 1 June 1949. Its current building originally called the Governor House. As its name suggests, it was the seasonal retreat of the Governor of Bombay.[6]

B. G. Kher, Chief Minister and Education Minister of the government of Bombay, helped ensure the university received a large allocation of land for their campus. The university was allocated over 411 acres (1.66 km2).[5]

Its location has historical significance. Some incidents of the Battle of Khirkee, during the Third Anglo-Maratha War, took place where the university is located.[citation needed]

The institution's name was changed from the University of Pune to Savitribai Phule Pune University on 9 August 2014 in honor of Savitribai Phule, the 19th century Indian social reformer who played an important role in improving the lives of women and the Dalit communities in Maharashtra during British colonial rule. She and her husband Mahatma Jyotirao Phule founded India's first native-run school for girls in 1848.[7]

Initially the university had a jurisdiction extending over 12 districts of western Maharashtra. With the establishment of Shivaji University in Kolhapur in 1962, the jurisdiction was restricted to five districts: Pune, Ahmednagar, Nashik, Dhule and Jalgaon. Out of these, two districts—Dhule and Jalgaon—are attached to the North Maharashtra University in Jalgaon established in August 1990.[5]

Past and present vice-chancellors of the university are:[8] 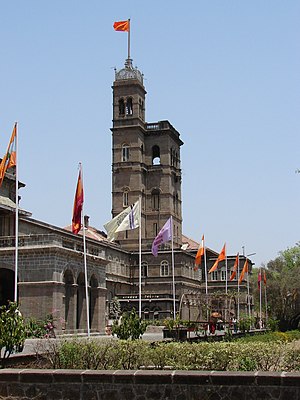 The library was founded in 1950 and is a center of reference and information. It subscribes to Indian and foreign research journals, and receives periodicals on a gratis and exchange basis. It has more than 450,000 books and journals. An inter-library loan facility is extended to colleges, institutions and government agencies. The Jayakar Library has preserved ancient Indian texts in the form of manuscripts and books. It has computerized all library activities and using RFID technology and has undertaken a project in digital library management.

It was ranked 19 in India overall by the National Institutional Ranking Framework in 2020[20] and 9th among universities.[21]

In the Khelo India University Games in Odisha, Savitribai Phule Pune University was on top with 29 medals including fifteen gold, eight silver and six bronze medals on the fifth day on 26 February 2020.[22]

Savitribai Phule Pune University's Joyita Sarkar was one of the 21 people and the only one from an educational institute in the state to be awarded by President Ramnath Kovind for her role in science communication and popularisation on the National Science Day in New Delhi.[23]

More than 70 research institutions have been recognised by the Savitribai Phule Pune University for research. These include institutions of national importance like the Inter-University Centre for Astronomy and Astrophysics (IUCAA), Indian Institute of Tropical Meteorology(IITM), National Chemical Laboratory (NCL), National Centre For Cell Science (NCCS), National Institute of Virology (NIV), Gokhale Institute of Politics and Economics (GIPE), Documentation Research and Training Centre (DRTC) of the Indian Statistical Institute (ISI), Centre for Materials for Electronics Technology (C-MET) among others.

Other research organisations which are associated with the university are:

Khaled Bahah, 2nd Vice President of Yemen and Prime Minister of Yemen, received his BCom and MCom from the university.[26]

In science and engineering, notable alumni of the university include Padmanabhan Balaram, chemist and director of the Indian Institute of Science; Kantilal Mardia, statistician and Guy Medallists; Thomas Kailath, electrical engineer and recipient of the 2014 National Medal of Science; Vistasp Karbhari, civil engineer and the eighth president of the University of Texas at Arlington;[27] Suhas Patankar, professor at the University of Minnesota, and pioneer in the field of computational fluid dynamics (CFD) and finite volume method; C. Kumar N. Patel, inventor of the carbon dioxide laser, recipient of the 1996 National Medal of Science and vice-Chancellor for Research at the University of California, Los Angeles;[28] and Vinod Scaria, bioinformatician, who is known for sequencing the first Indian genome. V. S. Huzurbazar served as the first head of the statistics department. S.N. Sadasivan who was Civil Services trainer, Author and historian.

Share
Retrieved from "https://en.everybodywiki.com/index.php?title=Savitribai_Phule_Pune_University&oldid=1734246"
Categories:
Hidden categories:
This page was last edited on 21 May 2021, at 04:52.
Content is available under License CC BY-SA 3.0 unless otherwise noted.
This page has been accessed 502 times.
Privacy policy
About EverybodyWiki Bios & Wiki
Disclaimers