Screenfetch is a Bash script available for Linux[2] that displays system information alongside the ASCII version of the Linux distribution Logo of the system. As described in its manual page it is mostly used to generate screenshots to share on social media or image hosting websites. The software supports many GNU and Linux distributions such as Arch Linux, Fedora, Ubuntu and Slackware, and also some of the BSD distributions as well. Apart from displaying data about operating system, it also shows information about the system's desktop manager and window manager, supporting most of the major desktop and window managers such as GNOME, KDE, XMonad, and i3. 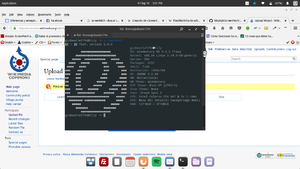 Retrieved from "https://en.everybodywiki.com/index.php?title=Screenfetch&oldid=503323"
Categories:
Hidden categories:
This page was last edited on 23 July 2019, at 04:45.
This page has been accessed 327 times.
Content is available under License CC BY-SA 3.0 unless otherwise noted.
Privacy policy
About EverybodyWiki Bios & Wiki
Disclaimers