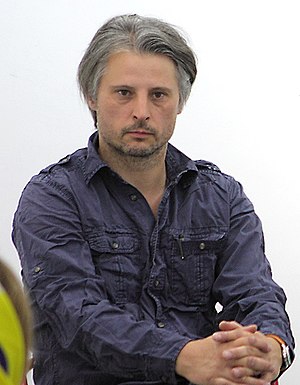 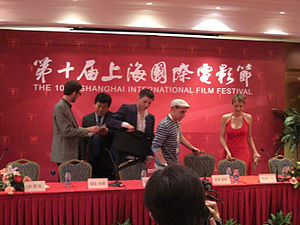 Sebastian Bieniek, 2007, during a press conference at the 10th Shanghai International Film Festival.

Bieniek was born in Czarnowąsy, Upper Silesia/Poland, and until the age of 14 he grew up in the Upper Silesian village of Kup. In 1989 he left Poland as a late repatriate.[citation needed]

In 2001 he got a grand (residency) of the DFJW in Rennes/France where he spent a half year and took part in a group exhibition called "Aux voyageurs",[2] curated by Bettina Klein. In the same year he graduated at the UdK Berlin.

In 2002 he started to study movie directing at the DFFB Berlin, where he made several movies. His 2007 made full-length movie "The Gamblers" was part of the official competition of the 10th Shanghai International Film Festival.[3] His 2008 made movie "Silvester Home Run"[4] was part of the international short-film competition of the Festival Internacional de Cine de Mar del Plata[5] and also shown at the Montreal World Film Festival.

2012 he made a performance the Art Market Budapest Art Fair, 2013 at the Deutsche Bank KunstHalle and 2016 at the University Church Marburg[6].

.), in which he analyzed group formation and behavior in the social media and supplemented it by his own experiences, experimental arrangements and thoughts.

In 2013 Bieniek collaborated with the German INTRO music magazine for a photo shoot.[7] In 2015 he made a photo shoot for the Süddeutsche Zeitung Magazine.[8] In 2015 he collaborated with the French fashion designer Simon Porte Jacquemus at the Paris Fashion Week.[9] In 2016 he cooperated with the "Institute for church building and contemporary art" at the University of Marburg when being a part of the Liturgy Specific Art art-performance serial.[10] In 2016 he also cooperated with the director and Head Curator of the MONA Museum (Australia), Olivier Varenne for his online exhibition project at collectionair.com.[11]

In 2017-2018 the Italian dancers Federica Aloisio and Sabrina Vicari created a dance-show called EIOKA inspired by Bieniek's artwork which was shown across Italy and became the winner of the Premio Strabismi 2017[16].

In 2015–2016 fashion designers Simon Porte Jaquemus, Cecilia Devana and Inês Marques said that their work drew some of its inspiration from Bieniek's work.[17][18][19]

In 2014 several publications wrote that a scene in the "Marilyn Monroe" video of Pharrell Williams is inspired by Bieniek's artwork.[20][21][22]

Retrieved from "https://en.everybodywiki.com/index.php?title=Sebastian_Bieniek&oldid=958643"
Categories:
Hidden categories:
This page was last edited on 16 August 2020, at 14:12.
This page has been accessed 136 times.
Content is available under License CC BY-SA 3.0 unless otherwise noted.
Privacy policy
About EverybodyWiki Bios & Wiki
Disclaimers
Mobile view