The service record of Reinhard Heydrich was a collection of official SS documents maintained at the SS Personnel Main Office in Berlin from 1934 until the fall of Nazi Germany in 1945. Most of Reinhard Heydrich's record was captured by the Allies and used for subsequent investigation into Heydrich's duties as head of the RSHA and overall performance in the SS in general.

Today, Reinhard Heydrich's original paper service record is maintained at the German Federal Archives. A microfilm copy of the record is also available at the National Archives and Records Administration in College Park, Maryland.

Heydrich began his military career in 1922, joining the Reichsmarine as a midshipman (Seekadet). He was promoted to senior midshipman (Oberfähnrich zur See) on 1 April 1924 and commissioned an ensign (Leutnant zur See) in 1926. Serving as a signals officer, in 1928 he was promoted to sub-lieutenant (Oberleutnant zur See). However, the promotion further fuelled his arrogance and ambition, resulting in difficult relations with his fellow officers and sailors. Gaining a reputation as a womaniser, in April 1931 he was court-martialled and dismissed from the Navy for "conduct unbecoming to an officer and a gentleman." [1]

File:HeydrichAppoint.jpg
Commissioning order for Reinhard Heydrich to assume duties as an SS-officer
File:HeydrichSDAppoint.jpg
Heydrich's formal appointment as Chief of the Sicherheitsdienst

When Heydrich joined the SS, it was with the understanding that he would be a primary assistant to Heinrich Himmler and also Himmler's "right hand man" when it came to SS activities in southern Germany. The SS in 1931 was divided by shifting loyalties and geographical divisions, with two SS power bases building up in northern and southern Germany respectively. Two years before the Nazis were in power, this stage of the SS did not encompass the state police forces that Heydrich would eventually be put in command of by Himmler, and his task in 1931 was to develop an internal security group and help Heinrich Himmler to gain more power within the Nazi Party and the SS.

Heydrich was enlisted into the SS in the summer of 1931. After three weeks, Heydrich was given a commission as an SS-Sturmführer and began working out of a Munich apartment to establish his Ic-Dienst which would later become the Sicherheitsdienst (SD). By Christmas, Heydrich was an SS-captain which, at that time, was known as Sturmhauptführer (prior to 1934, SS officer ranks were the same as the SA. This rank would eventually become Hauptsturmführer). Just two weeks later, Heydrich was made an SS-major as he continued to build his security service. Six months later, in the summer of 1932, he became an SS-colonel (Standartenführer) as the SS at this point had no lieutenant colonel rank. An important irony of Heydrich's standing at this point in his career is that senior SS leaders considered him rather unimportant and he was referred to by one SS Group Leader in northern Germany as a "mere" Standartenführer.

The event which catapulted Heydrich into the ranks of the SS Generals was the Nazi Party's assumption to power in January 1933. Two months later, in March, Heydrich was promoted to Oberführer and it is in this capacity that the first official photographs of him were taken. Some private photographs exist showing him as an Standartenführer from 1932, but there are no known pictures of Heydrich wearing a junior SS rank from before this time.

The year of 1933 was occupied by Heydrich and Himmler attempting to consolidate SS power and eliminate the divisions which had developed between regional SS leaders. The effort was begun to take over control of the state police forces and also to transfer SS headquarters from Munich to Berlin. Thus, by the end of 1933, Heydrich had been promoted to Brigadeführer, basically the equivalent of a major general and had moved his office to Berlin from where he commanded the SD. On 20 April 1934, Göring and Himmler agreed to put aside their differences (largely because of their mutual hatred and growing dread of the Sturmabteilung; SA). Göring transferred full authority over the Gestapo to Himmler, who was also named chief of all German police forces outside of Prussia. Himmler on 22 April 1934 named Heydrich the head of the Gestapo.[2] With the Gestapo under their control, the two men plotted as to its use along with the SS to crush the SA.

The Night of the Long Knives (30 June to 2 July 1934) was another event which significantly helped Heydrich's career as his SD apparatus (along with other branches of the SS, such as the Totenkopfverbande) and the Gestapo were used to destroy the leadership of the SA. This established the SS as the dominant paramilitary group within the Nazi Party. For Heydrich's role, he was made an SS-Gruppenführer which was the second highest rank at the time. However, at this stage in his career, Heydrich was still mainly regarded as the commander of the SD but had already begun to exert himself into other police forces including the Gestapo.

For the next five years, Heydrich became feared throughout Germany. Himmler, after being named the chief of all German police in 1936, incorporated together the Gestapo and the Kripo or Kriminalpolizei (Criminal Police) into sub-departments of the Sicherheitspolizei or SiPo (Security Police).[3] They were considered a complementary organisation to the Sicherheitsdienst (SD). Reinhard Heydrich was given control of the SiPo (Gestapo & Kripo) and remained head of the SD.[4] Although Heydrich was chief of the Gestapo, Heinrich Müller ran this unit's day-to-day operations.[5] Simultaneously during this time, Heydrich had begun to focus on anti-Jewish measures throughout Germany and he was tasked with overseeing security at the 1936 Summer Olympics.

The start of the Second World War propelled Heydrich to even further power as his Sicherheitspolizei (SiPo) and his SD were merged into the Reichssicherheitshauptamt over which he was given command. The RSHA was further tasked to create and manage the Einsatzgruppen sent into Poland (and later Soviet Union) to round up and exterminate Jews, Communists, and other "undesirables".[6]

In September 1941, Heydrich was given his first political posting as he became the Deputy Reichsprotector of Protectorate of Bohemia and Moravia. Promoted to Obergruppenführer (a full SS-General), just a few months later Heydrich was tasked by Göring to chair the Wannsee Conference at which he presented to heads of a number of German Government departments a plan for the deportation and transporting of Jewish people from every country in Europe to be worked to death or outright killed in the East.[7]

Heydrich's position in the spring of 1942 was one of great power, but his career was cut short. In May, Heydrich was attacked by British Special Operations Executive (SOE) trained soldiers of the Czechoslovakia’s army-in-exile, Jozef Gabčík and Jan Kubiš in Prague. Heydrich died in early June 1942 of his wounds.[8] 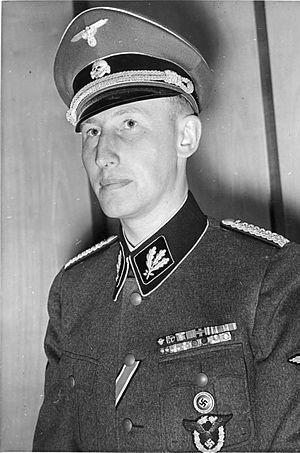 Reinhard Heydrich served as Reserve Hauptmann, then major in the Luftwaffe. He served in the Invasion of Poland as a turret gunner.[9] Then, despite his age, he completed a fighter pilot course in 1940. Heydrich wanted to set an example and show that the SS were not "asphalt" soldiers behind the front lines, but the elite of the Third Reich. In April 1940 he flew a Bf 110 in the Fighter Group II./JG 77 "Herz As"[10] in Norway. The planes flown by Heydrich had an ancient Germanic runic character S for Sieg -- "victory" painted on the side of the fuselage. On May 13, 1940 his plane crashed during take-off and Heydrich was injured. For a short time in May, he flew patrol flights over North Germany and the Netherlands. Then, after another accident, he returned to Berlin. In mid-June 1941, before the German attack on the USSR, he resumed flying, ignoring Himmler's orders. He flew his personal Bf 109 again with Group II./JG 77 from Bălţi, Romania on the southern Eastern Front, which put the wing commander under pressure due to Heydrich's position and lack of experience. On 22 July 1941, while on a combat mission, his plane was badly damaged over Yampil by Soviet anti-aircraft fire. Heydrich made an emergency landing in no-man's land, evaded a Soviet patrol and made his way back to German lines.[11] After this, Hitler forbade him to fly in combat, as it was realized that his capture as a POW would be a major security breach for Germany. He never flew another operational sortie.

Heydrich was decorated with the Iron Cross Second (1940) and First (1941) Classes. The number of missions he flew is not known, but he was awarded the Frontflugspange (Front Pilot Badge) in silver, which usually was awarded after 60 combat missions. According to Ballantine Books' Illustrated History of the Violent Century (1973), Heydrich flew 97 missions in a Bf-110 twin engine fighter.

Documents recovered from Heinrich Himmler's personal journals, as well as draft orders from the SS-Hauptamt, indicate that in early 1942 Heydrich was under consideration for appointment as the Military Governor of France, in an effort to supplant the army control of that posting which was by 1942 already heavily suspected of involvement in anti-Hitler conspiracies (Carl-Heinrich von Stülpnagel, who held the position of Military Governor, was later executed for participation in the 20 July Plot). Both Himmler and Hitler further had plans to create a supreme security posting, possibly known as "Commander Security Forces Europe" (Oberbefelshaber des Sicherheitsdienstleistung Europa) for which Heydrich was the natural candidate. Had Heydrich lived, he almost certainly would have been granted Waffen-SS general rank in 1944; however, a promotion to SS-Oberst-Gruppenführer and assumption to the position of Colonel General of Police is debatable, given that no other SS security officer was promoted to SS-Colonel General during the Second World War (Kurt Daluege was the only police officer to hold this position).[12] Heydrich was also known to have stated that he had no desire to become the Reichsführer-SS, leaving the question open as to who would have succeeded Himmler had the SS Chief been killed or relieved of his position during the course of the Second World War (Hitler appointed Karl Hanke to the position in the last days of World War II).[13]

File:HeydrichPromote.jpg
The promotion order of Heydrich to the rank of Obergruppenführer, signed by Adolf Hitler.

Cashiered and dismissed from the service for conduct unbecoming an officer in April 1931.[14][15]

Within the dramatic portrayals of Reinhard Heydrich, Heydrich has been shown wearing additional awards and decorations, including the "Adolf Hitler" cuffband of the Leibstandarte Adolf Hiter, for which Heydrich was never actually a member. A fictional portrayal of Reinhard Heydrich is also seen in the TV series The Man in the High Castle wearing additional awards and medals, among them the Knight's Cross of the War Merit Cross, as well as having been promoted to SS-Oberst-Gruppenführer.

Retrieved from "https://en.everybodywiki.com/index.php?title=Service_record_of_Reinhard_Heydrich&oldid=959191"
Categories:
Hidden categories:
This page was last edited on 16 August 2020, at 18:37.
This page has been accessed 111 times.
Content is available under License CC BY-SA 3.0 unless otherwise noted.
Privacy policy
About EverybodyWiki Bios & Wiki
Disclaimers
Mobile view