Shadow Puppet Theatre or SPT for short is a 4 piece rock band hailing from Kuala Lumpur. The band was established in 2016, and since then have released their debut english album "John Doe" and their malay single "Sendiri" with 3 music videos in total.

Shadow Puppet Theatre or SPT, is a Kuala Lumpur based rock band formed in April 2016. Shortly after forming, the band wrote and recorded their first single “Insomnified” in July 2016, and continued to further write and produce the next 4 songs which were then released in the bands first EP “Nightvision” in March 2017.

In December 2018 SPT released their debut english album John Doe together with 2 music videos for the tracks “John Doe” and “Mystery Girl” which found their way on to a number of international music blogs. By the end of the year, John Doe was reviewed and named as one of the best albums of 2018 by ROTTW Magazine.

SPT released their 3rd music video for their inaugural malay single “Sendiri” in April 2019 and the song was first aired on Traxx.fm in June. The band also landed themselves in the Malaysia Book of Records for the Highest Altitude Live Music performance together with Ayda Jebat in July. In December 2019 Brunei's Kristal.fm aired SPT's lead English single “John Doe” and SPT's Malay single "Sendiri" in January 2020 and on February 2020 at ERA Sabah and Sarawak radio station.

One of the best albums of 2018 -ROTTW Magazine 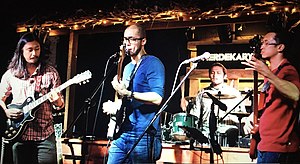 Retrieved from "https://en.everybodywiki.com/index.php?title=Shadow_Puppet_Theatre&oldid=959409"
Categories:
Hidden categories:
This page was last edited on 16 August 2020, at 20:41.
This page has been accessed 85 times.
Content is available under License CC BY-SA 3.0 unless otherwise noted.
Privacy policy
About EverybodyWiki Bios & Wiki
Disclaimers
Mobile view