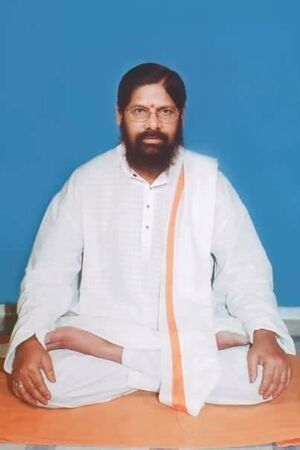 Sri Swarupananda Brahmachari (Bengali: স্বরূপানন্দ ব্রহ্মচারী), born on 8 November 1954, is an Indian guru and Kriya Yogi in the lineage of Mahavatar Babaji, Sri Shyamacharan Lahiri Mahasaya, Swami Sri Yukteshwar Giri, Paramhamsa Yogananda, and Paramhamsa Hariharananda. He was born as Tapan Kuman Bose (Bengali: তপন কুমার বসু) in Kolkata, West Bengal. At the tender age of eight years, he was initiated into Kriya Yoga by his guru Paramahamsa Hariharananda. In the year 1994, he attained the highest spiritual stage of Yoga, i.e., the complete communion with God.

He obtained his master’s Degree in English literature from the University Of Calcutta and joined the Indian Railway Services. During his short tenure in the Indian Railways, he initiated many spiritual seekers into Kriya Yoga at the behest of his Gurudev Paramhamsa Hariharananda.

He received initiation into all the advanced stages of Kriya Yoga by his guru Paramhamsa Hariharananda. At present he lives in the suburbs of Kolkata, India. He is an ordained and anointed guru in the spiritual tradition of Kriya Yoga. He teaches and imparts Kriya Yoga techniques to his disciples in India[1] as well as in western countries.

He has graced himself in the company of many great sages of different spiritual lineages of India including Sri Omkarnathji, Sri Atmadev Avadhoot, Anandamoyee Maa, and Sri Mohonananda Brahmachari.

In a video posted on the platform, "YouTube"[2] Swarupananda Brahmachari espouses some of his Teachings. He says the following:

"Kriya Yoga should always be practiced under the close guidance of a Guru. There should be a contact between a teacher and the taught; meaning the Guru and disciple should be very close and regular. Under the guidance of a guru anyone can practice Kriya Yoga."

"It is not possible to learn Kriya Yoga by watching online video, lessons, or via Skype. One needs to be in the direct contact of a Guru, one who has attained the highest stage of Samadhi."

In his book, Kriya Yoga, Swarupananda Brahmachari writes about the benefits of Kriya Yoga. The following passages were taken from his book:

"Kriya Yoga is an ancient scientific technique for the well-being of body, mind and soul. One gets benefit instantly when one learns it from one’s Guru."

"Practice of Kriya removes chances of several malaises. For instance it keeps the heart and lung healthy, cures acidity and stomach problems, improves appetite and also strengthens liver, pancreas, and kidney. It also arrests ageing. In brief, it is a panacea for all disease."

"The path shown by Yogiraj Sri Shyamacharan Lahiri Mahasaya is the only path and is known to be Kriya Yoga and the practitioners of the same as kriyavan. Kriya Yoga is Gurucentric. Since the practice of Kriya Yoga enables a kriyavan to have enriching and enlightening experiences, various feelings thus experienced make him respectful towards it. In this practice, there is no scope for any cumbersome method of ‘kumbhak’(holding breath within), as a result of which a person does not face any adverse consequences. The significance of Kriya Yoga lies in the fact that it helps externally oriented senses and mind to become internally oriented. This gives peace of mind and solace to the kriyavan. The salient processes of pranayama of kriyayog soothens the breathing gradually."

Share
Retrieved from "https://en.everybodywiki.com/index.php?title=Sri_Swarupananda_Brahmachari&oldid=1118972"
Categories:
Hidden categories:
This page was last edited on 14 November 2020, at 06:38.
Content is available under License CC BY-SA 3.0 unless otherwise noted.
This page has been accessed 3,570 times.
Privacy policy
About EverybodyWiki Bios & Wiki
Disclaimers