From EverybodyWiki Bios & Wiki
Jump to:navigation, search
For other uses, see St. Pancras.
‹ The template Infobox UK place is being considered for conversion to a wrapper. ›

St Pancras (/ˈpæŋkrəs/) is an area of Central and North West London. For many centuries the name was used for various officially designated areas, but it is now used mainly for the railway station and for upmarket venues in the immediate locality, having been largely superseded by other place names including Kings Cross and Somers Town.

A map showing the wards of St Pancras Metropolitan Borough as they appeared in 1916.

The district now encompassed by the term "St Pancras" is not easy to define, and its usage as a place name is fairly limited. The name is sometimes applied to the immediate vicinity of the eponymous railway station, but King's Cross is the usual name for the area around the two mainline stations as a whole. 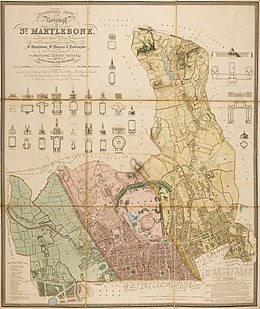 St Pancras was originally a medieval parish, which ran from close to what is now Oxford Street north as far as Highgate, and from what is now Regent's Park in the west to the road now known as York Way in the east, boundaries which take in much of the current London Borough of Camden, including its central part. However, as the choice of name for the borough suggests, St Pancras has lost its status as the central settlement in the area.

The original focus of the area was the church, now known by the retronym of St Pancras Old Church. The building is in the southern half of the parish, and is believed by many to be one of the oldest sites of Christian worship in Great Britain. However, in the 14th century the population moved en masse to Kentish Town, probably due to flooding by the River Fleet and the availability of better wells at the new location. A chapel of ease was established there, and the old settlement was abandoned, except for a few farms, until the growth of London in the late eighteenth century.

In the 1790s Earl Camden began to develop some fields to the north and west of the old church as Camden Town.[1] About the same time, a residential district was built to the south and east of the church, usually known as Somers Town. In 1822 the new church of St Pancras was dedicated as the parish church. The site was chosen on what was then called the New Road, now Euston Road, which had been built as London's first bypass, the M25 of its day. The two sites are about a kilometer apart. The new church is Grade I listed for its Greek Revival style; the old church was rebuilt in 1847. In the mid 19th century two major railway stations were built to the south of the Old Church, first King's Cross and later St Pancras. The new church is closer to Euston station.

By the end of the nineteenth century the ancient parish had been divided into 37 parishes, including one for the old church. There are currently 17 Church of England parishes completely contained within the boundaries of the ancient parish, all of which benefit from the distributions from the St Pancras Lands Trust, and most of which are in South Camden Deanery in the Edmonton Area of the Diocese of London.

In the 1950s, St Pancras Council gained a reputation for left-wing radicalism, being referred to as "the most freakish borough in London.[2] The council refused to take part in civil defence preparations for war, which local councils were obliged to provide.[3] John Lawrence as Mayor was monitored by the Home Office and, as of 2016, the Home Office still refuses Freedom of Information requests relating to Lawrence on the grounds of protecting national security.[4]

Housing was in excess demand after the damage and disruption of the Second World War. There was strong opposition to the 1957 Rent Act, which led to a series of decisions that caused serious financial difficulty. John Lawrence and several other councillors were expelled from the Labour Party in 1958, but continued to serve as the Independent Socialists.[5] The Conservative Party won the 1958 council election.[6]

In 1960, there was a widespread rent strike in the district, which led to rioting in September.[7]

The Hardy Tree, growing between gravestones moved while Thomas Hardy was working here

During the 18th and 19th centuries, St Pancras was famous for its cemeteries: as well as the graveyard of Old St Pancras Church, it also contained the cemeteries of St James's Church, Piccadilly, St Giles in the Fields, St Andrew, Holborn, St. George's Church, Bloomsbury, and St George the Martyr, Holborn.[8] These were all closed under the Extramural Interment Act in 1854; the parish was required to purchase land some distance away, and chose East Finchley for its new St Pancras Cemetery.[9]

The disused graveyard at St Pancras Old Church was left alone for over thirty years, until the building of the Midland Railway required the removal of many of the graves. Thomas Hardy, then a junior architect and later a novelist and poet, was involved in this work. Particularly, he placed a number of gravestones around a tree, now known as "the Hardy Tree".[10] The cemetery was disturbed again in 2002-03 by the construction of the Channel Tunnel Rail Link, but much more care was given to the removal of remains than in the 19th century.

The name St Pancras survives in the name of the local parliamentary constituency, Holborn and St. Pancras. One of the political wards in Camden is called St Pancras and Somers Town; however, ward boundaries are chosen to divide a borough into roughly equal slices with little regard to historical boundaries or day-to-day usage. Besides Somers Town and the area around St Pancras Old Church, the ward includes much of Camden Town and the former Kings Cross Goods Yard, which is being redeveloped as a mixed-use district under the name Kings Cross Central. 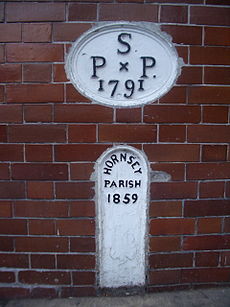 Boundary stone between St Pancras and Hornsey at Highgate

Old St Pancras Church and its graveyard have links to Charles Dickens, Thomas Hardy, and the Wollstonecraft circle.[10] Immediately to the north of the churchyard is St Pancras Hospital, originally the parish workhouse and latterly the London Hospital for Tropical Diseases. St Pancras is one of the best-known railway stations in England. It has been extended and is now the terminus for the Eurostar services through the Channel Tunnel.

Retrieved from "https://en.everybodywiki.com/index.php?title=St_Pancras,_London&oldid=462502"
Categories:
Hidden categories:
This page was last edited on 23 May 2019, at 10:30.
This page has been accessed 198 times.
Content is available under License CC BY-SA 3.0 unless otherwise noted.
Privacy policy
About EverybodyWiki Bios & Wiki
Disclaimers
Mobile view