From EverybodyWiki Bios & Wiki
Jump to:navigation, search
This article is about the political designation by the United States Department of State. For other uses, see State-sponsored terrorism. 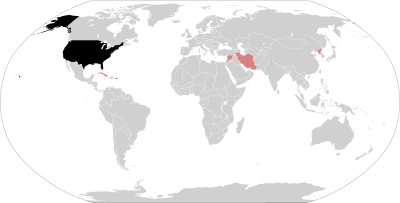 "State Sponsors of Terrorism" is a designation applied by the United States Department of State to countries which the Department alleges to have "repeatedly provided support for acts of international terrorism".[1][2] Inclusion on the list imposes strict unilateral sanctions.

The countries currently on the list are Iran, North Korea, Sudan, and Syria.

Countries currently on the list[edit]

North Korea was added in 1988, following the 1987 bombing of a South Korean air flight landing near Myanmar and re-listed again in 2017.[5]

On June 26, 2008, President George W. Bush announced that he would remove North Korea from the list. On October 11, the country was officially removed from the list for meeting all nuclear inspection requirements.

The North was initially added because it sold weapons to terrorist groups[6] and gave asylum to Japanese Communist League-Red Army Faction members. The country is also responsible for the Rangoon bombing and the bombing of Korean Air Flight 858.

The Democratic People's Republic of Korea (DPRK) was not known to have sponsored any terrorist acts since the bombing of a Korean Airlines flight in 1987. The DPRK continued to harbor four Japanese Red Army members who participated in a jet hijacking in 1970. The Japanese government continued to seek a full accounting of the fate of the 12 Japanese nationals believed to have been abducted by DPRK state entities; five such abductees have been repatriated to Japan since 2002. In the February 13, 2007 Initial Actions Agreement, the United States agreed to "begin the process of removing the designation of the DPRK as a state-sponsor of terrorism.

Terrorology specialist Gus Martin, writes in his university-level textbook, Understanding Terrorism: Challenges, perspectives and issues that “it is important to note that the State Department’s list includes countries that have significantly reduced their involvement in terrorism, such as North Korea and Cuba. For example North Korea was at one time quite active in attacking South Korean interests. In November 1987, North Korean operatives apparently destroyed Korean Airlines Flight 858, which exploded in Myanmar (Burma), The North Korea government has since renounced its sponsorship of terrorism.”[8]

The U.S State Department said it made the decision as Pyongyang had agreed to the verification of all of its nuclear programs, etc.

In April 13, 2009, Pyongyang agreed to dismantle the Yongbyon facility as part of an aid-for-disarmament deal, and in response, the US removed North Korea from its terrorism blacklist. Despite requests from the South Korea government to put North Korea back on the list after it sunk the Navy ship the ROKS Cheonan in 2010, the Obama administration stated that it will not do so because the act was conducted by only the North Korean military and was thus not an act of terror.[9] However, following the incident, the Obama administration also stated that it would now closely monitor North Korea for signs for a return to international terrorism.[9] US State Department spokesman P.J Crowley also said that returning North Korea to the list was under continual review.[9]

Former Secretary of State Hillary Clinton stated that she was considering renaming North Korea on the List of State Sponsors of Terrorism.[10] As of 2011[update], North Korea, unlike the other countries removed and the designated state sponsor of terrorism Sudan, is still listed as not fully cooperating with the United States to reduce terrorism.[11]

In February 2017, following the alleged state-sponsored murder of Kim Jong-nam (Supreme Leader Kim Jong-un's half-brother) using the nerve agent VX (banned under the international Chemical Weapons Convention, a convention which the North Korean government has not signed), pressure has been placed on the Trump administration to revoke Bush's lifting of sanctions[5] but in April, the US politicians backed a bill to reinstate North Korea as a state sponsor of terror following the 2017 Shayrat missile strike in Syria, which North Korea viciously condemned.[12] In August of the same year, the nation launched a missile that flew over Hokkaido, Japan, promoting severe condemnation from other states. In September, the parents of Otto Warmbier, who had died after being imprisoned in the nation, stated that they want North Korea to be relisted for his apparent murder.[13]

In addition, the nation regularly aids Islamic terrorists through training and selling weapons. The nation is enemies with Israel and backs Hamas, a group classified as a terrorist organization by western nations and Japan, in all conflicts between them, and Hamas, in return, supports North Korea in the ongoing Korean conflict.[14] North Korea has close ties to Iran and Syria, who are also blacklisted nations.[15]

According to Country Reports on Terrorism 2013:[4]

Countries that have been removed[edit]

According to the United States of America, Cuba has a history of supporting revolutionary movements in Spanish speaking countries and Africa. "Havana openly advocates armed revolution as the only means for leftist forces to gain power in Latin America, and the Cubans have played an important role in facilitating the movement of men and weapons into the region. Havana provides direct support in the form of training, arms, safe havens, and advice to a wide variety of guerrilla groups. Many of these groups engage in terrorist operations." Cuba "encouraged terrorism in the hope of provoking indiscriminate violence and repression, in order to weaken government legitimacy and attract new converts to armed struggle" In 1992, after the Soviet collapse, Fidel Castro stressed that his country’s support for insurgents abroad was a thing of the past.[16]

On December 17, 2014, an agreement to restore relations with Cuba was reached, the President has instructed the Secretary of State to immediately launch a review of Cuba's inclusion on the list, and provide a report to the President within six months regarding Cuba’s alleged support for international terrorism.[18] Obama announced on April 14, 2015, that Cuba was being removed from the list.[19] Cuba would not come off the list until after a 45-day review period, during which the U.S. Congress could try blocking Cuba's removal via a joint resolution.[20] Congress did not act, and Cuba was officially removed from the list on May 29, 2015.[21]

Iraq was added to the list on December 29, 1979, and removed in 1982 to allow US companies to sell arms to it[citation needed] while it was fighting Iran in the Iran–Iraq War; it was re-added following its 1990 invasion of Kuwait. The State Department's reason for including Iraq was that it provided bases to the Mujahedin-e-Khalq (MEK), the Kurdistan Workers Party (PKK), the Palestine Liberation Front (PLF), and the Abu Nidal organization (ANO). It was again removed following the 2003 invasion and the overthrow of the government of Saddam Hussein. Following the invasion, US sanctions applicable to "state sponsors of terrorism" against Iraq were suspended on May 7, 2003, and President Bush announced the removal of Iraq from the list on September 25, 2004. This is due to the fall back of the Iraqi rebels.

On May 15, 2006, the United States announced that Libya would be removed from the list after a 45-day wait period.[22] Secretary of State Condoleezza Rice explained that this was due to "...Libya's continued commitment to its renunciation of terrorism".[23]

There is no evidence that Libya was, is a state sponsor of terrorism from 2011 - 2017. There is no official state that has officially sponsored terrorist activity, in fact, the official state is fragmented into 3 - 6 different states. Each state has its own government. Due to the ongoing civil war of 2011, and the political divide, Libya, security wise is dangerous. However, sponsorship of terrorism is a subjective subject.

The attack on the US embassy in Benghazi in 2012, was carried out by an Extremist Islamist militia group known as Ansar Al Sharia. This group is not officially part of any larger state authority, and is not recognized as one. In fact, it is recognized as a criminal organization by the wider Libyan public.

Traveling to Libya is ill-advised, however there still is a presence of Foreign nationals working in Libya.

South Yemen was added to the list on December 29, 1979. It had been branded a sponsor of terrorism due to its support for several left-wing terrorist groups. South Yemen was dropped from the list in 1990 after it merged with the Yemen Arab Republic (North Yemen), to become Yemen.

Timeline of the list[edit]

The sanctions which the US imposes on countries on the list are:

The U.S. Country Reports on Terrorism also describes "Terrorist safe havens" which "described in this report include ungoverned, under-governed, or ill-governed physical areas where terrorists are able to organize, plan, raise funds, communicate, recruit, train, transit, and operate in relative security because of inadequate governance capacity, political will, or both".[26]

In the U.S. Annual report published in July 2017, which was mandated by the Congress titled "Country Report on Terrorism", the State Department listed Pakistan among the nations and regions providing “safe havens” to terrorists. It stated that terror groups like the LeT and JeM continue to operate, train, organise and fundraise inside the country in 2016.[27][28]

“Pakistan did not take sufficient action against other externally focused groups, such as Lashkar-e-Taiba (LeT) and Jaish-e-Mohammad (JeM) in 2016, which continued to operate, train, organise, and fundraise in Pakistan,” the report said. It further said India continue to experience cross-border attacks, “including by Maoist insurgents and Pakistan-based terrorists”.[29][30]

Retrieved from "https://en.everybodywiki.com/index.php?title=State_Sponsors_of_Terrorism&oldid=963811"
Categories:
Hidden categories:
This page was last edited on 17 August 2020, at 19:17.
This page has been accessed 390 times.
Content is available under License CC BY-SA 3.0 unless otherwise noted.
Privacy policy
About EverybodyWiki Bios & Wiki
Disclaimers