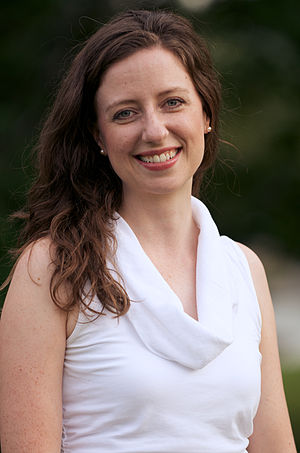 Stephanie Gray Connors is a Canadian anti-abortion activist.[1] She spent 12 years as executive director and co-founder of the Canadian Centre for Bio-Ethical Reform, and now writes and speaks on behalf of her ministry, Love Unleashes Life.[2]

Gray Connors was born in Vancouver and raised in Chilliwack, British Columbia. She attended high school at St. John Brebeuf Regional Secondary School in Abbotsford, where she graduated in 1998.[3] Later that year, she enrolled at the University of British Columbia (UBC) in Vancouver.

In 1999, a significant moment in her life occurred when she joined the UBC Lifeline Club, a campus anti-abortion organization and was elected president. She retained this position until graduation in 2002.[1] Gray Connors completed a Bachelor of Arts degree in political science. [1] She has been Catholic all her life. [4] After graduation Gray Connors ultimately chose to work full time for the anti-abortion movement.[4]

In 2001, Gray Connors, with Jojo Ruba, founded the Canadian Centre for Bio-Ethical Reform.[2] She served as executive director for 12 years.[1] One of CCBR's most prominent ministries is the Genocide Awareness Project featured at college campuses throughout the United States and Canada.[4][6][7]

The Genocide Awareness project compares abortion to the Holocaust and other forms of genocide. It contains displays of graphic images of abortion, mass graves, and public lynchings.[4][8][9]

Share
Retrieved from "https://en.everybodywiki.com/index.php?title=Stephanie_Gray&oldid=1023716"
Categories:
Hidden categories:
This page was last edited on 1 October 2020, at 00:40.
Content is available under License CC BY-SA 3.0 unless otherwise noted.
This page has been accessed 1,428 times.
Privacy policy
About EverybodyWiki Bios & Wiki
Disclaimers