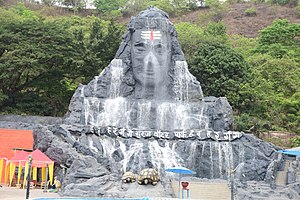 This waterfall is based on the mythological story of river Ganga being brought to the earth through the great efforts of King Bhagirath. When Ganga was being brought to the earth, the force was so much that it was feared that it would wash away the earth. King Bhagirath, therefore prevailed upon Lord Shiva to first take Ganga into his flocks (jata) and then allow it to flow downwards

The water park has its own open lawn themed like a village called 'Suraj Gadh' which regularly hosts weddings and parties.[7] Also, they have other open spaces like 'Sai Garden' & 'Sai Kutir' which are ideal for destination wedding, birthday parties etc. They also have a 'Amphitheater' where in one can host a movie/drama night with their family & friends.The 'Haveli' is a fully air-conditioned banquet ideal for pre-wedding funstions, business meetings etc.[8] Suraj Water Park has a museum of locks which showcases more than 1600 ancient locks for which it holds Limca record.[9] The water park has also hosted video shoots for Indian movies.[10]

Retrieved from "https://en.everybodywiki.com/index.php?title=Suraj_Water_Park&oldid=965291"
Categories:
Hidden categories:
This page was last edited on 18 August 2020, at 02:21.
This page has been accessed 458 times.
Content is available under License CC BY-SA 3.0 unless otherwise noted.
Privacy policy
About EverybodyWiki Bios & Wiki
Disclaimers