Peer Syed Ghulam Mohiyyuddin Gilani alias Babuji, (born December 1891) was a Sufi scholar from Golra Sharif,[3] Pakistan belonging to the Chishti order. He was the son of Peer Meher Ali Shah and remained the Sajjada Nashin of shrine Golra Sharif for thirty seven years (from 1937 to 1974).[4][1]

He received his early education from Qari Abdul Rahman of Jawnpur and Maulana Muhammad Ghazi under the supervision of his father Peer Meher Ali Shah.[5][3] 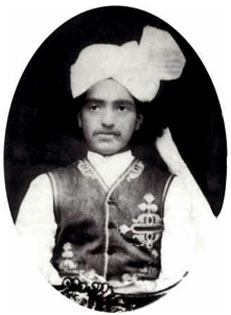 Ghulam Mohiyyuddin in his teens

After completion of the intellectual and spiritual knowledge, his father granted him the caliphate (khilafat) and permission but he did not prepare to make Murid (spiritual disciple) to anyone. Even that his father Peer Meher Ali Shah said, “Who will make the disciple on his hand, then I am responsible for him.” [6][7] 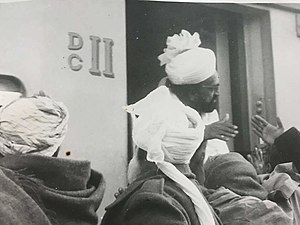 The concept of Wahdat ul Wajood (Ultimate Unity of Being)[edit]

Following the example of his father, Ghulam Mohiyuddin was a firm adherent to the concept of Ibn Arabi's ideology of "Wahdat-ul-Wajood" (Ultimate Unity of Being). According to him, the Divine Will is at work behind all that is happening in the universe. The Divine Will which is absolute and everlasting manifests itself in the diverse aspects of this universe.[8]

Syed Ghulam Mohiyyuddin played an important part in the Pakistan Movement. When some of the people threatened to kill non-Muslim families residing in Golra Sharif, he intervened on the non-Muslims' behalf, provided them with security and later on accompanied them to the Indian border when they were leaving Pakistan for India. He extended a helping hand to even those families wishing to cross the border and live in India. He would take piles of clothing and dry rations to supply to those who were arriving in a state of deplorable misery. As reported by a large number of non-Muslims refugees here and across the border, they were deported to their places with great security and he paid special attention to their protection.[9]

Ghulam Mohiyuddin died on 22 June 1974 after prolonged illness and was buried next to his father in Golra Sharif.

Share
Retrieved from "https://en.everybodywiki.com/index.php?title=Syed_Ghulam_Mohiyyuddin_Gilani&oldid=966062"
Categories:
Hidden categories:
This page was last edited on 18 August 2020, at 07:53.
Content is available under License CC BY-SA 3.0 unless otherwise noted.
This page has been accessed 2,840 times.
Privacy policy
About EverybodyWiki Bios & Wiki
Disclaimers