Syed Ghulam Moinuddin Gilani[1] commonly known as Baray Lala jee born on Saturday, the 22nd May 1920 at Golra Sharif, the then district Rawalpindi was the Sajjada Nashin of Shrine Golra Sharif.[2] [1]He was the grand of Pir Meher Ali Shah.[2][3]He was the son of Syed Ghulam Mohiyyuddin Gilani and father of renowned Pakistani scholar Naseer-uddin-Naseer. He is also the elder brother of Syed Shah Abdul Haq Gilani [2]

Ghulam Moinuddin got his education from Ghulam Muhammad Peshawari, the jurist and lecturer of Golra Sharif. He completed recitation of the Quran on at 1936. He then started reading of Arabic books of Dars-e-Nizami from, Maulana Muhammad Ghazi, in the same institution. Ghulam Moinuddin learned from him up to the chapters “Sharah Jami” and “Hadaya” etc. After the death of Maulana Muhammad Ghazi in 1938, Ghulam Moinuddin's father Syed Ghulam Mohiyyuddin Gilani selected Maulana Ghulam Muhammad Ghotavi (Principal Jamia Abbasia, Bahawalpur), a scholar, for accomplishment of religious knowledge of both his sons. Accordingly, both Ghulam Moinuddin and his brother were admitted in Jamia Abbasia Bahawalpur (now known as Islamia University) in 1938 and were educated under supervision of the Principal of the Jamia. After getting education for seven years in Bahawalpur, Baray Lalajee achieved certificate of Allama and also passed the examination of Maulvi Fazil. He also got lessons of Mathematics by the honourable Sheikh-ul-Jamia.[4] [5] 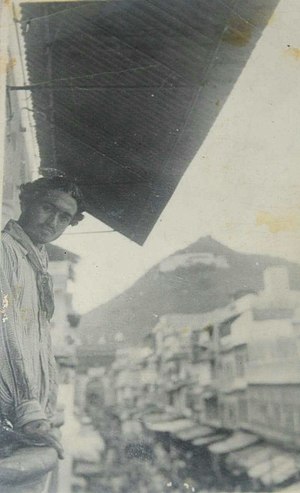 His father specially educated him in religious, ethics, spiritual education, public service, hosting the guests of the shrine and following Shariah and Tareeqat. After demise of his father, all responsibilities of Shrine, Golra Sharif were laid on the shoulders of both the brothers which they performed with great sobriety and affection. Throughout his life he struggled for implementation of the system endowed by Prophet Muhammad. Even during his last days, through a letter, written to the then Prime Minister Mian Nawaz Sharif, he emphasized for implementation of the system of Prophet Muhammad in Islamic Republic of Pakistan.[6] [7] [8]

His poetic work titled “Israr-ul-Mushtaq” was published after his death, by his brother Syed Shah Abdul Haq Gilani for the first time on 1st of Dhul Qa'dah, 1418 A.H[3][9]

After prolonged illness he passed away on the 12th of March 1997. The news of his death was printed in newspapers in headlines and the daily newspapers and magazines published columns, articles and essays about him. Condolences messages from President, Prime Minister of Pakistan, Provincial Governors, Chief Ministers and other dignitaries were published in the newspapers. Religious Scholars of every sect, Saints from every link of chain of spiritualism, the descendents of the saints, the dignitaries, and people from every walk of life came to his brother Syed Shah Abdul Haq Gilani for condolence. His Urs is held every year on the 2nd and 3rd Dhu'l-Qa'dah.