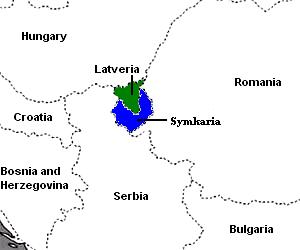 A rendition of the fictional nation of Symkaria (in blue). It borders Latveria (in green) to its north.

Symkaria is a fictional Eastern European country appearing in American comic books published by Marvel Comics. The country was created by Tom DeFalco for the Marvel Universe. It is one of several fictional countries in Eastern Europe created for Marvel Comics.[1] The fictional country is mostly known as being the home of Silver Sable and the Wild Pack team though it is used throughout the Marvel Universe.[2] The country has appeared in issues of Silver Sable, Silver Sable and the Wild Pack, The Amazing Spider-Man, Thunderbolts, Citizen V and the V-Battalion, and other comics published by Marvel Comics.

Symkaria is first mentioned in The Amazing Spider-Man #265 (June, 1985) in connection with the appearance of the character Silver Sable.[3][4] Not much is shown about the country in early comics other than it has an embassy in New York City and it is part of the United Nations within the Marvel Universe. It isn't until The Amazing Spider-Man #322 (1989) that Symkaria is shown in the comics.[5] The country is expanded upon with the creation of the Silver Sable comic book series in 1992.[6] Locations within the fictional country, such as Castle Sable, its capital city, Aniana, and its location next to Latveria, are shown in the Silver Sable series.

Symkaria is generally presented as a small nation in Eastern Europe that borders Latveria. Symkaria is used as the home to the criminal fighter and mercenary, Silver Sable and her Wild Pack. The Wild Pack is a mercenary force, focusing on humanitarian and Nazi-hunting missions, and is one of the nation's major economic forces. Symkaria is also use as the home for the V-Battalion, a secret organization dedicated to protecting the world at any cost. In many story lines, Symkaria is led by a royal family that has ruled more or less benevolently for three centuries. It is recognized by the United Nations of the Marvel Universe.[8]

Symkaria played host to another mercenary group called 'The Circle'. They operated off an island chain in the middle of 'Lake Symkaria'.[9]

In an alternate continuity, where the Transformers interact with the Marvel Universe, Symkaria and Latveria almost go to war. The two countries then play host to a battle between the Avengers and the Transformers.[10]

This article "Symkaria" is from Wikipedia. The list of its authors can be seen in its historical and/or the page Edithistory:Symkaria. Articles copied from Draft Namespace on Wikipedia could be seen on the Draft Namespace of Wikipedia and not main one.

Share
Retrieved from "https://en.everybodywiki.com/index.php?title=Symkaria&oldid=635553"
Categories:
Hidden categories:
This page was last edited on 29 February 2020, at 12:52.
Content is available under License CC BY-SA 3.0 unless otherwise noted.
This page has been accessed 1,183 times.
Privacy policy
About EverybodyWiki Bios & Wiki
Disclaimers