Tempt, Tease and Touch are three fragrances created by English pop girl group the Sugababes. Each perfume and its design were created to represent the group's final line-up Amelle Berrabah, Heidi Range, and Jade Ewen and their music. The fragrances feature a variety of fruity and floral scents.

Released in September 2010, Tempt, Tease and Touch are available in black, pink, and silver or grey flacons respectively; the products were available exclusively at The Perfume Shop at the time of their release before being distributed to selected retailers later. They were sold in 4.3 fluid ounce bottles, with a retail price in the UK of £19.99, and also packaged with a 5.1 oz. container of shimmering body gel as part of a gift set. In 2010, they were featured on a list compiled by Glamour magazine of the most popular celebrity-endorsed perfumes.

We created three fragrances so that you can mix and match depending on how you feel, if you are going out to a party and want a bit of the party glam then Tease is definitely a great scent to wear. The zesty lemonade ingredient will help you to stand out in a crowd and if you are going on a first date then Tempt is beautiful as the rose and musk emulates warmth, leaving a waft of sultry aroma wherever you go.

—Jade Ewen, talking about the development of the fragrances.[1]

The Sugababes announced the launch of their own fragrances in August 2010.[2] Amelle Berrabah said that the group was directly involved in the development of the perfumes.[3] It was initially reported that the three individual scents would correspond to a specific member from the group,[2] but the Sugababes later refuted that idea.[3] Heidi Range specified that the perfumes were not made to represent any of members of the group, and that the three scents were intended for women to wear "for different occasions and for different times of the day".[3] They were promoted as "feminine, sexy, uplifting and ideal for the modern young woman".[4]

Each of three perfumes has an individual scent. The top notes of Tempt include a variety of fruity and floral chords, such as iced tea and purple orchid,[5] and its base notes consist of musk and vanilla.[6] It was promoted as being "in tune with the Sugababes vibe";[5] Ewen specified that its scent was "stronger and sexier than the other two" and more appropriate for evening wear.[7] Tease's scent is identified as a "cocktail of zesty lemonade and juicy pear," including jasmine and magnolia,[5] and its base notes are honey and sandalwood.[6] It was marketed as representative of "the passionate tempo" of the group's music.[8] Touch's scent is described as starting with "a blast of cranberry and lychee with the intensity of violet and rose";[5] the base notes consist of a patchouli and white musk chords.[6][8] It was promoted as "an olfactory representation of Sugababes' pulsing beat".[8]

The bottles for each of the perfumes are composed of two round parts: the body of the bottle and the ball cap. Tempt, Tease and Touch are packaged in black, pink, and grey bottles respectively.[5] A writer for Cosmeticsbusiness.com attributed the Sugababes' decision to release three separate perfumes with Aspects Beauty Company founder Jill Hill's belief that an increasing investment in "collections of scents instead of one major product" would offer more value and be "a relatively safe bet for brands".[9] 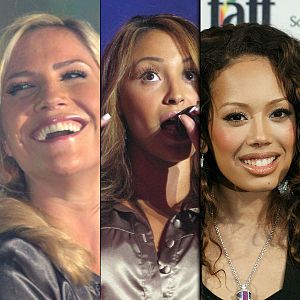 The Sugababes designed and promoted the fragrances.

In September 2010, Tempt, Tease and Touch were released exclusively in The Perfume Shop. The fragrances were released to selected retailers two weeks later.[10] They were one of the first releases following The Perfume Shop's contract to open in-store branded perfume shops in Superdrug stores alongside Peter Andre's fragrances.[11] Tempt, Tease and Touch were sold in 4.3 fluid ounce bottles at a reported retail price of £19.99,[6][12][13] and gift sets that included the 4.3 oz. bottle along with a 5.1 oz. container of shimmering body gel.[14]

The fragrances were promoted through "strong press mentions, television coverage and an extensive on line campaign accompanied in store point of sale material and retailer support.[15] During the launch at Westfield London on September 25, Ewen and Berrabah signed copies of their scents.[16][17][18] Range was absent from the launch after going to hospital and receiving several stitches in her jaw after a fall at her home.[17] The Sugababes also marketed the fragrances through features in tabloid magazines. Each of the three members listed one of the fragrances as one of their favorite beauty products in an interview with Closer;[19][lower-alpha 1] Ewen and Berrabah said that they kept the perfumes in their bags when discussing their beauty secrets with New!.[21]

To further promote the perfumes, Sugababes hosted several online giveaways of sets of the collection.[22] Over the span of three weeks, the group held a contest over Facebook, Twitter, and Flickr.[20][23] Contestants were instructed to share "your most tempting, tease and touching photo", with each week having a specific theme.[20] The weeks' themes were the most tempting photo, the most teasing photo, and the most touching photo.[20][23] The competition ran throughout the first half of November 2010. The prizes were a free bottle of one of the fragrances and the chance to have the winning photo featured on the group's official website.[20]

Tempt, Tease and Touch received a mixed response since its release. A writer from Easy Lifestyle praised the scents, and found that they were as "feminine, sophisticated and sexy as the Babes themselves". The writer felt the design of the bottles made the fragrances "stylish must-have accessor[ies] enhancing any dressing table and come in black, pink and silver, reflecting the mood of the fragrance inside".[24] In October 2010, Glamour magazine listed the perfumes as among the best/most popular "celebrity scents", calling the bottle designs "cute and curvy" and describing the smells as "sweet and fruity".[25] A writer from Look highlighted Tempt as their favorite from the three due to its scent, and also praised the collection as a whole.[26] A writer for the Daily Mirror, however, called the perfumes' release an act of "desperation" by a band fading in relevance.[27]

Retrieved from "https://en.everybodywiki.com/index.php?title=Tempt,_Tease_and_Touch&oldid=1368360"
Categories:
Hidden categories:
This page was last edited on 12 February 2021, at 10:31.
This page has been accessed 47 times.
Content is available under License CC BY-SA 3.0 unless otherwise noted.
Privacy policy
About EverybodyWiki Bios & Wiki
Disclaimers
Mobile view