From EverybodyWiki Bios & Wiki
Jump to:navigation, search
"Baht" redirects here. For the river in Morocco, see Baht River. For the town in Uzbekistan, see Baxt. "฿" redirects here. It is not to be confused with "₿" for Bitcoin.

The baht (/bɑːt/; Thai: บาท, pronounced [bàːt]; sign: ฿; code: THB) is the official currency of Thailand. It is subdivided into 100 satang (สตางค์, pronounced [sətāːŋ]). The issuance of currency is the responsibility of the Bank of Thailand.

According to SWIFT, as of February 2017, the Thai baht is ranked as the 10th most frequently used world payment currency.[1]

According to a report in the South China Morning Post, the China Banknote Printing and Minting Corporation produces at least some Thai banknotes and coins.[2]

The Thai baht,[3] like the pound, originated from a traditional unit of mass. Its currency value was originally expressed as that of silver of corresponding weight (now defined as 15 grams), and was in use probably as early as the Sukhothai period in the form of bullet coins known in Thai as phot duang (Thai: พดด้วง).[4] These were pieces of solid silver cast to various weights corresponding to a traditional system of units related by simple fractions and multiples, one of which is the baht. These are listed in the following table:[5][6]

That system was in use up until 1897, when the decimal system devised by Jayanta Mongkol, in which one baht = 100 satang, was introduced by King Chulalongkorn. However, coins denominated in the old units were issued until 1910, and the amount of 25 satang is still commonly referred to as a salueng, as is the 25-satang coin.

Until 27 November 1902, the baht was fixed on a purely silver basis, with 15 grams of silver to the baht. This caused the value of the currency to vary relative to currencies on a gold standard. In 1857, the values of certain foreign silver coins were fixed by law, with the one baht = 0.6 Straits dollar and five baht = seven Indian rupees. Before 1880 the exchange rate was fixed at eight baht per pound sterling, falling to 10 to the pound during the 1880s.

In 1902, the government began to increase the value of the baht by following all increases in the value of silver against gold but not reducing it when the silver price fell. Beginning at 21.75 baht = one pound sterling, the currency rose in value until, in 1908, a fixed peg to the British pound sterling was established of 13 baht = one pound. This was revised to 12 baht in 1919 and then, after a period of instability, to 11 baht in 1923. During World War II, the baht was fixed at a value of one Japanese yen.

The baht was originally known to foreigners by the term tical,[10] which was used in English language text on banknotes until 1925.[11]

Rama III (1824-1851) was the first king to consider the use of a flat coin. He did so not for the convenience of traders, but because he was disturbed that the creatures living in the cowrie shells were killed. When he learned of the use of flat copper coins in Singapore in 1835, he contacted a Scottish trader, who had two types of experimental coins struck in England. The king rejected both designs. The name of the country put on these first coins was Muang Thai, not Siam.[12][13]

In 2008, the Ministry of Finance and the Royal Thai Mint announced the 2009 coin series, which included changes in materials to reduce production costs as well as an update of the image on the obverse to a more recent portrait of the king. The two-baht coin, confusingly similar in color and size to the one-baht coin, was changed from nickel-clad low-carbon steel to aluminium bronze. New two-baht coin was the first of the new series released on February 3, 2009, followed by a satang coin in April, a five-baht coin in May, a ten-baht coin in June, and a one-baht coin in July 2009.

In 2018, the Royal Thai Mint and the Ministry of Finance issued a new series of general circulation coins, featuring the same standard specifications, but feature a portrait of its current king, Maha Vajiralongkorn.

In February 2010 the Treasury Department of Thailand stated that it has been planning a new circulation 20 baht coin.[18]

The year 1902 marked the introduction of reforms by prince Jayanta Mongkol after his observations of banking practices in Europe, which became an important landmark in the inauguration of paper money in Thailand.[19] On September 19, 1902, the government introduced notes which were printed by Thomas De La Rue & Company Limited, England, during the reigns of Kings Rama V and Rama VI, denominated 5, 10, 20, 100, and 1000 ticals, still called baht in the Thai text — each denomination having many types,[20] with 1 and 50 tical notes following in 1918. In 1925, notes were issued in denominations of 1, 5, 10, 20, 100, and 1,000 baht with the denomination in both Arabic and Thai numerals without English text;[21] English speakers continued to refer to these as "ticals".[22]

In 1942, the Bank of Thailand was founded and took over responsibility for the issuance of paper money. 50 baht notes were briefly reintroduced in 1945, with 50 satang notes issued in 1946. The one baht note was replaced by a coin in 1957 and the five baht was replaced in 1972. 50 baht notes were again reintroduced in 1985, with the 10 baht note replaced by a coin in 1988. The EURion constellation has been used on the reverse of 100 and 1000 baht notes since 2003. Older notes are occasionally still found in circulation, for example, 10 baht notes, and these can usually be spent without problem. In any case, they can be exchanged for free in banks.

On 27 July 2010, the Bank of Thailand announced that the 16th series banknotes would enter circulation in December 2010.[23][24] On 9 August 2012, the Bank of Thailand issued a new denomination banknote, 80 baht, to commemorate queen Sirikit's 80th birthday.[25] It was the first Thai banknote that featured Crane's Motion security thread.

In 2017, the Bank of Thailand announced a new family of banknotes in remembrance of its late king Bhumibol Adulyadej (Rama IX). The notes are the same size and dimensions as the "Series 16" banknotes, with the front designs as before, but the back designs featuring images of the king's life in infancy, adolescence and maturity. The new family of banknotes were issued on September 20.[26]

In 2018, the Bank of Thailand announced a new family of banknotes featuring a portrait of its current king, Maha Vajiralongkorn. The main colors and dimensions of the notes are the same as before, with the back designs featuring images of the Kings of Thailand from past to present. The 20, 50 and 100 baht banknotes were issued on Chakri Memorial Day, April 6, 2018. The final two denominations, 500 and 1,000 baht were issued on the anniversary of the birth of King Maha Vajiralongkorn, July 28, 2018.[27]

Images of banknotes have been removed lest they infringe copyright,[28] but may be viewed at the Thai-language article linked in the margin.

In addition to the banknotes currently in circulation, numerous commemorative notes have been issued:

Money and unit of mass[edit] 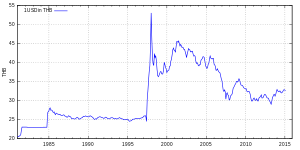 Historical exchange rate of THB/USD since 1971

Historical exchange rate of THB/EUR since 2005

The Bank of Thailand adopted a series of exchange controls on 19 December 2006, which resulted in a significant divergence between offshore and onshore exchange rates, with spreads of up to 10 percent between the two markets. Controls were broadly lifted on 3 March 2008 and there is now no significant difference between offshore and onshore exchange rates.[48]

Retrieved from "https://en.everybodywiki.com/index.php?title=Thai_baht&oldid=516517"
Categories:
Hidden categories:
This page was last edited on 18 August 2019, at 12:45.
This page has been accessed 414 times.
Content is available under License CC BY-SA 3.0 unless otherwise noted.
Privacy policy
About EverybodyWiki Bios & Wiki
Disclaimers
Mobile view