The lev (Bulgarian: лев, plural: лева, левове / leva,[2] levove) is the currency of Bulgaria. It is divided in 100 stotinki (стотинки, singular: stotinka, стотинка). In archaic Bulgarian the word "lev" meant "lion", a word which in the modern language became lăv (IPA: /lɤf/) (in Bulgarian: лъв). Stotinka comes from the word "sto" (сто) - a hundred.

The lev was introduced as Bulgaria's currency in 1881 with a value equal to the French franc. The gold standard was suspended between 1899 and 1906 and suspended again in 1912. Until 1916, Bulgaria's silver and gold coins were issued to the same specifications as those of the Latin Monetary Union. Banknotes issued until 1928 were backed by gold ("leva zlato" or "zlatni", "лева злато" or "златни") or silver ("leva srebro" or "srebarni", "лева сребро" or "сребърни"). 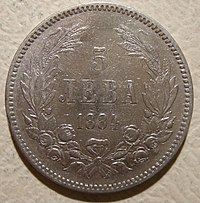 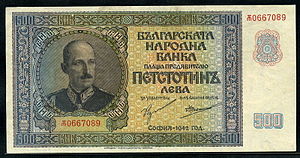 In 1952, state notes (dated 1951)[4] were issued in 1, 3 and 5 leva, together with notes of the National Bank for 10, 25, 50, 100 and 200 leva. 500-lev notes were printed but not issued. 1 lev notes were withdrawn after the introduction of a coin in 1960. 1, 3, and 5 leva depict the state emblem, while all denominations 10 leva and up depict Georgi Dimitrov, who had a postmortem cult of personality built up around him by that time period. The reverse side of 1 lev, 3 and 5 leva notes depict hands holding up the hammer and sickle, while higher denominations each depict workers at various trades.

In 1962, another redenomination took place at the rate of 10 to 1, setting the exchange rate at 1.17 leva = 1 U. S. dollar, with the tourist rate falling to 2 leva on February 1, 1964. The ISO 4217 code was BGL. After this, the lev remained fairly stable for almost three decades. However, like other Communist countries' currencies, it was not freely convertible for Western funds. Consequently, black market rates were five to ten times higher than the official rate. During the period, until 1989 the lev was backed by gold, and the banknotes have the text stating: "The bank note is backed by gold and all assets of the bank" (Bulgarian: "Банкнотата е обезпечена със злато и всички активи на банката").

After the fall of communism, Bulgaria experienced several episodes of drastic inflation and currency devaluation. In order to change this, in 1997, the lev was pegged to the Deutsche Mark, with 1000 lev equal to 1 DM (one lev equal to 0.1 pfennig).

Since 1997, Bulgaria has been in a system of currency board, and all Bulgarian currency in circulation has been backed 100% by the foreign exchange reserves of the Bulgarian National Bank (BNB).

In 1962, aluminum-bronze 1, 2, and 5 stotinki, and nickel-brass 10, 20 and 50 stotinki and 1 lev were introduced. The coin series strongly resembles coinage from the Soviet Union during the same period, particularly in design and size.

The state emblem is depicted on the obverse of all coins, which went through several changes. The first change in 1962 with the introduction of the new coinage, and the second change in 1974, with the ribbons being the most noticeable change.

A number of commemorative 2 leva coins also circulated during this period, often released into circulation as they had relatively high production numbers and little collector's value. Higher denomination lev coins have also been introduced into circulation at an irregular basis with varying sizes and metallic compositions, including silver. Mostly due to an overstock of numismatic coins not getting sold to collectors. Similar occurrences to this can be seen with high denomination coins from East Germany and Poland during the same period.

On 5 July 1999 the lev was redenominated at 1000:1 with 1 new lev equal to 1 Deutsche Mark.[5] The ISO 4217 currency code for the new Bulgarian lev is BGN. The currency was no longer backed by gold and silver; thus the banknotes lost the text stating the lev's backing by gold or bank assets.

Main article: Bulgaria and the euro

Since Bulgaria gained EU membership in 2007 various dates have been suggested as the expected end of the lev: towards the end of that year 1 January 2012 was a possible date;[6] however, the global financial crisis of 2008 and the Eurozone crisis cooled the initial enthusiasm for the euro. Nevertheless, in 2009 The Economist noted suggestions to accelerate Bulgaria's path to the euro, or even let it be adopted immediately, despite the EU institutions' unwillingness to deviate from a policy of euro adoption only after five Euro convergence criteria have been met.[7] In 2011 the Bulgarian finance minister Simeon Djankov acknowledged his earlier eagerness for Bulgaria to join the euro, but considered 2015 as a more likely date.[8] If Bulgaria follows the standard path to euro adoption, it would use the euro two years after joining the European exchange rate mechanism (ERM II) (a formality given the lev's peg to the euro). In late 2010, given Bulgaria's improving economy, analysts thought that Bulgaria would join the ERM II the following year.[9] However, the continued postponement of joining the mechanism has prevented Bulgaria meeting all five convergence criteria: its rebounding economy later met the four other criteria.[10]

In 2004, 2005 and 2007 commemorative circulation issues were struck of the 50 stotinkas coin.[13] Also many commercial commemorative coins have been minted.

The contemporary 2 lev banknote contains Paisiy Hilendarski, his monastery, the Coat of Arms of the Second Bulgarian Empire, images and seals of some kings, a double-headed eagle; the 5 lev banknote contains the painter Ivan Milev Lalev, a man with a crown of thorns, a face with shield(or a pregnant women with a belly) touching it, and the sideview of a creature with а sickle and hood resembling the death; on the 10 lev banknote Petar Beron is visible with a whale, a rhino, a telescope, a globe of Earth and Saturn; a 20 lev banknote contains Stefan Stambolov, the 1878 seal of Veliko Tarnovo, three arrows hitting heels of lions, the parliament building hit by an arrow, a lion hit by an arrow in the back behind an eagle, a flywheel with six arrows; on the 50 lev Pencho Slaveykov and the ghost of his lover are shown, a phaeton, the building of the theater in Sofia and a bird; on the 100 lev banknote Aleko Konstantinov is shown with his work "Bay Ganyo untold tales of a contemporary Bulgarian" hit by a spear in the chest through his pocket watch.

The fourth lev was pegged to the German mark at par from the start. With the replacement of the Deutsche Mark by the euro, the lev's peg effectively switched to the euro at the rate of 1.95583 leva = 1 euro (precisely equivalent to the Deutsche Mark's fixed exchange rate to euro). This rate is unlikely to change before the lev's eventual retirement. (Bulgaria committed to adopting the euro as part of its joining the EU.) On 25 April 2005, when the country's EU accession treaty was signed, the BNB issued a commemorative coin with the face value of 1.95583 leva.

Retrieved from "https://en.everybodywiki.com/index.php?title=Bulgarian_lev&oldid=207264"
Category:
Hidden categories:
This page was last edited on 5 November 2018, at 13:09.
This page has been accessed 469 times.
Content is available under License CC BY-SA 3.0 unless otherwise noted.
Privacy policy
About EverybodyWiki Bios & Wiki
Disclaimers