Search The Garden on Amazon.

The Garden is a 2017 UK silent horror art film written, produced, edited and directed by Finn Callan. The film features a largely cryptic plot with no dialogue and is primarily set in a bleak black and white environment comprised of hills, trees and a windmill as well as several sections involving harsh, grating noise paired with abstract, distorted imagery.

The Garden premiered in Brighton at the Dukes at Komedia Picturehouse on 30 April 2017, and was released online on Amazon Prime Video and through a YouTube link on the film's main website on November 2nd, 2017.[2] The Garden was shown in various underground film venues and art galleries, including The Horse Hospital in London on 16 January 2018. The film's critical response has been polarizing, allegedly prompting several walkouts during screenings. Finn Callan, the film's director, has stated that his expectations "had been met" and admitted that the film's original plan was to be "deliberately esoteric and incomprehensible".[3]

The film opens with a sequence in which Mask's head can be seen floating in a black void staring at a flickering television screen, paired with a loud droning noise and images of a bright light growing. The sequence ends with a light appearing in Mask's eye socket and then fading into the blackness while the screen lowers in volume and disappears.

In a landscape of hills and trees, a masked, humanoid figure (Mask) enters a windmill on top of a grassy hill. Inside, Mask is then interrupted by a man dragging a Television set on a stand surgically attached to his arm (TV Man) who throws five VHS tapes at him. Mask inserts one into the TV set's VHS player which causes a loud noise to sound, the aspect ratio to change from 4:3 ratio to 16:9 ratio ratio and a bombardment of grainy, deformed visuals to appear in Mask's vision. TV Man is implied through the visuals to have left the windmill and collapsed in the tall grass during this. Mask faints and is sucked into a void.

Mask, in the void, watches a television screen show a creature (Screenchild) waking up, walking around, picking up and breaking a stick, looking at flowers and entering a dark forest. The sequence ends with Screenchild screaming at the camera and then disappearing, over which Mask disappears from the void. Afterwards is a sequence in which we see from the perspective of something lying in tall grass (most likely TV Man) as Screenchild appears and approaches it.

Afterwards, two screens collide together inside the void, one of which the black and white world is inside, the other has a grainy image of a human eye (Screenchild). Screenchild rushes up a flight of stairs and finds a book containing the storyboard for The Garden, rips it apart and throws it off screen, leading it to be teleported into the black and white world where Mask picks it up and has a vision in which several blindfolded bodies lying underneath a tree. Mask rushes over to the tree to find them there, accompanied with loud dramatic music which Screenchild turns off via a speaker dial in the screen world. As Mask walks away from the bodies aimlessly, Screenchild pulls a plug out from a socket in the screen world which creates a loud cacophonous noise. Mask collapses on the grass as Screenchild screams in tandem with the noise. Mask stops moving and falls limp on the grass as the camera crew move forward towards his body. A beam of black light then pulls particles from the air, altering the film's aspect ratio back to 4:3 ratio.

Mask then appears in the void where he sees a display of bright, heavenly shapes and imagery of a space station accompanied by slow, harmonious music. The imagery then abruptly snaps to a hyper detailed, over-sharpened image of the station and the music changes into discordant, harsh noise. The film's frame shakes violently and recedes backwards, displaying the blank screen once again. The screen then displays an extreme close up of Screenchild screaming in pain while Mask watches. Screenchild is then abruptly dragged into the darkness by an unknown entity.

Mask then watches as The Garden being played back to him and the TV then turns off. The film ends with Mask receding into the darkness and both eye sockets filling up with light as the TV slowly appears again. 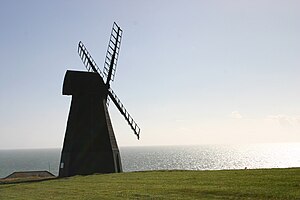 The Old Windmill in Rottingdean used in the film

The original screenplay, written by Callan, was twenty pages long but only eight pages were used in the actual filming process. Principal photography took place over two weeks in July 2016 and was shot on 4K Blackmagic cinema cameras, filmed entirely by natural light. Callan told director of photography Fyodor Houtheusen to make the film look as "photographic as humanly possible" to achieve a sense of picturesque stillness to the cinematography. Editing then went on until April 2017 to get the film ready for premiere. Almost all of the sound design was created in post production as very few sounds were recorded live on set.[4]