Hi, thanks a lot for review! But, there are plenty of wiki pages, that have only their websites as a source and yet they got accepted..e.g. Ernst Schering Prize - Wikipedia or Alexander von Humboldt Professorship? So I don't understand why my sources aren't enough..some of my sources are from Nobel Prize's website, I wonder what source can be better than that?

The Hansen Family Award was launched in 2000 by Prof. Kurt Hansen – former Chairman of the Board of Management and Supervisory Board of Bayer AG.

The Bayer Foundation presents the Hansen Family Award with prize money of €75,000 to scientists in German speaking countries for pioneering research in scientific areas related to medical science and medicine, particularly in the following fields:

The foundation presents the award every second year, alternating with the Otto Bayer Award.

Prof. Kurt Hansen served as Chairman of the Board of Management of Bayer AG from 1962 to 1974. Kurt Hansen was a natural scientist and certified management assistant, he believed that support for research in the fields of science and medicine was of central importance for the long-term success of the company and subsequently established the award with an endowment. 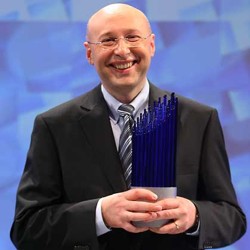 Share
Retrieved from "https://en.everybodywiki.com/index.php?title=The_Hansen_Family_Award&oldid=2610829"
Hidden category:
This page was last edited on 11 May 2022, at 10:39.
Content is available under License CC BY-SA 3.0 unless otherwise noted.
This page has been accessed 45 times.
Privacy policy
About EverybodyWiki Bios & Wiki
Disclaimers