Noah Edward and the Time Traveling Adventure Noah Edward discovers a way of traveling through time. Read about how Noah meets the de Ayus in the 18th Century.

Noah Edward and the Secret of VBS Noah Edward has a mission to stop an infamous art thief from stealing a painting of great value to his secret organisation VBS. Join Noah on his quest to discover the secret of VBS.

Noah Edward and the Haunted Manor Noah Edward and family travel to Wellington, New Zealand. They take up residence Antrim House, but find that they are not alone. 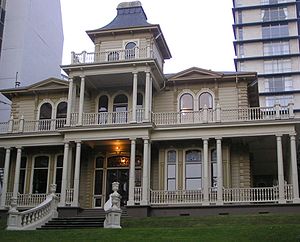 Noah Edward and the Chase for Vengeance Noah Edward's parents have died and he finds himself being chased by his evil former teacher Ms Momento-Mori. She chases him all around the world and he even finds himself in 18th Century London.

Noah Edward and Awful orphanage Child detective Noah Edward is living at Richard Seddon’s Home for Vulnerable Children, a horrible orphanage with a horrible owner. He goes back in time to stop the owner from taking over the world.

Noah Edward is the protagonist of the series. he works for VBS a secret organisation. and he hates his teacher Momento-Mori

Jane Leslie Momento-Mori she was born in 1986 and she died in 2017. The red coat that she wore was from her days in the British Redcoat army. She got a job as a teacher at a school in London. This was where she met Noah Edward. she always managed to find a reason to dislike people. For some reason she really began to hate Noah Edward. She organised a school camp for her class to Paris. At this school camp she decided to push a few of her students off the Eiffel Tower. Noah Edward managed to save the children. She was fired from her job after this.

Noah's Grandmother is a very posh lady that is obsessed with makeup and collects antiques. The only book in the series she is in is Noah Edward and the Chase for Vengeance.

she is member of the French court and the wife of Monsieur de Ayu an 18th century lord.

As of this edit, this article uses content from "The Noah Edward Book Series Wiki", which is licensed in a way that permits reuse under the Creative Commons Attribution-ShareAlike 3.0 Unported License, but not under the GFDL. All relevant terms must be followed.

As of this edit, this article uses content from "The Backstory Of Ms Momento-Mori", which is licensed in a way that permits reuse under the Creative Commons Attribution-ShareAlike 3.0 Unported License, but not under the GFDL. All relevant terms must be followed.

Retrieved from "https://en.everybodywiki.com/index.php?title=The_Noah_Edward_Book_Series&oldid=970443"
Category:
Hidden categories:
This page was last edited on 19 August 2020, at 12:37.
This page has been accessed 264 times.
Content is available under License CC BY-SA 3.0 unless otherwise noted.
Privacy policy
About EverybodyWiki Bios & Wiki
Disclaimers