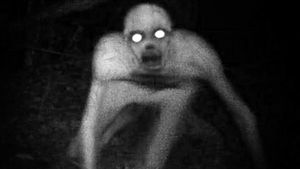 The Rake is a short horror film written by Kenneth Collins. With a total of 50 minutes in run time it was first screened on Enter Viral Media on November 11, 2011. The Rake is the first found footage film made by Enter Viral media and the most successful. It tells the story of three college graduates venturing into the forests of Washington and are never seen again. It is seen through the perspective of their camera, found by a mine excavator a year later and features the mythical cryptic

The Rake on IMDb

Retrieved from "https://en.everybodywiki.com/index.php?title=The_Rake&oldid=289756"
Categories:
This page was last edited on 13 January 2019, at 17:05.
This page has been accessed 309 times.
Content is available under License CC BY-SA 3.0 unless otherwise noted.
Privacy policy
About EverybodyWiki Bios & Wiki
Disclaimers
Mobile view