The group's debut album, The Wanted, was released on December 16, 2010[1][2] and combines a distinctive folk-roots-rock mashup that draws a great deal on artists that have influenced them such as Bob Dylan, Carter Family, Chuck Berry, and Emmylou Harris. The Wanted's music is often described as both honest and gritty, while at times is darkly haunting and fun.[3] The Wanted (album) has received more than 400,000 streams on Spotify[4] as of March 2021. The self-titled album features nine original tracks, along with five covers.

The group's follow up album, Strange Flight, was released on March 26, 2021 and was recorded at The Hangar (Latent Recordings) in Toronto with producer Michael Timmins of the Cowboy Junkies. Strange Flight also featured bassist Dan Mock and drummer Kyle Sullivan, from Jerry Leger’s band The Situation.[4] The album received positive coverage from prominent Canadian music publications including Roots Music Canada[3], Canadian Beats[5], and FYI Music News[6]; as well as international coverage from The Rocking Magpie[7], Americana UK[8], and Adobe & Teardrops[9].

Due to similarity in name with the British-Irish boy band, The Wanted, online algorithms have amalgamated data from both groups on many platforms. The combination of metrics has caused confusion for existing and potential fans of both groups.

In 2002 an advertisement was placed in Now Magazine to promote a music collective.[10] Richard Henderson and other Toronto musicians responded to the ad, and ended up bonding over a shared love of classic roots artists like Gram Parsons.[11]

In 2003 the SARs Pandemic began making its way around the world. Due to the severity of the outbreak in Toronto along with a member of the group working in health care, the collective was put on hold.[12] The group had played together for about a year, but did not perform publicly. Ultimately SARs dissipated, at which point a few of the original collective members discussed reuniting and began playing together once again.

The Wanted was officially established in 2004 as the group started to book live performances. The band included remaining collective members Henderson, Sandy Bell, and Vera Colley; along with Marc Fedak, David Novak, and guitarist David Norris. Jeff Rogers joined the group later on in 2004 and Natalie Rogers joined in 2005.

The Wanted started working on their first album in 2008. The album is a self-titled compilation of originals written by different band members, along with covers of tracks that the group regularly played live. The album was released on December 16th, 2010 to a sold-out crowd at Hugh's Room in Downtown Toronto. At the time of recording and release the group comprised the three current members, along with Bell and Dave Lang on acoustic bass.

Over several years the group promoted their first album with live performances at festivals and award shows taking the stage as both a trio consisting of Henderson, Rogers, and Rogers; as well as a five-piece with Henderson, Rogers, Rogers, Lang, and Richard (Rico) Stern on Cajón and drums. Eventually the trio became the core members.

In 2017 The Wanted took the stage at the Boot Hill Country Jamboree in Bothwell, Ontario. The festival hosted performances from a number of country acts including Beverley Mahood, Jason Blaine , and Aaron Pritchett.[13] That same year Rico Stern left the group and Ben Graffam joined taking his place on drums.

In 2018 The Wanted played the Mariposa Folk Festival alongside more than 100 other folk performers that included Walk off the Earth, Buffy Sainte-Marie, Larkin Poe, and Alan Doyle.[14] The folk festival added The Wanted to a curated CD compilation of selected artists that performed that year. The group's original song 'On Your Way Out' was chosen for the album.[15][16] In the CD's liner notes the festival noted the song is a sharp witted and cheeky tune about aligning the balance between a strong willed woman and her partner.[17]

The group started recording their second album, Strange Flight, in 2019 at The Hangar recording studio in Toronto. The release was initially scheduled for 2020 but became delayed due to the COVID-19 pandemic. The health crisis also caused the group to cancel all tours and promotional performances. Instead the band moved to an online release approach to align with how other independent artist were marketing their work during that time. On March 26th, 2021 the group released the album as both a physical compact disc and on digital streaming platforms.[18] The album consists of eight originals tracks, one cover, and a traditional work in their own style. 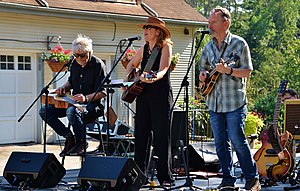 The Wanted have performed across Canada. In addition to the notable performances listed below, from 2004 to the present, the group has performed frequently at folk and roots clubs including The Tranzac Club, The Cameron House, The Gladstone, The Dakota Tavern, The Moonshine Café, The Local Pub, and Dora Keogh’s.

Share
Retrieved from "https://en.everybodywiki.com/index.php?title=The_Wanted_(Canadian_band)&oldid=1827937"
Category:
Hidden category:
This page was last edited on 24 July 2021, at 11:55.
Content is available under License CC BY-SA 3.0 unless otherwise noted.
This page has been accessed 434 times.
Privacy policy
About EverybodyWiki Bios & Wiki
Disclaimers