Tommy Demenkoff (born January 31, 1952) is an American stage, television and film actor, director and musician who has worked in New York, Los Angeles, South America, and Europe. He is an award-winning teacher, Outreach Director, and Arts Education Activist. His work designing and delivering arts programs and classes is well known in correctional facilities, including Rikers Island in New York and Twin Towers Correctional Facility in Los Angeles, therapeutic communities including Phoenix House and large city school systems like the New York City Department of Education where he successfully created an integrated approach to teaching literacy through playwriting in all five boroughs of the city. With over 50 years of experience as an artist in a variety of disciplines, he continues to focus on building communities of artists dedicated to serving humanity. Recent projects which best reflect the vast scope of his work include Teatro de Vieques on the island of Vieques, Puerto Rico, where he partnered with a local non-profit organization, Reach for Success, with a goal of helping teenagers on the island discover their voices and their hearts through their own talent and abundant passion by providing the necessary support for the realization of a summer arts immersion experience. Also partnering with Five Keys Charter School inside three of the jails they serve through their relationship with the Los Angeles Sheriff's Department and Education Based Incarceration (E.B.I.). His presence on the Commissioner's Adolescent Advisory Board, as the voice of the arts programming issues related to serving youthful offenders in the custody of The New York City Department of Correction reflects the impact of his career moving from Actor to Activist to Arts Education Activist. Leading a national conversation through the efforts of Theatre Communications Group (TCG), in a webinar entitled "Models of Activist Theatre", his work and his vision cast a bold spotlight on a movement that sees organizations and artists who share this vision joining arms and marching forward together. Demenkoff's personal life mission as an Arts Education Activist is to build communities of artists for the purpose of providing individuals and groups who have little or no access to the arts with an artistic home. He calls this effort a humanitarian response.[1]

In 1973 he had a small role in Julius Caesar at the Theatre at Monmouth in Monmouth, Maine.[2]

Demenkoff graduated from Ithaca College in 1974 and made his professional New York stage debut in the original New York City productions of Godspell at the Promenade Theatre alongside Victor Garber, Don Scadino, and Lamar Alford, Eric Blau's I Paid My Dues alongside Joe Morton at the Astor Place Theatre,[3][4] and Grease at the Royale Theatre (now the Bernard B. Jacobs Theatre) alongside Treat Williams, Robin Lamont, and Marilu Henner.[5] He made his professional Los Angeles stage debut as a member of the original cast of Luis Valdez's Zoot Suit alongside Edward James Olmos, Daniel Valdez, Lupe Ontiveros, Enrique Castillo, Evelina Fernandez, Charles Aidman, and Tony Plana at the Mark Taper Forum.[6] The show later transferred to the Aquarius Theatre in Hollywood. He also appeared on stage in Los Angeles as Kenickie in Grease at the Long Beach Civic Light Opera alongside Donna Pescow, Barry Williams, Belinda Carlisle, and Casey Kasem.[7]

His career in the Los Angeles music scene during the 1980s included live performances at The Troubadour, Bla Bla Cafe,[9] Madame Wongs - East and West, The Blue Lagoon, and The Relic House, and various recording projects including with groups Legion with Ray Kenetsky and Rocket Ritchotte, Deuce with Ron Abel, and Demenkoff with Miles Joseph, Kirk Arthur, and Ronnie Lee Cunningham, the role of Romeo on the rock opera recording of Starcrossed Lovers opposite Shelby Flint as Juliet, and the soundtrack for video arcade motion picture Joysticks starring Joe Don Baker.[10] He also co-wrote several of the songs for the television series The Music Shoppe, starring Nia Peeples and Gary Crosby, while also guest starring as a famous rock musician in one episode.

After returning to New York City in the late 1990s, Demenkoff performed in a string of leading roles in Macbeth and A Midsummer Night's Dream for Hudson Warehouse,[11] Stephen Bittrich's The Way, The Truth, The Life,[12][13] Bryan Dykstra's Mick Just Shrugs, Ed Manning's Mutant Sex Party with Erik Van Wyck,[14][15] Renee Flemings' Legend, and Neil Olson's Icon with Hamilton Clancy and Kelly Grant and directed by Richard Harden, for The Drilling CompaNY, and An Evening With Horton Foote and The Winter's Tale directed by John Basil for the American Globe Theatre.[16]

Demenkoff also performed in numerous regional theatre and touring productions, including Just So at North Shore Music Theatre with Christian Borle, Art and My Fair Lady at the Cape Fear Regional Theatre, Anita Bryant Died for Your Sins and Dirty Blonde at Florida Studio Theatre,[17] Oliver! at Mill Mountain Theatre, Gifts of the Magi at Capital Repertory, Rumors directed by David Ringwood at County Players,[18] 1776 at Sacramento Civic Light Opera[19] and 90 Miles Off-Broadway, Silver Dollar and George M! at Goodspeed Opera House, Dreamhouse at Centenary Stage,[20] Oklahoma! at Galveston Outdoor Musicals, Company with Norm Lewis and Donna McKecknie at the Helen Hayes Theatre in Nyack, New York, Music Man, Phantom of the Opera, Kiss Me Kate, and Guys and Dolls at West Virginia Public Theatre, and a tour of Phantom of the Opera which played in Bogotá, Colombia, and São Paulo, Brazil.

As a director, his work has been seen regionally with productions of Aaron Sorkin's A Few Good Men at Shadowland Theatre, Breaking the Code at Theatre of Woodstock, Jane Martin's Talking With... and Peter Shaffer's Equus at Wallkill River Repertory; and in New York City with productions of Anton Chekhov's The Seagull for Hudson Warehouse,[31] William Shakespeare's Romeo and Juliet for Shakespeare in the Parking Lot, and a series of new works in development at The Drilling CompaNY including Suzanne Bradbeer's Fear and Loathing on the Nile, and Eric Sanders' Bong Hits 4 Jesus. He has produced and directed several video projects, including ADD: Stepping Out of the Dark, a resource tool for parents and educators facing the issues and challenges of Attention Deficit Disorder; Vladimir Feltsman, chronicling the flight of the world renowned Russian Concert Pianist from the Soviet Union to his professorship at the State University of New York at New Paltz and a new life of teaching and touring the world; and direction of the television documentary, The Children of Izieu,[32][33] about the murder of 44 children during WWII and the hunt for their killer, Klaus Barbie, the butcher of Leon, featuring rare interviews with veteran Nazi hunters Beate Klarsfield and her husband Serge Klarsfield, which won international film festival honors at the Houston Film Festival and the Mill Valley Film Festival, and is distributed by the National Center for Jewish Film at Brandeis University.

He taught acting for two years at Cornell University's Schwartz Center for the Performing Arts as a Resident Professional Teaching Associate and appeared in leading roles in their main stage productions of Mark Blitzstein's Cradle Will Rock, William Shakespeare's Othello, Mary Zimmerman's Metamorphoses, Arthur Miller's All My Sons, David Feldshuh's Little Women, Thornton Wilder's The Skin of Our Teeth, Jerome Lawrence and Robert Edwin Lee's Inherit the Wind, as well as co-writing the musical score and also performing in the stage debut of an original Shakespeare mash-up musical Beat Box Bard with performance artist and beatbox musician Adam Matta. He also contributed to Cornell University's national outreach efforts, teaching acting and playwriting classes in Chicago for two summers at The Latin School in support of the non-profit education program High Jump. While at Cornell University, a unique opportunity was granted to him as he was selected to spend one year while teaching on campus, to live with 30 students as their Faculty Advisor in residence at the Telluride Association House on the Cornell Campus, where he also participated in daily house functions and discourse, while providing a series of theatre arts programs, and filled trips and events for the enrichment of the students throughout the academic year. He has served as a Master Teaching Artist for one year with Florida Studio Theatre, provided actor training for 3D animators while they were being groomed for careers with Pixar and Disney at the Ringling College of Art and Design in Sarasota, FL,[34] taught communications, and was the assistant to the director of instructional media at the State University of New York at New Paltz and co-directed a theatre arts workshop at Fishkill Correctional Facility through Marist College. 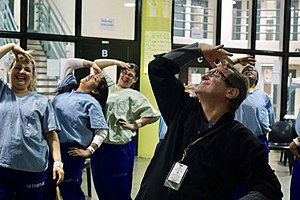 As Director of Education at City Lights Youth Theatre, he designed and delivered the popular literacy curriculum called "Write a Play Today!" using an innovative approach to in-school playwriting projects which matched daily academic curriculum maps in over 100 New York City classrooms per year. Launching PossibleArts Theatre Project in New York City,[35] he served as Artistic Director, developing theatre projects for residents receiving treatment at the nationally recognized therapeutic communities of Odyssey House[36][37][38][39][40][41] and Phoenix House, in addition to the high school for youthful offenders on New York's Rikers Island, Horizon Academy; the alternative to incarceration non-profit GOSO (Getting Out & Staying Out);[42][43] and Good Shepard Services in the Bronx. His Phoenix House partnership grew to embrace the New York and Los Angeles workshops for the West Side Story Project, which was a program developed by Criminal Justice Researcher Anna Laszlo and former Seattle Police Chief Gil Kerlikowske. The two-year project brought together former gang members and police officers for the purpose of taking a theatre class based on the music and lyrics of Leonard Bernstein and Stephen Sondheim's iconic musical West Side Story.[44][45][46][47][48] 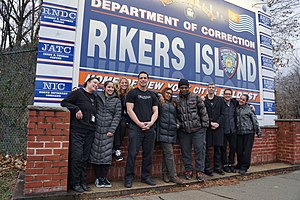 Demenkoff was recruited by the Stella Adler Studio of Acting and their sister campus the Art of Acting Studio in Los Angeles in 2012 to serve as the Director of Outreach.[49][50] At the Stella Adler Studio, he led their teams of Actor Warriors: World Class Instructors and Adler Ambassadors (alumni & student volunteers) in providing free actor training for over 1500 students per week at the studio, in public and alternative schools, community centers, drug and alcohol recovery programs,[51] and correctional facilities, including eight jails on Rikers Island[52][53][54][55][56][57] and the Manhattan Detention Center Complex in New York City and Twin Towers Correctional Facility,[58] Century Regional Detention Center, and the Pitchess Detention Center in Los Angeles.[59][60][61][62] He sits on the Adolescent Advisory Board as the voice of arts for the New York City Department of Correction[63] and travels every summer to Vieques, Puerto Rico, to run the program he founded for teenagers, Teatro de Vieques, a summer arts immersion experience in partnership with the local non-profit Reach for Success.[64][65][66][67][68][69]

Demenkoff is married to Broadway actress Kelly Jeanne Grant, who has appeared in Hal Prince's Showboat, John Doyle's Tony Award-winning revival of Stephen Sondheim's Company,[70] Andrew Lloyd Webber's Phantom of the Opera, and the HBO series Crashing. They have one daughter. Demenkoff also has two children from a previous marriage, a props supervisor in New York City, and a sculptor in New Paltz, NY.

Demenkoff was awarded the 2016 Richard Haden Award for Excellence in Theatre Arts Education and Outreach by Hudson Warehouse.

Retrieved from "https://en.everybodywiki.com/index.php?title=Tommy_Demenkoff&oldid=973962"
Categories:
Hidden categories:
This page was last edited on 20 August 2020, at 12:48.
This page has been accessed 214 times.
Content is available under License CC BY-SA 3.0 unless otherwise noted.
Privacy policy
About EverybodyWiki Bios & Wiki
Disclaimers