Nickelodeon Studios was a production studio and theme park attraction ran by the television network Nickelodeon at Universal Studios Florida.

Opening on June 7, 1990, as The First World Headquarters for Kids, the studio attracted young tourists as contestants and audience members for Nickelodeon's live-action programming. At its peak, the studio employed 400 people and was the largest production studio in Florida, bringing $110 million in business to the state by 1994.

The studio closed permanently on April 30, 2005, after much of Nickelodeon's production had moved to Nickelodeon on Sunset. Nickelodeon Studios ended its run having produced over 2,000 episodes of original programming. 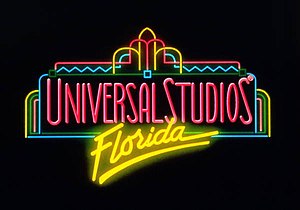 In November 1988, Nickelodeon contracted space within the soon to be built Universal Studios Florida for its first production studio.[1] Universal had determined through market research that a working studio was crucial in attracting guests to a movie themed park, and they offered Nickelodeon a sweetheart deal to supply that production.[2][3] The promise of a custom-built studio at no expense, coupled with rent-free production, lured Nickelodeon away from negotiating with Disney-MGM Studios.[4] The contract stipulated that Nickelodeon promote Universal Studios Florida on-air 1,000 times per year, while also broadcasting the park's television commercials.[1]

Turner Construction Company began erecting two 16,500 sq ft (1,530 m2) soundstages (Stages 18 and 19) and an adjacent 40,000 sq ft (3,700 m2) video production facility within the Production Central area of the park in 1989.[5] The exterior of the facility was designed by network production designer Byron Taylor, and the interior was designed by network art director Don St. Mars.[6][7] Viacom senior vice president Scott Davis would supervise the design and construction of the complex, and he was later named the first general manager of Nickelodeon Studios.[8]

Super Sloppy Double Dare in April 1989 and Think Fast in January 1990 were the first Nickelodeon productions filmed at Universal Studios Florida, and they were shot on the 21,000 sq ft (2,000 m2) Stage 21 while Nickelodeon Studios was still being constructed.[9][10] Like other Nickelodeon game shows, both programs were previously filmed at WHYY-TV in Philadelphia.[11] Nickelodeon's live-action productions had traditionally been shot on rented soundstages in multiple cities, which was not cost-effective and limited the network's growth.[3] 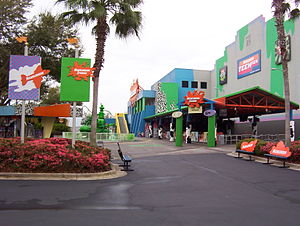 Daily tours were given of the studio, starting with a queue area outside Stage 18 that led into the video production building. The 45-minute tours took park guests upstairs through the control room, through a viewing area that allowed glimpses of Stages 18 and 19, then downstairs through the wardrobe department and Gak Kitchen, with the tour concluding in a large audition room.[14] While game shows were often shot 5 days a week while in production, sitcoms such as Welcome Freshmen would rehearse during the week and only shoot on weekends. This became problematic, as Nickelodeon's contract with Universal stipulated that their guests would be able to witness shows being filmed, "seven days a week, 52 weeks a year, during all hours of the tour’s operation".[4] To remedy this, the audition room was renamed Stage 17 and began hosting Game Lab, a mock game show at the end of every tour that culminated with one of the guests getting slimed.[15]

Nickelodeon unveiled its Slime Geyser (also known as the Gak Geyser) in front of the studio on October 27, 1990.[16] Russell Johnson, famous for playing The Professor on Gilligan's Island, appeared at the unveiling ceremony.[17] The 17-foot high fountain would "erupt" with green colored water every 10 minutes.[18] The network subsequently used a recording of the Geyser erupting as the sign-on for their broadcasting day.

On April 30, 1992, the Nickelodeon Time Capsule was buried near the Slime Geyser. The burial ceremony was broadcast live on Nickelodeon and hosted by Mike O'Malley of Get the Picture and Joey Lawrence of Blossom, with an appearance by Dr. Emmett Brown of Back to the Future: The Ride.[19] It contains items deemed important to the children of 1992 as voted upon by Nickelodeon viewers. These items included a Barbie doll, baseball, books (comic book, endangered species book, history book, phone book, TV Guide and World Atlas), bubble gum, CDs (MC Hammer and Michael Jackson), hat featuring the catchphrase of Joey Lawrence, news reports (1991 Soviet coup d'état attempt, Dissolution of the Soviet Union, Epidemiology of HIV/AIDS and Operation Desert Storm), Nickelodeon Gak, Nickelodeon Magazine, Nintendo Game Boy, pencils, photos of things too big to fit inside (bicycles, cars, celebrities, planes, politicians and trains), piece of the Berlin Wall, Reebok Pump sneakers, Rollerblades, skateboard, t-shirt featuring the Nicktoons characters Ren and Stimpy, Twinkies, and VHS movies (Back to the Future and Home Alone). The final items put in the capsule were a tape of the event itself and the camcorder used to record it.[20]

Roundhouse moved to CBS Studio Center in Los Angeles for the filming of its second season in 1993.[21] The show's unionized cast, crew and musicians were unhappy that working in Orlando deprived them of residuals.[22] As a right-to-work state, Florida had attracted producers looking to avoid union costs and regulations that were prevalent in California.[23]

An episode of Weinerville shot on February 14, 1994, marked the 1,000th episode of live-action programming filmed at the studio since its opening. Nickelodeon Studios had at that point brought $110 million in business to Florida, and regularly employed between 280 and 330 people on a weekly basis.[24]

Rugrats on the Hollywood Walk of Fame

Universal Studios Florida trailed Walt Disney World in attendance at the end of 1994, with Universal hosting 7.7 million guests that year compared with Disney's 28.9 million.[25] To stay competitive, Universal broke ground on Islands of Adventure in 1995, recommitting itself primarily as a theme park with the $2 billion expansion.[26] Universal by then saw the production studio aspect of the park as secondary to its thrill rides, shortening their marketing slogan from See the Stars. Ride the Movies to Ride the Movies. The number of new productions began decreasing not only at Nickelodeon Studios, but at Universal Studios Florida proper and the competing Disney-MGM Studios.

Rugrats in 1995 had become an unexpected success in reruns, causing Nickelodeon to heavily invest in animation and producing new episodes of the show.[27] Nickelodeon's in-house Nicktoons animation at the point was produced at Games Animation in Los Angeles. Albie Hecht, the network's President of Film and Entertainment, met with his in-house animators in 1996 to solicit opinions on what a new animation studio should look like.[28] That same year, producers Mike Tollin and Brian Robbins requested Nickelodeon move filming of their hit live-action show All That from Orlando to Los Angeles so they wouldn't have to leave home for production. The network obliged, and the third season of All That was filmed on a rented soundstage at Paramount Pictures while Nickelodeon searched for a permanent Hollywood studio.

I can't think of another reason to be there. The weather stinks. Every single day I was dealing with thunderstorms. It's an inhospitable place to shoot film and TV shows. And there's not a tremendous talent pool to work with there.[29]

The Mystery Files of Shelby Woo was shut down by a labor strike in August 1997 when the production switched from videotape to film stock.[32] Movies and television shows shot on film stock were regulated by the International Alliance of Theatrical Stage Employees. The show's producer, Alan Goodman, would move production of The Mystery Files of Shelby Woo to Montreal for the filming of its final season.[33] Canada was attracting American productions at the time with tax incentives and a favorable exchange rate.[34]

The studio began laying off employees in March 2001 since a majority of Nickelodeon's closed-set productions had moved to California, game shows were no longer being produced, and the network's highest rated programming was animated.[38] The studio auctioned off its remaining props in storage at their offsite scene shop in June 2001.[39] The final program taped at the facility was Nickelodeon Splat!, which aired live on August 17, 2004. The studio closed permanently on April 30, 2005.[40]

Clarissa Explains It All, 1991

Nickelodeon Studios was responsible for producing over 2,000 episodes of original, live-action programming for Nickelodeon.[41] The facility employed 400 people at its peak, at which point it was the largest production studio in Florida.[42]

Nickelodeon returned to film My Family's Got Guts in 2008, using some of the former Nickelodeon Studios facilities including the green room.[54] Training was in Stage 19, and the actual production was filmed nearby on Stages 23 and 24.

The complex became popular for urban exploration, as Universal left much of the original Nickelodeon branding intact for years after the studio closed. In 2012, YouTube personality adamthewoo gained access to Stage 19 and the upper floors of the video production building, documenting vastly untouched murals and decor from the heyday of the studios.[55] A majority of these remnants have since been removed.

Stage 19 and the video production building are now home to Bally Sports Florida and its sister network, Bally Sports Sun.[56]

This is a list of programs that were filmed at the studio by Nickelodeon.[57]

Share
Retrieved from "https://en.everybodywiki.com/index.php?title=Nickelodeon_Studios&oldid=2000800"
Categories:
Hidden categories:
This page was last edited on 2 September 2021, at 21:21.
Content is available under License CC BY-SA 3.0 unless otherwise noted.
This page has been accessed 460 times.
Privacy policy
About EverybodyWiki Bios & Wiki
Disclaimers