Tropical Depression Ten was a short-lived and weak tropical cyclone that was the tenth system of the record-breaking 2005 Atlantic hurricane season. It formed on August 13 from a tropical wave that emerged from the west coast of Africa on August 8. As a result of strong wind shear, the depression remained weak and did not strengthen beyond tropical depression status. It degenerated into a remnant low on August 14, but its remnants partially contributed to the formation of Hurricane Katrina, after merging with a tropical wave on August 19. Thus, it is often referred to as "the precursor to Katrina". The cyclone had no effect on land and did not directly result in any fatalities or damage. 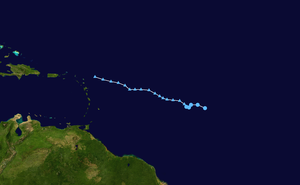 On August 8, a tropical wave emerged from the west coast of Africa and entered the Atlantic Ocean. Tracking toward the west, the depression began to exhibit signs of convective organization on August 11. The system continued to develop, and it is estimated that Tropical Depression Ten formed at 1200 UTC on August 13, located about 1,600 miles (2,600 km) east of Barbados.[1] Upon its designation, the depression consisted of a large area of thunderstorm activity, with curved banding features and expanding outflow. The environmental conditions were predicted to quickly become unfavorable, however.[2] The depression moved erratically and slowly towards the west, and wind shear inhibited any significant intensification. Late on August 13, it was "beginning to look like Irene-junior as it undergoes southwesterly mid-level shear beneath the otherwise favorable upper-level outflow pattern".[3] The wind shear was expected to relent within 48 hours, prompting some forecast models to suggest the depression would eventually attain hurricane status.[3]

By early August 14, the shear had substantially disrupted the storm, leaving the low-level center of circulation exposed from the area of convection, which was also deteriorating. After meandering, the storm began to move westward. Forecasters expected it to resume a northwestward track as high pressure to the south of Bermuda was forecast to weaken and another high was predicted to form southwest of the Azores.[4] By 1800 UTC on August 14, the strong shear had further weakened the storm, and it no longer met the criteria for a tropical cyclone. It degenerated into a remnant low, and the National Hurricane Center issued their final advisory on the cyclone. Moving westward, it occasionally produced bursts of convective activity, before merging with another tropical wave on August 19.[1]

Because Tropical Depression Ten never approached land as a tropical cyclone, no tropical cyclone watches and warnings were issued. No effects, damages, or fatalities were reported, and no ships reported tropical storm-force winds in association with the depression. The system did not attain tropical storm status and was not given a name by the National Hurricane Center.[1] The storm partially contributed to the formation of Hurricane Katrina, which became a Category 5 hurricane on the Saffir–Simpson Hurricane Scale and made landfall in Louisiana and Mississippi, causing catastrophic damage, becoming one of the five deadliest hurricanes in the history of the United States.[8]

This audio file was created from a revision of the article "Tropical Depression Ten (2005)" dated 2011-08-06, and does not reflect subsequent edits to the article. (Audio help)
More spoken articles

Retrieved from "https://en.everybodywiki.com/index.php?title=Tropical_Depression_Ten_(2005)&oldid=975346"
Categories:
Hidden categories:
This page was last edited on 20 August 2020, at 21:58.
This page has been accessed 307 times.
Content is available under License CC BY-SA 3.0 unless otherwise noted.
Privacy policy
About EverybodyWiki Bios & Wiki
Disclaimers