As an actor, Sivan portrayed the younger version of the titular character in the 2009 X-Men film X-Men Origins: Wolverine and starred as the title character in the Spud film trilogy. As a YouTube personality, Sivan used to upload video blogs regularly and, as of 2016, has over 4 million subscribers and over 241 million total views.[9] His video, "The 'Boyfriend' Tag", with fellow vlogger Tyler Oakley earned them a Teen Choice Award in the "Choice Web Collaboration" category. In October 2014, Time named Sivan as one of the "25 Most Influential Teens of 2014".[10] In 2018, he received a Golden Globe nomination for Best Original Song for "Revelation", from the film Boy Erased, in which he also had a supporting acting role.

Sivan was born in Johannesburg, South Africa,[11][12] the son of Laurelle and Shaun Mellet.[13] His family moved to Australia when he was two years old due to rising crime in South Africa.[14] Sivan grew up living in Perth, Western Australia with his parents and three siblings Steele, Tyde and Sage. His father is a real estate agent and his mother is a homemaker.[14] He is Jewish;[15][16] his father was born to a Jewish family and his mother converted to Judaism.[17][18] Sivan attended Carmel School, a private Modern Orthodox school, until 2009 when he started distance education.[19]

Sivan's musical career started when he sang at the 2006, 2007 and 2008 Channel Seven Perth Telethon.[20][21] His 2006 performance included a duet with Australian Idol winner Guy Sebastian.[21] Sivan made it to the finals of StarSearch 2007.[20] His debut EP, Dare to Dream, was released in June 2007. In February 2010, Sivan opened "We Are the World 25 for Haiti (YouTube Edition)", the collaborative music charity video produced by Lisa Lavie to help raise money for the victims of the 2010 Haiti earthquake.[22] His most recent hit "Youth", from his Blue Neighbourhood album that he released in 2015 reached number 23 in the billboard Top 40 single.[23]

On 5 June 2013, Sivan was signed to EMI Australia, a Universal Music Australia label, but kept it a secret until a year later. On 15 August 2014 he released a five-song EP entitled TRXYE, led by its first single "Happy Little Pill", which was released on 25 July 2014.[24] TRXYE debuted at No. 1 on iTunes in over 55 countries.[25] The album debuted at No. 5 on the Billboard 200 the following week, scoring Sivan his first Top 10 album.[26] "Happy Little Pill" peaked at number 10 on the ARIA Singles Chart and was certified gold by the Australian Recording Industry Association for shipments exceeding 35,000 copies.[27] Sivan released his second major-label EP, Wild, on 4 September 2015. The EP was supported by a music video trilogy entitled Blue Neighbourhood, comprising the three songs "Wild", "Fools" and "Talk Me Down" and released from September 2015 to December 2015. Additionally, the EP served as an introduction to his album Blue Neighbourhood,[28] which was released on 4 December 2015.[7] Sivan supported his debut studio album Blue Neighbourhood and his EP Wild with his first tour, 2015's Troye Sivan Live.[29] Sivan further supported his debut studio album with 2016's Blue Neighbourhood Tour and Suburbia Tour. On 26 May 2017, Troye collaborated with Martin Garrix to produce the song called There for You.[30] 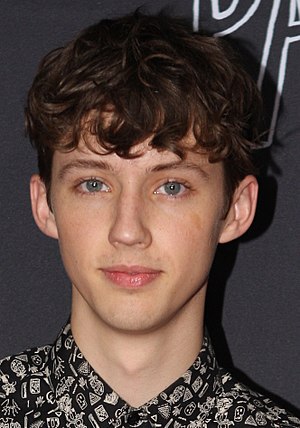 On 10 January 2018, Sivan released the single "My My My!", along with an accompanying music video.[31] He confirmed that his second album was inspired by his boyfriend, an American model named Jacob Bixenman.[32] The song is a notable contrast from his earlier work, with Pitchfork commenting on his "assured" vocals and NPR Music describing it as "an infectious celebration of sexual desire".[31] NPR Music also notes the significance of the song and music video displaying confidence in Sivan's sexuality, writing "[i]t's not every day you see a young, skinny, queer kid get to be completely himself in a music video, and Sivan makes us want to dance along with him."[31] Sivan's first live performance of the song was on 20 January as the musical guest on Saturday Night Live in an episode hosted by Jessica Chastain.[33] Sivan later confirmed that his new album would feature a collaboration with long-time friend Ariana Grande,[34] titled "Dance to This".[35] "Bloom" was released as the third single on 2 May 2018, following "The Good Side".[36] That month, he announced that his second studio album is titled Bloom, while accompanying Taylor Swift as a guest performer at her concert in Pasadena during her Reputation Stadium Tour. The album was released on 31 August 2018.[37][38][39][40] The album's final pre-release track, "Animal", was launched on August 9, 2018.[41][42] In 2018, Sivan received a Golden Globe nomination for Best Original Song for "Revelation", which he recorded and co-wrote for the film Boy Erased.[43] He was also shortlisted for an Academy Award for the song.[44]

Sivan's music videos frequently feature LGBTQ relationships between the characters. TRXYE's trilogy followed the narrative of two gay teenagers in a secret relationship while "Wild" featured Sivan with another male love interest. His music video for "Heaven ft. Betty Who" features footage of historical LGBTQ movements and couples, as well as sensual shots with him and an anonymous man with the running tagline "Without losing a piece of me, how do I get to Heaven?" and "If I'm losing a piece of me, maybe I don't want Heaven". The singer says these portrayals are important to him, especially when he considers his younger life when he remembers "such vivid memories of the few times I saw any type of LGBTQ relationship on TV or in music videos".[45]

In 2007, Sivan starred as Oliver Twist in a production of Oliver! at the Regal Theatre.[21] In 2008, Sivan was cast in a West Australian short film, Betrand the Terrible.[46] In February 2008, Sivan was cast as young James Howlett in X-Men Origins: Wolverine. Sivan got the part after videos of his telethon performance were posted on YouTube, catching the attention of a Hollywood agent who contacted Sivan and asked him to send in an audition tape.[21] Though Kodi Smit-McPhee was already cast for this role, he was unable to be a part of the film, due to his other film, The Road.[47] In July 2009, he auditioned successfully for the lead role in Spud, a film adaptation of the 2005 novel by South African author John van de Ruit.[48] Filming took place in South Africa from early March to mid-April 2010.[49][50] The film was released in South Africa on 3 December 2010 and was later nominated for six SAFTAs, including a Best Lead Actor in a Feature Film nomination for Sivan.[51]

Sivan appeared in the West Australian season of Samuel Beckett's absurdist play Waiting for Godot which opened on 28 May 2010.[52] Sivan shared the role of "Boy" with Craig Hyde-Smith, alternating nights.[53] In June 2012, Sivan returned to South Africa to film Spud 2: The Madness Continues, which was released in South Africa on 21 June 2013. Sivan also starred in the third film in the series, Spud 3: Learning to Fly, released on 28 November 2014.

Sivan co-starred in the coming of age/coming out film Boy Erased (2018), opposite Lucas Hedges, Xavier Dolan, and Nicole Kidman.[54]

In September 2012, Sivan began creating video blogs on the video sharing site YouTube, after having only sung on the site since 2007. At the time of posting his first vlog, Sivan had accumulated 27,000 subscribers in his five years since joining YouTube on 1 October 2007. As of April 2016, Sivan had over 4 million subscribers and over 243 million total views across his YouTube videos.[9] His YouTube channel is the third most subscribed channel in Australia, after HowToBasic and Planet Dolan.[55]

A YouTube video Sivan made with fellow YouTuber Tyler Oakley titled "The 'Boyfriend' Tag" earned them a Teen Choice Award in the "Choice Web Collaboration" category.[56]

Sivan is openly gay. He came out publicly via a YouTube video on 7 August 2013. He came out to his family three years before his video was released.[67] He lives with a mild form of Marfan syndrome.[68] Sivan is in a relationship with model Jacob Bixenman.[69] He resides in Los Angeles.[70]

This audio file was created from a revision of the article "Troye Sivan" dated 2013-04-21, and does not reflect subsequent edits to the article. (Audio help)
More spoken articles

Share
Retrieved from "https://en.everybodywiki.com/index.php?title=Troye_Sivan&oldid=271545"
Categories:
Hidden categories:
This page was last edited on 26 December 2018, at 08:29.
Content is available under License CC BY-SA 3.0 unless otherwise noted.
This page has been accessed 2,580 times.
Privacy policy
About EverybodyWiki Bios & Wiki
Disclaimers