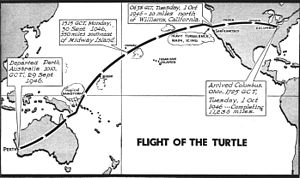 The Truculent Turtle is a Lockheed P2V-1 Neptune that was flown in 1946 by United States Navy crew on a record-setting from Perth, Australia, to Columbus, Ohio, that set an unrefueled long distance record.

The third production P2V-1 was chosen for a record-setting mission, ostensibly to test crew endurance and long-range navigation but also for publicity purposes: to display the capabilities of the US Navy's latest patrol bomber. Its nickname was The Turtle, which was painted on the aircraft's nose (along with a cartoon of a turtle smoking a pipe pedaling a device attached to a propeller). However, in press releases immediately before the flight, the US Navy referred to it as "The Truculent Turtle".[1]

Loaded with fuel in extra tanks fitted in practically every spare space in the aircraft, "The Turtle" set out from Perth, Australia to the United States. With a crew of four (and a nine-month-old gray kangaroo, a gift from Australia for the National Zoo in Washington, D.C.) the aircraft set off on 9 September 1946, with a RATO (rocket-assisted takeoff). 2 1/2 days (55h, 18m) later, "The Turtle" touched down in Columbus, Ohio, 11,236.6 miles (18,083.6 kilometres) from its starting point. It was the longest unrefueled flight made to that point beating the unofficial record held by the Japanese who had made a 10,212 miles (16,435 kilometres) flight in a Tachikawa Ki-77. This would stand as the absolute unrefueled distance record until 1962 (beaten by a USAF Boeing B-52 Stratofortress), and would remain as a piston-engined record until 1986 when Dick Rutan's Voyager would break it in the process of circumnavigating the globe. "The Turtle" is preserved at the National Naval Aviation Museum at NAS Pensacola.

Retrieved from "https://en.everybodywiki.com/index.php?title=Truculent_Turtle&oldid=1828442"
Hidden categories:
This page was last edited on 24 July 2021, at 21:39.
This page has been accessed 258 times.
Content is available under License CC BY-SA 3.0 unless otherwise noted.
Privacy policy
About EverybodyWiki Bios & Wiki
Disclaimers