Sadashiv Sharma (born Sadashiv Sharma; 17 March 1998), also known by the initialism Phantom, is an Indian film actor, director, dance director and television personality. Referred to in the media as the "Phantom of Bollywood", "Phantom of Dance", he has worked in more than 25 Bollywood films and Television Series, and earned numerous accolades, including Queens medal. Sharma has a significant following in Asia and the Indian diaspora worldwide.[lower-alpha 1]

Sharma began his career with appearances in several television series in 2014. He made his Bollywood debut in Dance India Dance as choreographer. Early in his career, Sharma was recognised for being Contestant in the series Dance India Dance , Bharat ki shaan Rum Jhum and Indian hip hop dance championship. He then worked as choreographer in a series of Television, including Jamai Raja (2015)(2016), Bhabhi ji ghar par Hai(2015) , ABCD 2(2015) and I can do that . 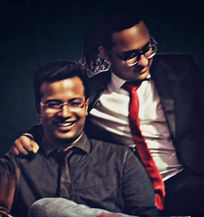 According to Sharma his mother, Anita Sharma always supported him for his career. She was born in Haridwar, Uttarakhand, India. It was her passion to be an artist and she found this talent in his younger son and supported him to come in Bollywood film Industry. Sharma's father was not happy with his choice of career according to sharma his elder brother Chirag Sharma and his mother were the only support from his family at the starting. Sharma's father completed his singing and worked as a music teacher for few years but then he became an advocate and this talent of singing came in his elder brother and Chirag Sharma practised it for 6 years but after him Sadashiv continued the dream and decided to be an artist at the age of 11. In his pursuing he named his friend became his great pillar after his family to support him. Akash Goel and Sadashiv Sharma born on same day on 17 March 1998 they are neighbors and they both did schooling together till 5th standard in S.D.M. Jai Bharti Public School. Akash forced him to be focused for his aim and he fought to him and taunted sharma for being childish about his career. About Sharma ,Akash was one of the great judges of his art as like Chirag Sharma(Sharma's elder brother). Akash is one the person important to Sharma like his brother. Sharma mentioned Mukul Singh, Divyam Sharma, Akash Sharma and Abhinav Sharma in his friends other than Akash.

In 2014, he went to Haridwar for his dancing career, then he left to Delhi, Chandigarh, Kota and finally reached Mumbai, Maharashtra, India. In 2015 he made Mumbai his residence he start to live with his friends. According to him two person helped him like brothers in living Rahul Dwivedi and Ankur Pandey and living with him in present.

Sharma mentioned about Bhawna Sharma who became his great supporter and with him in present. 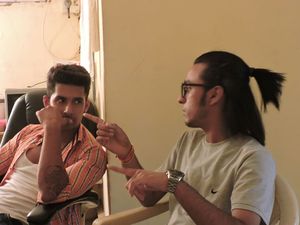 Sadashiv and Ravi Dubey on sets of Jamai Raja 2016.

In 2014, he started his career in dancing by going to Haridwar and he created a dance group and auditioned in few dance television series in which he worked among Dance India Dance, Rum Jhum (DD National) and went in IHHDC. In year 2015 he shifted to Mumbai he started his first choreography in Jamai Raja as Assistant and then he start to work in Bhabhiji Ghar Par Hain, Ganga, ABCD 2. He choreographed Salman Khan as an Assistan Choreographer in Star Awards.

Sharma mentioned Ravi Dubey as his mentor who helped in his career to achieve most of the success he got. Sharma worked for Mohenjo Daro, Devo ke Dev Mahadev, I can do that, Suhani si ek ladki, and more.

In 2016 he started his Creative India Productions under which he started a Youtube Web research show which was released in 2018 as Mysterious India he Launched its trailer which successfully crossed a number of 100,000+ viewership in a week. In year 2018 he teamed up with Ankit Narang, Chirag Sharma and Chetan Chatrath in Mysterious India Web show. and announced his upcoming webshow "Or Batao" in 2019.

Sharma awarded with IHHDC Champions, He got Queens medal from England in 2016.

Bollywoodofficials has made the last revision of the following page(s) :

Retrieved from "https://en.everybodywiki.com/index.php?title=User:Bollywoodofficials&oldid=269987"
Hidden categories:
This page was last edited on 22 December 2018, at 15:25.
This page has been accessed 477 times.
Content is available under License CC BY-SA 3.0 unless otherwise noted.
Privacy policy
About EverybodyWiki Bios & Wiki
Disclaimers