Vinod Kumar Dwivedi (born 10 May 1961) is an Indian classical vocalist in the Dhrupad-Dhamar genre of Hindustani classical music.[1][2]

Dwivedi was born in a middle-class family in Banda, Uttar Pradesh. During his childhood, Dwivedi was trained by his maternal uncle and others. He got an MA in Political Science and passed the UGC NET lectureship examination (Music).[1][2] 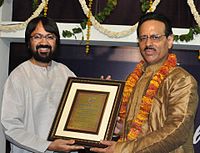 Dwivedi is an artist at All India Radio (AIR) and Doordarshan in Lucknow. He is also an ICCR panel artist, and an examiner at the Bhatkhande Vidyapeeth, Banaras Hindu University (BHU), Bhatkhande Demmed University and Allahabad Prayag Sangeet Samiti. He is a lecturer of music at Jugal Devi Saraswati Vidya Mandir and Director of Ranjana Devi Sangeet Mahavidhyala, both in Kanpur. He also performed in many prestigious concerts like Dhrupad Mela, Haridas sangeet sammelan, All India music festival,[3] Many iccr programs in India as well as abroad.[4] In 2011, he also performed in Colombo, Sri Lanka under a program jointly organised by Bhatkhande Vidyapeeth, Lucknow and ICCR COLOMBO (Sri Lanka).[2] He has recorded cassettes and CDs by Agi Music, Bihaan Music, Vidhya Bharti and Sangeet natak academy records.

Share
Retrieved from "https://en.everybodywiki.com/index.php?title=Vinod_Kumar_Dwivedi&oldid=848505"
Categories:
Hidden categories:
This page was last edited on 14 July 2020, at 05:00.
Content is available under License CC BY-SA 3.0 unless otherwise noted.
This page has been accessed 718 times.
Privacy policy
About EverybodyWiki Bios & Wiki
Disclaimers