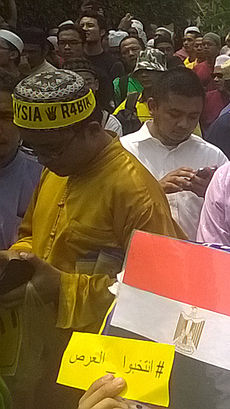 "Vote for pimp" or "vote for the pimp" (Arabic: انتخبوا العرص‎) is a slogan that became popular during Abdel Fattah el-Sisi's election campaign, after he seized power in the 2013 Egyptian coup d'état. The slogan opposed Sisi's campaign through mockery, and is based on a phrase coined during the British colonial period in Egypt.

The term (Arabic: العرص‎), translates in English to "the pimp," sometimes used as a nickname for Al-Sisi (pimp العرص or السيسي العرص ). Egyptians used the term during the British colonial era to describe a policeman who monitors prostitutes in their profession.[1] The expression evolved recently into a popular hashtag against the 2013 Egyptian coup d'état leader Abdel Fattah el-Sisi after he announced his candidacy for the upcoming presidential election.[2][3][4] The term has been used to refer to the general's supporters by some Egyptian activists since September 2013.[5]

Keyhole reported that the hashtag started circulating social media on the 26 of March 2014,[6] when General Sisi announced his candidacy for the presidency.[7]

According to the tracking website, Keyhole, the hashtag achieved more than 100 million uses within days of creation, and generated tens of thousands of messages on Twitter. Keyhole states that 23 percent of the hashtag's uses came from outside Egypt.[8]

As of 2 April 2014, almost one week after the campaign started, the number of uses surpassed 490 million.[9] On 7 April 2014, Aljazeera reported that the hashtag was broadly popular.[10]

Since the campaign started, a trend has been going on in Egypt to paint and write the hashtag onto walls and government property. Most notably government buses.[11] Moreover, the hashtag popularity encouraged some people who are computer illiterate to insult the coup's leader.[12] On 1 April 2014, 4 days after the hashtag has been trending, the Android play store published an app allowing users to follow on the topic updates and trends. The app received an overwhelming response from users, where 78 out of 81 who rated the app gave it 5 stars.[13] Two weeks later, some Americans used the alternative hashtag #Vote_for_the_pimp to protest against the Egyptian finance minister, who was in the U.S. after being invited by the United States Chamber of Commerce (USCC).[14][15]

On 26 May 2014, the day preceding the Egyptian presidential election, 2014, signs reading "Vote for the pimp" were seen hung across the country and some representations of the same slogan had been put into graffiti.[16][17][18] On the same day, it was reported that an image of the face of Abdel Fattah al-Sisi had been stamped on a trash bin, with the popular "Vote for the pimp" slogan written in Arabic.[19] As of 28 May 2014, the last day in the elections, the turnout was the lowest possible with efforts to bring in more voters expressed by country officials and various state-linked media channels.[20] While some attribute the boycott to earlier calls by the Muslim Brotherhood in Egypt, others see it as a reflection of Abdel Fattah el-Sisi's unpopularity.[21][22]

After the trend went global, some popular Egyptian television presenters were reported asking the government to block Twitter as a counter measure. However, the move was not carried out.[23]

Other articles of the topics Egypt AND Politics : Ahmad Al-Shahhat

Share
Retrieved from "https://en.everybodywiki.com/index.php?title=Vote_for_pimp&oldid=1173977"
Categories:
Hidden categories:
This page was last edited on 23 December 2020, at 09:01.
Content is available under License CC BY-SA 3.0 unless otherwise noted.
This page has been accessed 738 times.
Privacy policy
About EverybodyWiki Bios & Wiki
Disclaimers