Search Vulpix and Ninetales on Amazon.

Vulpix (/ˈvʌlpɪks/) and Ninetales (/ˈnaɪnteɪlz/), known in Japan as Rokon (ロコン) and Kyukon (キュウコン, Kyūkon), are two fictional creatures, linked by evolution, in Nintendo and Game Freak's Pokémon media franchise. Ninetales evolves from Vulpix when exposed to a Fire Stone or Ice Stone in the case of Alolan Vulpix. Designed by Atsuko Nishida,[1] they first appeared in the video games Pokémon Red and Blue and later appear in subsequent sequels, various merchandise, spinoff titles, and animated and printed adaptations of the franchise. They are known as the Fox Pokémon.

Both Vulpix and Ninetales are known as the Fox Pokémon, and are both Fire types with multiple tails.

Nintendo decided to give the various Pokémon species "clever and descriptive names" related to their appearance or features when translating the game for western audiences as a means to make the characters more relatable to American children.[2] It was originally going to be named Foxfire in the English versions until Nintendo of America settled with Vulpix, which is based on "vulpus", the Latin word for fox.[3]

Vulpix is a fox-like creature with six curled tails, based on the Japanese fox spirit kitsune. From birth, Vulpix starts out with only one tail, which is white in color; this tail splits apart as it grows and turns red.[4][5] Most commonly female, Vulpix are especially known for having beautiful fur and tails.[6] Vulpix have a flame in their bodies, which when the temperature outside increases, they let out of their mouths to prevent their body temperature from getting too hot.[7] They can control this fire, and make them fly like will-o'-the-wisps.[8] In the wild, Vulpix will feign injury to escape from more powerful predators.[9]

An unevolved "baby" version of Vulpix, named Trifox, was designed for the 1999 video games Pokémon Red and Green, however, this creature was cut twice from the games before release. In a 1997 prototype version of Pokémon Gold and Silver, Trifox is a water-type Pokémon, unlike its fire-type evolutions Vulpix and Ninetales.[10]

Ninetales, is a golden-white nine-tailed fox, based on the kitsune, a Japanese fox spirit.[11] The Kyūbi (九尾), which held similar powers such as shapeshifting, were the main inspiration for the Pokémon. Ninetales' name was derived from the number of its tails, nine, and the fact that the idea for it came primarily from ancient Japanese tales.[11] 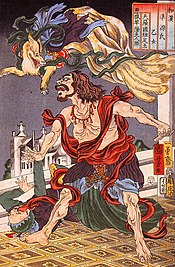 A print by Utagawa Kuniyoshi depicting the nine-tailed fox (above) which inspired Ninetales.

This fox-like Pokémon is covered with a thick, luxurious golden-white fur, with a fluffy crest atop its head and a similar ruff around its neck. Ninetales have gleaming red eyes that are said to give them the power of mind control.[12] Its nine different tails hold strange, cosmic powers[13][14] that let it live for 1000 years.[15] Ninetales are highly intelligent Pokémon that understand human speech.[16] They are very vengeful and have been known to curse those who mistreat them for 1000 years.[17][18] Many legends surround this Pokémon, one of which states that Ninetales was born when nine saints were united and reincarnated as this Pokémon.[19]

In the video games[edit]

Vulpix and Ninetales first appeared in Pokémon Red and Blue, though it was only obtainable without trading in Blue. It has since appeared in every main Pokémon title since, including remakes of the original games including Pokémon Yellow and Pokémon FireRed and LeafGreen. Outside of the main titles, it appears in the Pokémon Pinball titles, Pokémon Trozei!, the Pokémon Mystery Dungeon titles, the Pokémon Ranger titles, Pokémon Rumble, PokéPark Wii: Pikachu's Adventure. Vulpix and its Alolan counterpart also appear from Poké Ball items in Super Smash Bros. Ultimate, and as Spirits. If the Vulpix Spirit is equipped, the fighter starts the battle with a Fire Flower, and if Alolan Vulpix is equipped, the fighter starts the battle with a Freezie.

During the first season of the Pokémon anime, Vulpix appears often as one of Brock's Pokémon. It is given to him by a girl named Suzy who feels she cannot take care of it as well as Brock could. Brock later meets up with Suzy in Johto and returns it to her. In Magical Pokémon Journey, Kiaraway, a Fire-type Pokémon Trainer, owns a female Vulpix. She is one of his most used Pokémon, first appearing with Cyndaquil. In Pokémon Adventures, Flannery owns a Vulpix that she used to battle Shelly's Ludicolo, but only succeeded in sealing its Nature Power attack before fainting. Years earlier, in the Yellow chapter, Bill also has a Vulpix, which is beaten easily by Green's Blastoise. In Pokémon Battle Frontier, the main character, Enta, has a powerful and loyal Vulpix.

Ninetales first appeared in the anime in Beauty and the Breeder. A friend of Suzy named Zane had a Ninetales and used it in a Pokémon breeding contest. In Just Waiting On A Friend, a very old Ninetales befriended Brock, who bore a resemblance to her long lost master. This Ninetales created all sorts of illusions, including one of a woman through which it spoke. Many other Ninetales have made minor appearances such as one being used by Blaine to battle Ash in their Gym battle.

In Season 20: Pokémon the Series: Sun & Moon, Episode 14, an Alolan Vulpix hatches from an egg that was found on the top of Mount Lanakila, Vulpix was captured by Lillie later in said episode and was used to fend off Team Rocket, following this Lillie partially got over her fear of touching Pokémon, being able to touch Vulpix. In addition to this, a normal Vulpix hatches from the egg Ash brings from Professor Samuel Oak to Alola and is now in the care of his Cousin, Principal Samson Oak.

In the Pokémon Adventures manga, Red and Blue both tried catching the same Ninetales. In the scuffle for its Poké Ball, Blue managed to grab it first. Magma Admin Courtney uses a Ninetales as her main battler. In 'Pokémon Mystery Dungeon: Ginji's Rescue Team, the curse that Ninetales can conjure is one of the main points of the plot.

IGN described Vulpix as "one of the most adorable things you've ever seen", arguing that they felt the character was cuter than series icon Pikachu.[20][21] IGN's Pokémon Chick called Vulpix "second place" for her in a number of different categories in spite of her desire to raise a Vulpix.[22] Author Loredana Lipperini called it "totally kawaii", as well as "round and graceful".[23] GamesRadar's Brett Elston called it "undeniably cute" but inferior to Growlithe.[24] Authors Tracey West and Katherine Noll named Vulpix the fifth best Fire type Pokémon and wrote that Vulpix was "cute and cuddly" and "special".[25] Author Maria S. Barbo wrote that Vulpix had a "cute exterior" which "hides inner strength".[26]

Ninetales has had generally positive reception. IGN called Ninetales "one heck of a Pokemon that too many people tend to overlook" and a surprise "bombshell-dropper".[27] The reviewer continued, exaggerating that Ninetales may be "considered the new god of all that is holy."[27] IGN also called it "one of the most visually impressive Pokemon."[28] IGN readers ranked it the 31st Pokémon ever. IGN's Kristine Steimer called it "elegant and powerful" and called it "one of the more impressive evolutions" from Pokémon Red and Blue.[29] Game Informer's O'Dell Harmon also ranked it at 31 on his list of the best Pokémon.[30] The Capital Times concurred that Ninetales was "particularly powerful".[31] However, IGN also noted that the character served little purpose until later games beyond looking attractive.[27] Many reviewers have commented on the perceived aesthetic beauty of Ninetales. IGN claimed that, while Ninetales may not be as cute as other Pokémon in the series, it makes up for this with sheer beauty.[27] Another noted Ninetales primarily for its visual appeal.[11] Several sources have commented on Ninetales' name, with various reporters calling it "whimsical"[32] and "fanciful".[33] Another IGN reviewer expressed a particular fondness for Ninetales, calling it "elegant".[34] Kotaku's Patricia Hernandez cited Ninetales as one of the better Pokémon Red and Blue due to its "elegance."[35]

Share
Retrieved from "https://en.everybodywiki.com/index.php?title=Vulpix_and_Ninetales&oldid=1773258"
Categories:
Hidden categories:
This page was last edited on 19 June 2021, at 20:46.
Content is available under License CC BY-SA 3.0 unless otherwise noted.
This page has been accessed 625 times.
Privacy policy
About EverybodyWiki Bios & Wiki
Disclaimers