WAPT[1] is an automated deployment, update and removal software of packages for Windows, developed in France by Tranquil IT[2]. It can be used to install software packages such as installers, service packs, hotfixes from a WAPT central server or replicated web servers.

It can be run as a service, to install software in the background, without interaction with the user. Configured as such, it can work even if the user who opens the session does not have administrator's privileges. New packages are downloaded and cached at regular interval and installation is triggered at shutdown or on a fixed schedule.

WAPT also offer through a self-service interface a software catalog as an App_store to let normal users without administrator rights to install approved software on their workstation.

On February 14, 2018, the WAPT Enterprise 1.5.0.13 received the CSPN (First Level Security Certification) from the French Cybersecurity Agency of France ANSSI.[3] In March 2018, WAPT also has been granted the more selective "Qualification Elémentaire" status, which "is the French state’s recommendation of cybersecurity products or services that have been tested and approved by ANSSI".[4]

The WAPT project was launched in April 2012. The name WAPT is a neologism derived from the concatenation of the initial of Windows and the name of the tool Apt-Get. Apt-Get is the package installation tool for Debian operating systems and its derivatives such as Ubuntu. The initial goal was to was to port the concepts, ideas and the ease of use of Debian package management to Windows. In its early versions, WAPT could only be used on the command line using the command wapt-get.exe, and did not have a running agent as a service. Plus, like Apt-Get on Linux, these first versions of the wapt-get.exe utility did not allow remote control from a centralized console, nor did they send inventory or package installation status feedback.

WAPT 1.0.0 was released in February 2015 and had at the same time : an administration console, basic inventory management and a WaptAgent service on Windows workstations. Versions 1.1 and 1.2 arrived quickly in the following year to fix bugs reported by an increasingly community of users.

In November 2016, WAPT 1.3 version was released, which, with its minor sub-versions, remained the major public version for a year and a half. This is the most deployed version currently.It has benefited from a large set of patches. It provided Centos7 servers support in addition to Debian, Ubuntu and Windows servers.

The 1.5.0 version of WAPT was an intermediate version published only in an "Enterprise" version and used as basis for the passage of the National Cybersecurity Agency of France First Level Security Certification.

WAPT 1.5.1 was released in March 2018 and introduced several technological changes:

An exhaustive changelog is available in the WAPT documentation.[5]

WAPT enables System Administrators to easily carry on installations, updates and deletions of software or configuration on workstations. It is also possible to run custom python scripts on workstations, such as configuration for time synchronization, print settings, files permissions change or adding entries in the registry. Here is a summary of the functions of WAPT:

A WAPT server can be installed on different operating systems:

WAPT agent supports Windows workstations from Windows 10 down to Windows XP, both in 32 and 64 bits installation. Even if the main usage of WAPT is done in an Active Directory environment with local agent enabled, WAPT still can:

Since the version 1.0.0, WAPT have a graphical user interface in Free Pascal allowing a more intuitive management of deployed packages. The password of the WAPT server administrator is required to access it and it allows you to view all the connected workstations, the packages & software installed on them as well as various information too : 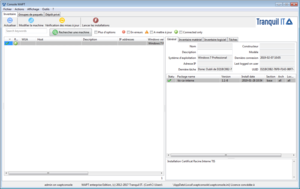 Starting with version 1.7, released in February 2019, WAPT now manages Windows updates and can replace a server WSUS[6]. WAPT agent manages the WUA (Windows Update Agent) to compute the required updates and downloads the KBs hosted on WAPT server. The computation of the necessary updates is performed by the WUA engine, which ensures that all necessary updates are properly installed. This feature is only available in WAPT Enterprise version.

The WAPT package's public repository (store) [7] offers a list of hundreds software packages already prepared and packaged, ready to be downloaded and used. If the software you need is not already present on the store, WAPT provides a working environment to create new packages based on PyScripter.

It is possible to automatically generate a packet from an MSI directly from the console or with a command-line with the utility wapt-get make-template.

For more complex softwares, you can launch a PyScripter environnment that helps the administrator in creating the package.

French schools were among the first to deploy WAPT on a massive scale. For example, all 147 high schools in the French region of "Nouvelle-Aquitaine" are using it for their day to day software deployment and updating. The Academy of Lille also offers tutorials directly on its website for the installation for its schools.[8]

Several French Universities are leveraging WAPT for their day to day desktop maintenance, such as the University of Lille[9] and the University of Valenciennes. WAPT is also on the agenda for some BTS SIO (French technician community college certificate), notably in the Limoges[10] academy.

WAPT is also used in research laboratories such as INRA and SupAgro Montpellier. WAPT was a topic of presentation at the JRES conference[11] (Journées Réseau de l'Enseignement Supérieur, the biannual conference of higher education and research lab IT staff). A sysadmin group dedicated to host a WAPT package repositories for common softwares used throughout French research lab has been setup at University of Strasbourg.[12]

Even though WAPT is still mainly used in French speaking countries, it's beginning to be also used in Brazil like in the state of Rio Grande do Sul by the Federal_Institute_of_Rio_Grande_do_Sul on the Sertão campus for remote installation of packages, where it's currently serviced 5 info labs with 30 computers each and more than 100 computers to the administrative servants that works in several areas in this Institution.

Other articles of the topic Information technology : ARMv7TDMI

Other articles of the topic Free Software : Base4 (software), Erlstore, JBoss SSO, H2desk, Galago (software), Community source, DBMail IMAP and POP3 server
Some use of "" in your query was not closed by a matching "".

Share
Retrieved from "https://en.everybodywiki.com/index.php?title=Wapt_(logiciel)&oldid=979671"
Categories:
Hidden category:
This page was last edited on 22 August 2020, at 02:25.
Content is available under License CC BY-SA 3.0 unless otherwise noted.
This page has been accessed 1,951 times.
Privacy policy
About EverybodyWiki Bios & Wiki
Disclaimers