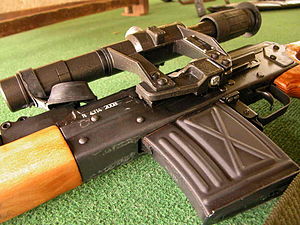 Warsaw Pact rail is a rail mount system to connect aiming optics like telescopic sights to rifles by using a dovetail rail mounted on the left side of the rifle receiver. The mounting system is used in the PSO-1 optical sight, and corresponding rails can be found on rifles such as the Dragunov sniper rifle the PSL rifle as well as on AK assault rifles from 1954 on. However, as early as 1992 the side rail mount became standard on all AK rifles.