Wright Manufacturing, Inc. is an American lawn care equipment manufacturing company, located in Frederick, Maryland. Wright is a global manufacturer of heavy-duty commercial zero-turn mowers and accessories, with markets across the United States, Europe, Africa, Australia, and the Caribbean.

Wright has been revolutionary in the commercial lawn maintenance industry, inventing the stand-on style of mower and other mowing accessories that have been adopted by industry leaders across the globe. The company maintains a 99,400 square-foot manufacturing plant that emphasizes Lean manufacturing principles to reduce waste. 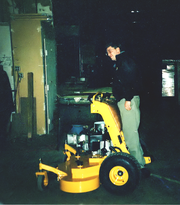 Founded in 1981 as Lawn-Wright, Inc., a lawn maintenance company, founder William "Bill" Wright pivoted into manufacturing in 1983 after inventing an all-metal grass collector accessory that was able to be attached to the mowers he was using in his fleet. Wright continued designing accessories and in the late 1980's introduced the first single-wheel stand-on Sulky, an attachment that allowed for the operator to stand while mowing.[1] Wright was granted US patent 5004251  for the Sulky attachment in 1991.

By 1993, the company's focus shifted to manufacturing a complete mower with an innovative design. Wright sold the lawn maintenance and software divisions of Lawn-Wright,[1] rebranding the company as Wright Manufacturing, Inc. Wright was granted US patent 5507138  in 1995 and introduced the first stand-on mower to the market in 1997.[2][3]

In 2012, the company entered into agreement with John Deere to manufacture stand-on mowers using Wright's patented technology.[6] Wright elected not to extend the agreement beyond May 2016.[7]

Retrieved from "https://en.everybodywiki.com/index.php?title=Wright_Manufacturing,_Inc.&oldid=981980"
Categories:
Hidden categories:
This page was last edited on 22 August 2020, at 20:59.
This page has been accessed 727 times.
Content is available under License CC BY-SA 3.0 unless otherwise noted.
Privacy policy
About EverybodyWiki Bios & Wiki
Disclaimers