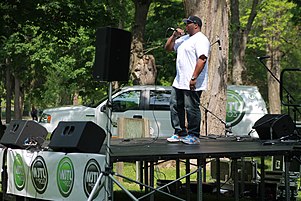 Young is also the CEO and organizational founder[5] of the independent record label Mercy Time Records[6][7] and owner of the fashion line WeOnGod clothing.[8][9]

Young Able is widely and professionally known as a Christian hip hop artist and singer.[10] Young is a music producer as well and known in the hip hop community for his faith-based lyrics and personal belief in God.[11] From his early years as a child Young developed a passion for music and began his rap career in 2012.[12] In 2015 My Testimony was released and garnered attention from the Contemporary Christian music community. Young released Modern Spiritual Warfare two years later in 2017 after releasing a series of four mix tapes. In 2018 Young released 3 singles and the following year released the EP Walk by Faith. On August 10, 2020, Young released his third album No Limits and in 2021 released his fourth studio album Freedom.

Young Able is from Pennsylvania and is married with four children. He is an active leader in his local church and does evangelical outreaches across communities. In addition to concerts and touring worldwide Young is an advocate for criminal reform, recovering mental health patients, and victims of injustice and police brutality.

Young Able's first mix tape is titled The Best Is Yet to Come"[13] This mix tape was also released on Datpiff.com[14]

My Testimony[15] Young Able's debut album featured rapper Pookie wit tha Uzi[16] and singer Juliana Lane.[17] In the World but Not of It volumes 1 and 2 mixtapes were a series of lyrics and instrumentals re-produced by Young Able.

Walk By Faith[20] the EP is a solo independent release from Young Able.

Share
Retrieved from "https://en.everybodywiki.com/index.php?title=Young_Able&oldid=2375485"
Categories:
Hidden categories:
This page was last edited on 30 March 2022, at 10:58.
Content is available under License CC BY-SA 3.0 unless otherwise noted.
This page has been accessed 274,514 times.
Privacy policy
About EverybodyWiki Bios & Wiki
Disclaimers