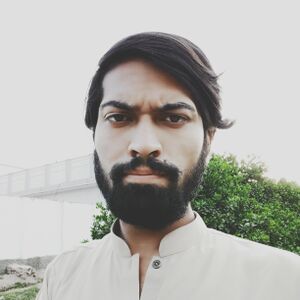 Zeshan Khan is born in village Makhdum Pur district Khanewal in punjab, Pakistan. Khan has been received early education in Oxford Public School in the village Makhdum Pur. After completed F.A from the higher secondary school. After that got admission in the Bahauddin Zakariya University in Multan for Bachelor (hons) classes from the prestigious Multan College of Arts.

Zeshan Khan is a Pakistani actor, model, artist, singer, musician, film and music producer[1]. He is known for being one of Asia most Versatile multi talented and Celebrated artist. He has received many Awards and nominations and is considered a national hero for his contributions to Pakistan's burgeoning music and film industry.

Zeshan Khan has been received "65th Filmfare Award" in Hindi Bollywood film industry in 2020[2] as "Self" (Best Debut Actor).

Zeshan Khan has been received 19th Lux Style Awards in Pakistan film industry in 2019 as a Self (Best Actor) by an Winner Awards.

Retrieved from "https://en.everybodywiki.com/index.php?title=Zeshan_Ali_Khan&oldid=1844621"
Hidden categories:
This page was last edited on 30 July 2021, at 17:37.
This page has been accessed 250 times.
Content is available under License CC BY-SA 3.0 unless otherwise noted.
Privacy policy
About EverybodyWiki Bios & Wiki
Disclaimers
Dark mode