Adorned in Ash (AiA) is a female fronted South African Christian Metal band from Pretoria, South Africa, formed in 2008. AiA is active in the live metal scene in Southern Africa and released their debut album, 'The Dead Walk Among Us' on 1 February 2014.

Adorned in Ash was formed by drummer Mark Ivey and vocalist Marius Visagie in October 2008 with the aim to deliver a Christian Metal band at the extremes of various subgenres of metal including (but not limited to) Death Metal, Black Metal, Doom Metal, Thrash Metal, Tech Metal and Progressive Death Metal. The band is decidedly Christian and all lyric themes are based on life experiences of band members, current affairs regarding faith, relationships with Jesus Christ and issues regarding faith versus organized religion. The original lineup consisted of Mark Ivey and Marius Visagie who approached good friend and guitarist Christo Visser to be guitarist for AiA in October 2008. In March 2009 Gideon Jones was recruited as second guitarist, followed by Shane Minne on Bass in September 2009.

After having been a full band for one week Christo Visser was tragically killed in a freak motorcycle accident at the age of 19. After a period of two months wherein it was uncertain whether the band would continue after his death, the band decided to continue and recruited Robyn Ferguson to fill the position of second guitarist (December 2009). In February of 2010 the band had their first live performance. In June 2010 bassist Shane Minne left the band and was replaced by Ryhno von Hagen, whose first 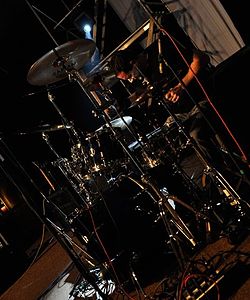 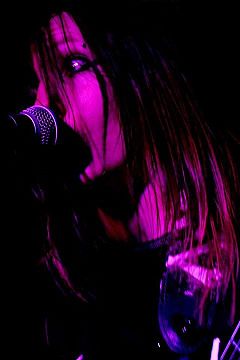 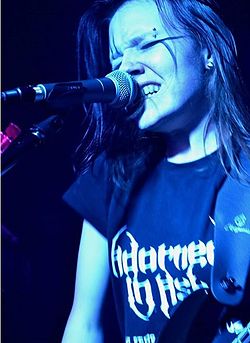 Leon van Rensburg live with Adorned in Ash in 2014
gig with the band was to open for Becoming the Archetype at a performance during their South African tour. In January 2011 guitarist Gideon left the band and was replaced by guitarist Jacques du Toit in March 2011. During April of 2011 vocalist Marius left the band due to personal commitments. After unsuccessful attempts to find a worthy replacement to Marius' vocal style, guitarist Robyn Ferguson stepped up and "shocked the band" with her hidden vocal talents. She was appointed guitarist and lead vocalist in April 2011. In March 2012 both guitarist Jacques du Toit and bassist Rhyno von Hagen left the band due to personal and work commitments with only Mark Ivey and Robyn Ferguson remaining. After a period of personal tragedy, illness and lack of band members it was decided that AiA would "forge ahead in faith!". In May 2012 bassist Marinus Terblanche joined the band, followed by guitarist Leon van Rensburg one week later to form the current lineup.

Robyn Ferguson mainly uses The Zen Of Screaming as her vocal training. This is a series of instructional DVD's and online-tuition by Melissa Cross aimed at "unclean" vocal techniques such as growled or screamed vocals found in certain metal subgenres. She also spends a lot of time experimenting and pushing her vocal range, technique and style to get variations of tone, pitch and sustain in the music, ranging from unique death to black metal vocals. Robyn is often asked about her vocal abilities and is very willing to share her technique. She is a strong believer in using the correct technique and working hard at her craft, but most of all she feels blessed with the ability.

Adorned in Ash is known for their use of corpse paint on stage for every show. The corpse paint is a physical representation the spiritual warfare and of going into battle. Except for the 'war paint' they also blow a shofar at every show as a battle cry and a signal of victory over death. This battle and the blowing of the shofar in victory is depicted at the start of every show and has also come to be the intro as first track on the debut album.

After four years in the making, Adorned in Ash launched their debut album 'The Dead Walk Among Us' on the 1st of February 2014 at Metal4Africa's annual Summerfest in the Klein Libertas Theater, Stellenbosch, South Africa. The album was recorded at South African guitar legend Nathan Smith's Open Track Studios in Pretoria. Due to the member changes the album has seen recording work done by all the members from 2010 onward, with selected parts being updated with Robyn's vocals where they were originally performed by Marius Visagie. The album was mixed and mastered by Robyn Ferguson and Adorned in Ash. In the period of 2011 to 2015 Adorned in Ash have been on the line up for various events including being a supporting act for Becoming the Archetype in 2010, Rock Nights at the South African State Theatre in 2012 and 2013, Metal4Africa's Summerfest 2014, Gorofest 2014 in Maputo (Mozambique), Wolmerfest 2014, Emalyth Arts Expo 2012 and 2014 and Witchfest 2015

Adorned in Ash in the media[edit]

Adorned in Ash has been active in the local (South African) and international metal scene since 2010 with interviews given on Total Biker FM with Angeless Tbfm WolfHunter Watkins-Gallar and on Mozambican television with Goro Fast whilst visiting Maputo for Goro Fest.[1]

AiA have also had multiple air plays on:

AiA in other media[edit]

AiA has been featured in many publications including the following: 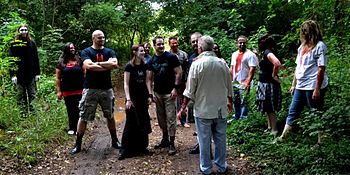 The Dead Walk Among Us Photo Shoot Behind the scenes_2013
During April 2013 Adorned in Ash and a group of friends, family and fans got together to do a themed photo shoot for the upcoming album release for 'The Dead Walk Among Us'. The footage was used as pre-launch teasers as well as very prominently on the album cover and in the album booklet. The metaphorical meaning for the dead (they without faith), was taken more literally with the 'dead' being portrayed as zombies creeping ever closer to the band and individual band members. Vlademirovka Photography handled all the work behind the cameras for the album art and the make-up was done by the band and friends. The scene was set in the surrounds near the Jan Smuts House in Irene, Pretoria.

'The Dead Walk Among Us' album track listing[edit]

Retrieved from "https://en.everybodywiki.com/index.php?title=Adorned_in_Ash&oldid=1805119"
Categories:
Hidden categories:
This page was last edited on 5 May 2015, at 17:32.
This page has been accessed 40 times.
Content is available under License CC BY-SA 3.0 unless otherwise noted.
Privacy policy
About EverybodyWiki Bios & Wiki
Disclaimers