Tolley signed with Ilford Football Club in July of 2019 after being with Bishops Stortford since January 2019 when spotted in a showcase match, he scored on his debut at the ProKit Stadium against Hertford Town Isthmian League South Central Division in the Bostik League in January 2019. 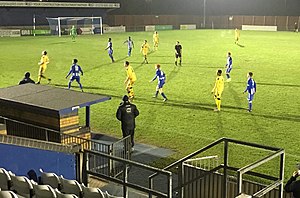 |Tolley in preseason action for

Tolley was born in Canandaigua, NY, USA, and is of English descent. He is a UK citizen through his father former Tampa Bay Rowdy player Paul Tolley [5]. Tolley has long been identified as an extremely intelligent tactical and two footed player. He was initially spotted in 2015 by Charlton Athletic, while playing for the GSI Pittsford Hawks and was picked as a 2016 National Selection for Charlton Athletic FC camp in New Eltham, London UK. 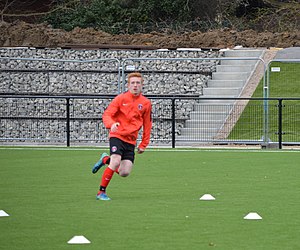 In 2017 Tolley signed a National Letter of Intent with the NCAA to play for the Daemen Wildcats Daemen College and appeared 38 times for the Wildcats prior to joining the Bostik League. Tolley also Featured in the US Olympic Development program representing region 1.[6]

Tolley is also a gifted endurance athlete competing in Nordic and the 3200 meters.[7][8]

Retrieved from "https://en.everybodywiki.com/index.php?title=Aiden_Tolley&oldid=878619"
Hidden categories:
This page was last edited on 21 July 2020, at 12:14.
This page has been accessed 853 times.
Content is available under License CC BY-SA 3.0 unless otherwise noted.
Privacy policy
About EverybodyWiki Bios & Wiki
Disclaimers