This article is about the star in the constellation Aquila. For other uses, see Altair (disambiguation).

Altair (/ˈæltɛər, -taɪər, ælˈtɛər, -ˈtaɪər/), also designated Alpha Aquilae (α Aquilae, abbreviated Alpha Aql, α Aql), is the brightest star in the constellation of Aquila and the twelfth brightest star in the night sky. It is currently in the G-cloud—a nearby accumulation of gas and dust known as an interstellar cloud.[12][13] Altair is an A-type main sequence star with an apparent visual magnitude of 0.77 and is one of the vertices of the asterism known as the Summer Triangle (the other two vertices are marked by Deneb and Vega).[4][14][15] It is 16.7 light-years (5.13 parsecs) from the Sun and is one of the closest stars visible to the naked eye.[16]

Altair rotates rapidly, with a velocity at the equator of approximately 286 km/s.[nb 2][6] This is a significant fraction of the star's estimated breakup speed of 400 km/s.[9] A study with the Palomar Testbed Interferometer revealed that Altair is not spherical, but is flattened at the poles due to its high rate of rotation.[17] Other interferometric studies with multiple telescopes, operating in the infrared, have imaged and confirmed this phenomenon.[6]

α Aquilae (Latinised to Alpha Aquilae) is the star's Bayer designation. The traditional name Altair has been used since medieval times. It is an abbreviation of the Arabic phrase النسر الطائر, al-nesr al-ṭā’ir ("the flying eagle"). In 2016, the International Astronomical Union organized a Working Group on Star Names (WGSN)[18] to catalog and standardize proper names for stars. The WGSN's first bulletin of July 2016[19] included a table of the first two batches of names approved by the WGSN, which included Altair for this star. It is now so entered in the IAU Catalog of Star Names.[20] 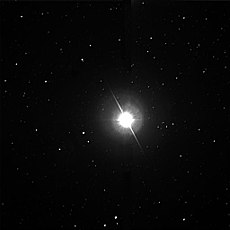 Along with Beta Aquilae and Gamma Aquilae, Altair forms the well-known line of stars sometimes referred to as the Family of Aquila or Shaft of Aquila.[21]

Altair is a type-A main sequence star with approximately 1.8 times the mass of the Sun and 11 times its luminosity.[6][7] Altair possesses an extremely rapid rate of rotation; it has a rotational period of approximately 9 hours.[7] For comparison, the equator of the Sun requires a little more than 25 days for a complete rotation. This rapid rotation forces Altair to be oblate; its equatorial diameter is over 20 percent greater than its polar diameter.[6]

Satellite measurements made in 1999 with the Wide Field Infrared Explorer showed that the brightness of Altair fluctuates slightly, varying by just a few thousandths of a magnitude with several different periods less than 2 hours.[5] As a result, it was identified in 2005 as a Delta Scuti variable star. Its light curve can be approximated by adding together a number of sine waves, with periods that range between 0.8 and 1.5 hours.[22] It is a weak source of coronal X-ray emission, with the most active sources of emission being located near the star's equator. This activity may be due to convection cells forming at the cooler equator.[9]

The angular diameter of Altair was measured interferometrically by R. Hanbury Brown and his co-workers at Narrabri Observatory in the 1960s. They found a diameter of 3 milliarcseconds.[23] Although Hanbury Brown et al. realized that Altair would be rotationally flattened, they had insufficient data to experimentally observe its oblateness. Altair was later observed to be flattened by infrared interferometric measurements made by the Palomar Testbed Interferometer in 1999 and 2000. This work was published by G. T. van Belle, David R. Ciardi and their co-authors in 2001.[17]

Altair is one of the few stars for which a direct image has been obtained.[26] In 2006 and 2007, J. D. Monnier and his coworkers produced an image of Altair's surface from 2006 infrared observations made with the MIRC instrument on the CHARA array interferometer; this was the first time the surface of any main-sequence star, apart from the Sun, had been imaged.[26] The false-color image was published in 2007. The equatorial radius of the star was estimated to be 2.03 solar radii, and the polar radius 1.63 solar radii—a 25% increase of the stellar radius from pole to equator.[6] The polar axis is inclined by about 60° to the line of sight from the Earth.[9]

The term Al Nesr Al Tair appeared in Al Achsasi al Mouakket's catalogue, which was translated into Latin as Vultur Volans.[27] This name was applied by the Arabs to the asterism of α, β, and γ Aquilae and probably goes back to the ancient Babylonians and Sumerians, who called α Aquilae the eagle star.[28] The spelling Atair has also been used.[29] Medieval astrolabes of England and Western Europe depicted Altair and Vega as birds.[30]

The Koori people of Victoria also knew Altair as Bunjil, the wedge-tailed eagle, and β and γ Aquilae are his two wives the black swans. The people of the Murray River knew the star as Totyerguil.[31] The Murray River was formed when Totyerguil the hunter speared Otjout, a giant Murray cod, who, when wounded, churned a channel across southern Australia before entering the sky as the constellation Delphinus.[32]

In Chinese, the asterism consisting of α, β, and γ Aquilae is known as Hé Gǔ (河鼓; lit. "river drum").[29] Altair is thus known as Hé Gǔ èr (河鼓二; lit. "river drum two", meaning the "second star of the drum at the river").[33] However, Altair is better known by its other names: Qiān Niú Xīng (牵牛星) or Niú Láng Xīng (牛郎星), translated as the cowherd star.[34][35] These names are an allusion to a love story, The Cowherd and the Weaver Girl, in which Niulang (represented by Altair) and his two children (represented by β and γ Aquilae) are separated from respectively their wife and mother Zhinu (represented by Vega) by the Milky Way. They are only permitted to meet once a year, when magpies form a bridge to allow them to cross the Milky Way.[35][36]

In Western astrology, the star Altair was ill-omened, portending danger from reptiles.[29]

Altair Airlines was a regional airline that operated out of Philadelphia from 1966 to 1982.

The NASA Constellation Program announced Altair as the name of the Lunar Surface Access Module (LSAM) on December 13, 2007.[38] The Russian-made Beriev Be-200 Altair seaplane is also named after the star.[39]

The Altair 8800 was one of the first microcomputers intended for home use.

Altair is the name of a 1919 poem by Karle Wilson Baker.

Three of them walk together-
She is the fairest of three;
And sweet as the heavenly weather
She maketh the heart of me!"[40]

The bright primary star has the multiple star designation WDS 19508+0852A and has three faint visual companion stars, WDS 19508+0852B, C, and D. Component B is not physically close to A but merely appears close to it in the sky.[10]

Retrieved from "https://en.everybodywiki.com/index.php?title=Altair&oldid=60408"
Categories:
Hidden categories:
This page was last edited on 15 August 2018, at 11:57.
This page has been accessed 384 times.
Content is available under License CC BY-SA 3.0 unless otherwise noted.
Privacy policy
About EverybodyWiki Bios & Wiki
Disclaimers
Mobile view